Finding clean, cheap, uninterrupted and diversified energy resources for ensuring the sustainable development has been the policies of the countries in general. The blood of industry is energy resources. The energy and its efficient use is one of the indispensable factors that influence the development in today’s world. Within that framework, the reaching energy and continuously ironing out this need is a matter of security rather than a necessity. Resources namely oil and natural gas come into forefront as the most demanded natural resources in the world. In a rapidly globalized world, this has brought about the linking of supplier countries with the demand centers via several transportation ways above all the pipelines.

In terms of dealing with the mounting energy demand around the world and assuring oil and natural gas, regions and countries that supply them, are on the transit route of these resources, or consume them in large quantities need diverse strategic plans. In today’s world, the strategic significance of Middle East and Central Asia in meeting the world’s hydrocarbon need, sets the issue of US policies in securing energy sources in the focal point of global and regional power quarreling. When looked at the struggles among states in today’s international arena, it is seen that most of them are basically the struggles toward sharing, controlling the transportation ways of, and trading energy.

One central policy in diversification and securement of energy supply for the United Statesis to obtain the hydrocarbon resources located in the Caspian region, and safeguard their transportation to the Western markets, by passing Russia and Islamic Republic of Iran. Within that milieu, the United States has a priority to extract and transport hydrocarbon resources located in Caspian Basin to Western markets, by bypassing Russia and Iran, as part of its policy of diversifying and securing global energy supplies. In other words, without ensuring the full control of energy resources, the US might not sustain its role as a world leader. Here, Washington works up for the prevention of inaugurating dominance in the region by Moscow through pipelines as well as the isolation of Tehran by prohibiting and blockading the pipeline projects that are likely to provide central political, economic, and strategic outcomes to this country.

Washington has encouraged the active participation of its companies in the projects of drilling and development of hydrocarbon resources possessed by these countries, and forming reliable transformation routes to carry these resources to international markets. The use of energy resources as a political pressure instrument by Russia in her foreign relations steer the biggest consumers like the European Union and Turkey, which are extremely dependent on abroad in terms of the hydrocarbon resources toward alternative hydrocarbon suppliers. In order to achieve these goals, White House gives special emphasis on developing relations with the transit countries with regard to the reliable transportation of oil and natural gas to the international markets.

The use of energy resources as a political pressure tool by Russia in her foreign relations steer the biggest consumers namely the European Union and Turkey which are extremely dependent on abroad in terms of the hydrocarbon resources toward alternative hydrocarbon suppliers.Russia’s approach of being monopoly on energy supply as well as controlling the world geopolitics has ensured Moscow’s re-empowerment. Russia’s monopolistic hegemonic influence worries about the United States and European Union with regard to energy security and increasing demands. Given the dependence of former Soviet Republics to Moscow on energy transfer, Kremlin is successful in holding the control of these countries. Russia chases after the increasing of quantity of energy resources that it buys from the regional countries as well. Moscow does not refuse increasing price policies of these states but it endeavors to overrule alternative pipelines by creating technical obstacles before these projects.

Rich hydrocarbon reserves are placed in Azerbaijan, Kazakhstan, Turkmenistan, and Uzbekistan. They are highly interdependent with regard to energy resources, transportation infrastructure, and markets. Hydrocarbon resources in the Central Asian region are placed far from established markets, and the countries’ lack of direct access to the hydrocarbon transit sea lanes collectively do involve them in competition and collaboration to get the oil and gas to market. But because the Caspian Sea region’s oil-producing countries are mostly land-locked, routes to the market invariably include shipment through third party countries. Given the high demands of energy resources in the world, they prefer to sell their resources abroad. The solution of transportation of Central Asia’s resources to world markets only passes from the increasing of transportation diversity and breaking the monopoly of Moscow. Indeed, in today’s world, the only way to reach from this closed region to the world markets now passes over Russia. 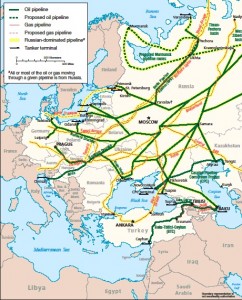 In that regard, the matchless geographic location of Turkey which is in between the energy producers and consumers is closely kept an eye on by the countries in Caucasia and Caspian region possessing rich hydrocarbon resources. Turkey is geographically located in close proximity to the regions where more than 73 % of world’s proven oil and 72 % of natural gas reserves exist. Other than this, Ankara has close historical, political, cultural and economic relations with the countries that enjoy these hydrocarbon resources. Ankara’s exclusive status is increasingly taken into consideration by Brussels which prioritizes energy supply security and also by Washington which attaches special importance to these regions within the context of her global strategy toward these regions.

With regard to this issue, Turkey plays a very active role in terms of the pipeline projects in East-West Energy Corridor and she is the country that implements several projects in this field. The pipeline projects that connect the Caucasia and Central Asia to Europe will be useful in terms of region’s integration with the West. Reliable and commercially viable pipelines will contribute to the bringing of stability and welfare to the region. Even though her energy resources are not adequate, Turkey gets the energy resources of the supplier countries and transports these resources to consumer countries via pipelines. Thanks to this condition, it turns into a significant terminal country. By going beyond a transit country, Turkey becomes one of the determinant actors that play a serious role in the traffic of energy resources.

Given these factors, the noteworthy pipeline projects which are operational or projected for the transportation of hydrocarbon resources in Caucasia and Central Asia into the international markets is an important issue for these countries. This increases the role of Turkey as an important transit country within the context of Eurasia’s energy axis and an energy hub in the region. By moving from this target, Turkey has been the leading country for the realization of East-West Energy Corridor which is envisaged as the direct transportation route of wide Caspian Sea Basin’s oil and natural gas resources to the Western markets. Turkey plays a very active role in implementing pipeline projects. The pipeline projects that connect Caucasia and Central Asia to Europe will be beneficial in the region’s integration with the West. Reliable and commercially viable pipelines will contribute to the stability and welfare of the region. These pipelines are also vital for the diversification of energy supply routes for the Western markets.

These unique geopolitical characteristics of Turkey turn it into a central country for the EU and countries in her near abroad within the energy context. Even though her energy resources are not adequate, Turkey’s position as a terminal country is significant. Turkey is not satisfied with just being a transit country, and attempts to become one of the determinant actors that play a serious role in the traffic of energy resources. 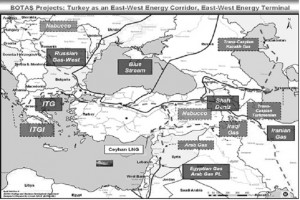 As a result, Brussels, Washington and Ankara have been in close collaboration in these projects -Multiple Pipelines Policy- since 1990s that aim to ensure the resource diversification. Within that milieu, it is possible to bring up the existence of several active and projected oil as well as natural gas pipelines. The operational Baku-Tblisi-Ceyhan Crude Oil Pipeline, Baku-Tblisi-Erzurum Natural Gas Pipeline, the projected Nabucco Natural Gas Pipeline and TANAP constitute some examples of these pipeline projects. Such kind of projects has a vital significance for both strategic reasons and the provision of the security of energy supplies.

It can be concluded that the competition on the transportation of Caucasia andCentral Asia’s huge hydrocarbon resources between regional powers and global powers will likely to continue in the future as long as these resources do exist.