US Vice President Mr. Joe Biden is making a historic visit to Cyprus during the settlement talks that restarted on this February. The visit is historic because Biden is the most senior US official to visit the island since the Vice President Lyndon Johnson’s visit in 1962.[1] Because of this historic meaning, this visit will naturally boost hopes for a breakthrough in ongoing reunification talks between Turkish and Greek Cypriots. Biden’s visit also shows Washington’s growing interest and engagement in Cyprus Dispute, though the real motivation might be derived primarily from American companies drilling in the East Mediterranean rather than a fair peace between two communities.

Mr. Biden met with both President Nicos Anastasiades and Turkish Cypriot President Derviş Eroğlu today under equal protocol rules although Turkish press claimed that Greek Cypriots openly pressed Biden not to give a picture that could place the Turkish Cypriot leader in an equal position with Anastasiades.[2] Biden, together with US ambassador to Cyprus John M. Koenig, also met with Archbishop Chrysostomos and discussed the Cyprus Dispute.[3] After its meeting with Cypriot President Nicos Anastasiades, Biden made a speech and said that “He waited 40 years to come to the island and was not disappointed”.[4] He continued; “It is the birthplace of Aphrodite, the crossroads of civilization, and a genuine strategic partner. The best days were ahead for both countries”.[5] Biden added that “his country is ready to provide assistance to Cyprus to achieve the goal of reunification”.[6] 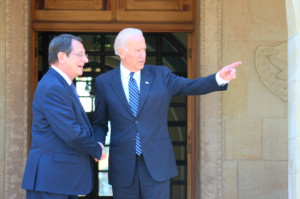 The President of Turkish Republic of Northern Cyprus Dr. Derviş Eroğlu on the other hand, after his meeting with Joe Biden made a press declaration and said that “the meeting was positive and as a superpower and one of the five permanent members of the UN Security Council, US interest in the Cyprus Dispute is advantageous for Turkish Cypriots who have always supported peace talks”.[7] Eroğlu added that they give their full support to peace process, but “both sides should not be maximalist for making a fair peace by getting away from their obsessions and by trying to make empathy with each other”.[8] Eroğlu also thanked US President Barack Obama and said that “Mr. Biden did not come with a specific settlement plan and said that it will be Turkish and Greek Cypriots who will find a solution to ongoing problem”.[9] Mr. Eroğlu also expressed his wish to see Mr. Biden again on the island after the settlement.[10] 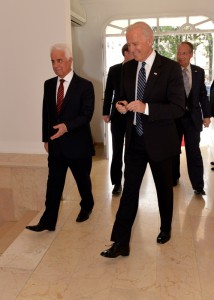 The visit may contribute to the settlement process since it shows American support for peace on the island but there are still serious barriers for a comprehensive plan. The first problem is for sure the lack of willingness for peace among Greek Cypriots who are comfortable enough with the status quo as citizens of a country being a member of European Union since 2004. Although Greek Cypriots suffer from the economic crisis for some years, -against a powerful country like Turkey- they may not prefer to lose a pretext that they will continue to exploit. By doing this, Greek Cypriots can also continue to take the support of anti-Turkey groups within the EU since Turkish accession to EU might be accelerated and can turn into a real possibility after a comprehensive settlement in the island.

Secondly, although Turkey openly supports settlement process in the island[11], the removal of Turkish soldiers from the island will mean a great geopolitical loss for the country, an issue that Greek Cypriots have been insisting since the early days of the peace talks. Remembering Russia’s insistence for Al Assad government in Syria, Turkey might not be that willingly to lose its only overseas military basis if the peace talks will include such matter. In this case, it is also highly questionable whether United Kingdom would give up from its bases on the island. Thus, the peace process should not include the removal of soldiers who guarantee peace and stability in the island.

Thirdly, a limited agreement focusing on the energy deal, the opening of Varosha (Maraş) region and removal of economic sanctions on TRNC could work better since making peace requires the integration of two communities more than just a deal. European Union example shows that integration could be successful with an economic motivation like European Coal & Steel Community (ECSC), but functionalist theory -as David Mitrany suggests- dictates first the economic integration and then the social and political integration. Without economic integration, looking for a comprehensive settlement might not be that attractive for both sides. Thus, both sides should first focus on energy deal as well as the opening of Varosha region rather than a comprehensive settlement that may not be possible.

In any case, this process should have some productive results in order not to disappoint Cypriots again.

[11] For instance see; “Turkey believes Biden’s visit to Cyprus will lead to momentum in talks”, Hürriyet Daily News, Date of Accession: 22.05.2014 from http://www.hurriyetdailynews.com/turkey-believes-bidens-visit-to-cyprus-will-lead-to-momentum-in-talks-.aspx?pageID=238&nID=66614&NewsCatID=510.