The first Turkish ‘guest workers’ arrived in Belgium fifty years ago, following a bilateral recruitment agreement signed between Turkey and Belgium. Turkish migrant workers were supposed to stay in the country for a short period of time to compensate for deficits in local labour following the aftermath of World War II, but many of them stayed. Second and third generation descendants of these Turkish migrant workers have settled in Belgium over time.

Belgium has a population of about 11 million people and immigrants comprise more than 10 % of the Belgian population. Nowadays the population of Belgian-Turks is around 200.000 and it constitutes one of the largest immigrant communities in Belgium.

However, immigrant integration in Belgium has been particularly challenging, mostly due to the country’s restrictive immigration policies and the lack of integration strategies. Throughout the 1950s Belgium experienced large migration waves. By the end of the 1960s, the Belgian government adopted a more restrictive labour migration policy in light of the economic recession and the rising unemployment. Family reunification and asylum became the most common ways to immigrate to Belgium.

It wasn’t until the 1980s that new policies to encourage immigrants to settle and integrate in the country were developed. In 1980, the government established a law, which is still in force, on entrance, residence, settlement and return of foreigners. Some years later, the then-Minister for Justice, Jean Gol, passed a law that brought equality for migrant men and women before the law, while integrating immigrants by naturalization after proving their attachment to Belgium. In 1991 the Gol Law was amended in order to relieve the requirements of naturalization and in the year 2000 a new law eased the naturalization process even further.  According to the new law, candidates for naturalization no longer had to prove their allegiance to Belgium.

In 1984, the Belgian Nationality Code was revised to introduce the principle of jus solis[1] and simplified the process for naturalization. After seven years of continuous permanent residence in Belgium, foreigners could become Belgian without having to demonstrate their desire to integrate. In the year 2000, the residence requirement for naturalization was shortened to three years.

However, new rules entered into force in 2013, which tightened the requirements for naturalisation. Foreigners who want to become Belgians must be now in possession of an unlimited right to stay in Belgium, they must know a national language and be integrated. Likewise, stricter requirements for family reunification were also introduced in 2011, according to which the sponsor must prove that they earn a minimum income equivalent to 120 % of the minimum social income.

On the other hand, Belgium’s cultural and linguistic distinctiveness has led to a lack of homogeneous national culture. After cultural autonomy was accorded to the Flemish and Walloon regions, responsibility for the immigrants’ integration was transferred to the regions and communities.

The French and Flemish communities have taken different approaches when it comes to immigration. While the integration policy in Wallonia has been assimilationist, expecting immigrants to adapt and conform to the Belgian-Francophone culture, the Flemish government has generally supported the inclusion and integration of ethnic minorities’ communities.

The largest Turkish communities can be found in Flanders, particularly in Antwerp and Ghent. The rest are equally spread over Wallonia and Brussels –where they have settled in almost exclusively Turkish neighbourhoods, as it is the case of Schaeerbek, which has an estimated population of 25.000 Turks. Integration has proven to be more effective in Flanders since there is a greater recognition of the migrants’ otherness.

On 25 May 2014, Belgium will simultaneously hold European, federal, regional and community elections. Tensions between the two main linguistic language communities –French and Flemish- have occasionally brought down some governments, creating frequent political instability. In the 2010 federal elections, the New Flemish Alliance (N-VA) emerged as the largest Belgian party with 27 seats, only one seat ahead of di Rupo’s Socialist Party. Socialist Prime Minister Elio di Rupo was appointed in late 2011 to lead a six-party coalition after 18 months of negotiations. The N-VA is likely to receive similar levels of support this year.

Di Rupo is the first francophone to hold the office since Paul Vanden Boeynants did in 1979, as well as the country’s first socialist Prime Minister since Edmond Leburton back in 1974. He also happens to be first Belgian prime Minister of non-Belgian descent.

The influence of the Turkish vote on Belgian politics

One cannot help but notice the election campaign posters in Brussels these days as well as the number of Turkish descent candidates running for Belgium’s upcoming elections. Almost all Belgian political parties have ethnic Turkish candidates in their party lists.[2]

Currently, there are two members of Turkish descent at the Belgian Federal Parliament, Meyrem Almaci (Groen) and Özlem Özen (PS). Emir Kir (PS), Emin Özkara (PS) and Manihur Özdemir (CDH) are members of the Brussels Parliament and Fatma Pehlivan (SP.A), Güler Turan (SP.A) and Veli Yüksel (CD&V) sit in the Flemish Parliament. However, there is still no Turkish origin member in the Walloon regional Parliament.

Two Belgian-Turks politicians have become particularly well known in the Belgian political scene. In 2009, Manihur Özdemir became not only the youngest member of the Brussels regional Parliament but also the first woman to wear a headscarf in the Parliament of a European country, rekindling controversy over the use of religious symbols in public spaces. Manihur is a CDH candidate again for the May 25 Brussels Capital region elections.

Emir Kir is yet another visible French speaking Turkish descent politician in the Brussels scene. Kir joined the Socialist Party (SP) in 1995 and ran for election for the first time during the municipal elections of October 2000 in Saint-Josse. In July 2004, he became Secretary of State for Public Hygiene, Monuments and Sites of the Region of Brussels-Capital, a post he held until 2012. In October 2012, Emir Kir became the first Turkish origin mayor in the French speaking part of the country, after winning the mayor’s office of Saint-Josse, a municipality where almost 50 % of its residents are from a non-European descent.

The use of Turkish as a second language by some Belgian parties in their election campaigns has reopened the ethical debate over whether or not to address the migrant communities in their mother tongues. Alain Destexhe, a liberal MP from the Reformist Movement (MR), has recently protested against the distribution of an election leaflet in Turkish by the CHD in the Brussels’ communes of Saint-Josse and Schaerbeek. Such behaviour is unacceptable and testifies the failure of integration, Destexhe wrote in his blog. The Reformist Movement Party has long denounced that men and women shouldn’t be chosen solely because of their ethnic or religious affiliation. 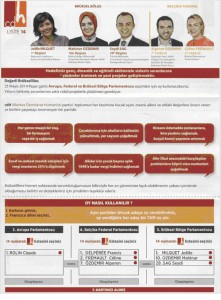 The CDH reacted swiftly in a statement noting that the leaflet was originally written in French and translated into Turkish in the overleaf of the document. In return, CDH provided evidence of leaflets also written in Turkish being distributed by Turkish origin candidates of the MR. 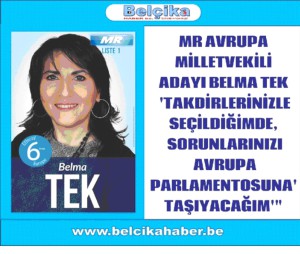 For its part, the Open Flemish Liberals and Democrats Party (Open VLD) held a press conference to present its electoral program to the Turkish press in the presence of 4 out of its 9 candidates of Turkish origin. During the press conference, a video spot –dubbed in Turkish- presenting Open VLD’s 5-5-5-growth plan was shown to the journalists. 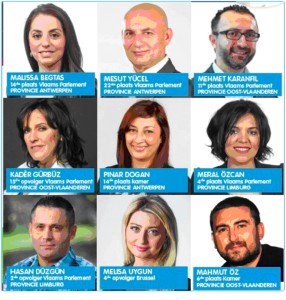 However, this is not the first time that Turkish is used during an election campaign in Belgium. In 2010, three candidates of Turkish origin (Sait Köse, Emir Kir and Yalçın Bulduk) from the francophone parties MR, PS and CDH respectively, used political propaganda almost exclusively addressed in Turkish.

A CDH bilingual leaflet in French and Turkish under the slogan “Birlikten güç doğar” (l’Union fait la force) was surrounded by controversy. While in the French version the CDH called for a pact of mutual respect between all Belgians and citizens of different origins, the Turkish version asked Turkish voters to support Manihur Özdemir to represent their voice in the Brussels Parliament.

Turkey’s sensitive political issues have proved to be delicate in Belgium too. Following an unofficial delegation to report on the situation of press freedom in Turkey, three Belgian MPs –Jean-Claude Defossé (Ecolo), Fatoumata Sidibé (FDF) and André Bus (CDH senator)-, put forward a resolution calling Turkey to respect those rights. The resolution was expected to be examined on 31 March. However, when it came time to vote, PS, CDH and MR’s MPs left the room. Since there were not enough members present to constitute a quorum, the motion for a resolution slipped into oblivion.

The empty-chair strategy has most likely been used to avoid ruling on a text that could displease their Turkish electorate. The Socialists previously refused toco-sign the proposal arguing that the Brussels parliament was not the right place to adopt such a proposal.

On the other hand, some Turkish origin politicians seem to have been leading a double life in politics. This is the case of Veyis Top, candidate of the Reform Movement Party, and Erdinç Utku, candidate of the Flemish Socialist Party, who have recently founded the association “Belgian Union Solidarity CHP – CHP Belçika Birliği“. It shouldn’t be forgotten though that CHP has a EU representation office in Brussels since 2008 and AK Party is planning to open one very soon.

It is also worth mentioning the case of Cemal Çavdarlı, a Turkish-Belgian politician formerly active in the SP.A who decided to join the AKP as a candidate in the parliamentary elections of 2011 in the province of Eskişehir, even though AKP’s ideology is diametrically opposed to the one of SP.A.

The upcoming August presidential elections in Turkey will certainly resonate amongst the Turkish community in Belgium. Not only will it be the first time that the President of the Republic of Turkey will be elected by universal suffrage, but also the first time that Turkish citizens living abroad will have the right to vote from their country of residence. In Brussels, 20 to 60 poll-voting stations will be set to vote for Turkey’s presidential elections in July 2014.

50 years of Turkish migration in Belgium

2014 has largely been devoted to commemorate the 50th anniversary of Turkish immigration to Belgium. As a symbolic gesture, the city of Brussels has announced that this year’s edition of the famous floral carpet on the Grand Place will show a traditional Turkish and Ottoman carpet to mark this occasion.

After 50 years, Turkish migrants and their descendants are no longer “guest workers” but “New Belgians”, who have climbed the social ladder becoming increasingly interested in the Belgian culture while maintaining their traditional values. However, for Prime Minister Erdoğan Turkish migrants to Europe are “Turkish citizens living abroad” and has even urged them not to assimilate into their host societies. 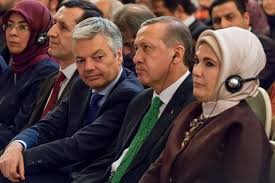 The Federation of Active Associations in Belgium (Fedactio), one of the largest NGOs representing the Turkish community in Belgium, has been one of the most active organisations in commemorating this occasion. Fedactio has organised over 50 social, sporting and cultural activities in Brussels, Flanders and Wallonia since the launch of the project “50 years in Belgium, a future to build together” in 2012.

Curiously enough, during one of Mevlüt Çavuşoğlu’s, Turkish Minister for EU affairs, lasts visits to Brussels, he excluded Fedactio from an NGO meeting, as Today’s Zaman journalist Abdullah Bozkurt reported in a tweet. Fedactio believed links to the Gülen’s movement might have been the reason behind this decision.

Next year, Turkey will attend the 25th Europalia International Arts Festival as guest country. Europalia is a major international arts festival held every two years to celebrate one invited country’s cultural heritage. From the beginning of October 2015 to January 2016, Turkey will be able to bring its cultural richness to Europe in every field of artistic creativity.

This will undoubtedly be a unique opportunity to promote Turkey’s cultural richness and diversity but it should also be serving as an occasion to strengthen the relationships that Belgian-Turks have with Turkey and Europe.