No surprise took place in Turkish Presidential elections… Ruling Justice and Development Party’s candidate Prime Minister Recep Tayyip Erdoğan has become the 12th President of the Republic in the first round of elections.

Before the elections, according to latest polls Erdoğan was expected to get around 57 % of the votes, but he got only 52 %, which could be considered only as a pyrrhic victory for him.[1] Ekmeleddin İhsanoğlu, the candidate supported by the pro-European social democratic Republican People’s Party (RPP) and secular Turkish nationalist Nationalist Action Party (NAP) as well 10 other small parties, got 39 % of the total votes. Results show that it would not be easy for President Erdoğan to transform the country into a Presidential or semi-Presidential system. In addition, there might be serious problems within the JDP without Erdoğan’s charismatic and authoritarian leadership as he will step up into Çankaya Palace. 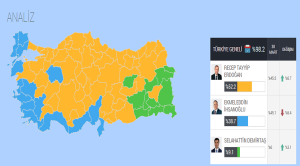 Voter turnout in the elections was around 74 %, a low average for Turkey, a country getting used to an average voter turnout around 85 to 90 %. This is the result of the timing of the Presidential elections since hundred thousands of Turkish people are still enjoying their summer holidays. Pro-Kurdish Selahattin Demirtaş got 9 %, a much higher vote compared to his party’s 6 % average. However, results indicate that pro-Kurdish parties still could not pass 10 % threshold and it would be better for them take part into next general elections by means of independent candidates.

2014 Presidential elections in Turkey confirmed that Erdoğan is not strong as he seems. It must not be forgotten that Erdoğan conducted his political campaign with the help of all state institutions and there was not an equal race between the government and the opposition. Moreover, Erdoğan now represents barely the half of the population in a strongly polarized country. Thus, opposition parties should continue to collaborate and improve their political openings towards different segments of the country in order to beat JDP without Erdoğan in the 2015 general elections.

[1] A Pyrrhic victory is a victory with such a devastating cost that it is tantamount to defeat. Someone who wins a Pyrrhic victory has been victorious in some way; however, the heavy toll negates any sense of achievement or profit (another term for this would be “hollow victory”).