After the decision of President of the Cyprus Republic, Mr. Nicos Anastasiades to end the negotiation talks for a possible settlement, now the current agenda in the island is concentrated mostly on the Presidential elections on the north side that will take place in April 2015. Candidates for the election are already set.

Although New York Times editor-in-chief Mr. Thomas Friedman forgot to mention[1], Turkish Republic of Northern Cyprus (TRNC), a country that is recognized only by Turkish Republic, is without any doubt most democratic and secular-oriented country in the Muslim world. Declared in 1983, 9 years after the Turkish military intervention into the island against a fascist military coup made by Greek Cypriots aiming to annex the island to Greece, the country is still recognized only by Turkey. In 2004, Turkish Cypriots voted in favour (65 %) of Annan Plan in order to realize the settlement and unification in the island, but Greek Cypriots strongly rejected the referendum and showed that they are happy with the status quo. Although many promises and guarantees were given by the EU officials before the referendum, as a result Greek Cypriots were awarded with membership and Turkish Cypriots were deceived once again. Although there is still an economic crisis in the south, the latest decision of Mr. Anastasiades once again showed that the barrier for the peace in the island is caused by Greek Cypriots who did not have a strong will for solution. However, the recent geopolitical crisis between EU and Russian Federation creates a favorable position for the settlement which could facilitate the safe and cheaper transportation of East Mediterranean hydrocarbon resources.

The favorite candidate before the election is Mr. Derviş Eroğlu[2]. Born in 1938 in Famagusta, Mr. Eroğlu is a doctor and an experienced politician at the same time. He was the Prime Minister of TRNC between 1985-1994 and 1996-2004 as the leader of center-right National Unity Party (Ulusal Birlik Partisi). After Rauf Denktaş and Mehmet Ali Talat, Mr. Eroğlu is the third (current) President of the Republic since 2010. Nowadays, Eroğlu acts as an independent candidate but he has the strong support of his party National Unity and also Serdar Denktaş’s Democratic Party (Demokrat Parti), other major party in the center-right political spectrum. Eroğlu might win the contest in the first or second round although he is known as a status quo defender not very willingly for a settlement in the island. 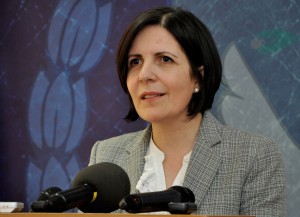 Born in 1960 in Nicosia, Mrs. Sibel Siber[3] is also a doctor and politician at the same time. She is a member of the Parliament since 2009 from social democratic Republican Turkish Party (Cumhuriyetçi Türk Partisi). Before the general elections in 2013, she was for two months the acting Prime Minister of the country. After the elections, she became the Speaker of the Parliament. She represents a new and not eroded face in favor of peace and settlement in the island. That is why; she could easily mobilize young voters who want to have a vision for their future. Moreover, if Mrs. Siber wins the election, she will become the first female President not only on the north, but in the whole island.[4]

Born in 1973, Mr. Kudret Özersay[5] is the fresh blood of Turkish Cypriot politics. Scholar of law, Mr. Özersay was the advisor of President Eroğlu between 2010-2012 and the chief negotiator of TRNC during this year. He is also the leader of civil society initiative called Toparlanıyoruz (We are Recovering) which demands clean and transparent politics in the country. Unlike Mr. Eroğlu and Mrs. Siber, Mr. Özersay is not accepted as a favorite candidate for the moment, but he can attract the attention of the voters in the following days since he is young and a very good speaker. He also has the advantage of taking votes from both right and left wing electors since he situates himself at the center.

Born in 1947 in Limassol, Mr. Mustafa Akıncı[6] is an experienced politician coming from extreme left tradition. Architect as a professional, he was the legendary municipal leader of Nicosia for three terms in the 1970s and 1980s. He was also a member of the Parliament between 2005 and 2009 from Peace and Democracy Movement (Barış ve Demokrasi Hareketi). Although he does not have too much chance, Mr. Akıncı can take the attraction of the leftist voters by reducing Sibel Siber’s votes.

Finally, it should be stated that there is still a very long time (4 months) before the election and everything can change during this time since TRNC is a very small country open to foreign influence. However, we can still say that the competition will be probably between Derviş Eroğlu and Sibel Siber and Mr. Eroğlu still has the lead.