Energy security has been a significant issue in the EU since the beginning of 21st century. Russia plays a major role in European energy security as the main supplier of oil and gas to the EU. The EU imports approximately 65 % of its energy from Russia, which constitutes the largest market for Russian natural oil and gas.[1] However, the European Union aims to decrease its dependency on Russian oil and gas, because the current situation provides a comfortable ground to Russia to be able to affect EU’s foreign policy decisions.

Previously, Soviet energy supplies were regarded as a reliable alternative to unstable energy supplies from the Middle East.[2] Yet by the mid-2000s, dependence on Russian energy supplies has come to be seen as a threat to European energy security due to the transit disputes and interruptions of Russian oil.[3] After the EU expansion in 2004, the role of Russia in Europe’s energy security became more considerable. This was caused mostly by the states that joined into the EU in 2004 and which are more dependent on Russian energy supply than the previous EU members. These countries include Czech Republic, Estonia, Latvia, Lithuania, Poland, Slovakia and Slovenia. This enhanced dependency has affected EU energy policy, while the dangers of ever-dependency were shown in transit disputes and interruptions in the delivery of Russian oil supplies in 2007 and in Russian gas supplies in 2006, 2009 and 2010 to their European consumers.

This paper will analyze the rate of dependency of EU on Russia with a special focus on the past years’ relations and its effects on EU’s foreign policy. There will be affords to find out the alternative variants for EU’s energy consumption. The dependent variable will be the dependency of EU to Russia, while the gas-oil resources of Russia will be the independent variable. This is one of the most important issues in the world as it affects greatly the current international relations of the world. However, the energy dependency of EU on Russia also directs EU countries to find alternative ways to solve their energy security problem by getting into closer relationships with some other gas exporting and transit countries such as Azerbaijan.

The EU members are the largest energy importers since they are importing 55 % of their energy supply, 84 % of their oil and 64 % of their natural gas.[4] The natural gas is the main element in EU’s energy supply strategy and it is expected to increase due to the policy of reducing carbon dioxide and greenhouse gas emission in Europe. Although Norway is in the first place for its amount of gas supply to EU[5], Russia also remains as a main gas supplier to Europe. The extensive network of infrastructure of transporting Russian natural gas to the long distances of Europe shows that natural gas is going to play an important role in EU- Russia relations. As it is shown in the figure 1, Russia is currently supplying 34 % of natural gas to EU which stands in the second place after Norway (35%). Although there are some other countries supplying gas to EU, the amount of their supply is highly less than the gas of Norway and Russia. 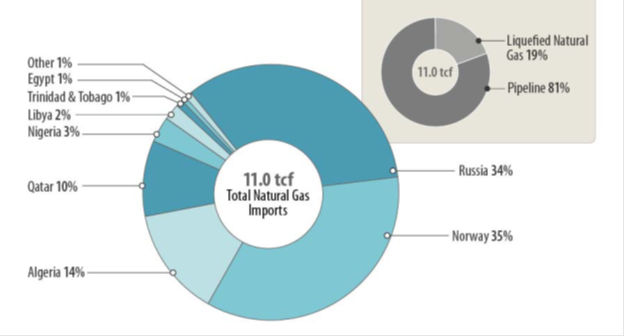 In figure 1, there is a list of EU members showing the EU energy consumption of Russian natural gas. As it is shown, although the European countries such as United Kingdom, Spain, Portugal, Malta and Cyprus are not importing any Russian natural gas, members like Bulgaria, Estonia, Finland, Latvia and Lithuania are consuming all their gas demand from Russia. In addition, countries such as Austria, Czech Republic, Greece, Poland, Slovakia and Slovenia are importing more than 50 % of their natural gas import from Russia. As noted, in Europe market, Russia is the primary supplier of natural gas and about of its half of exports went to EU over the past years. 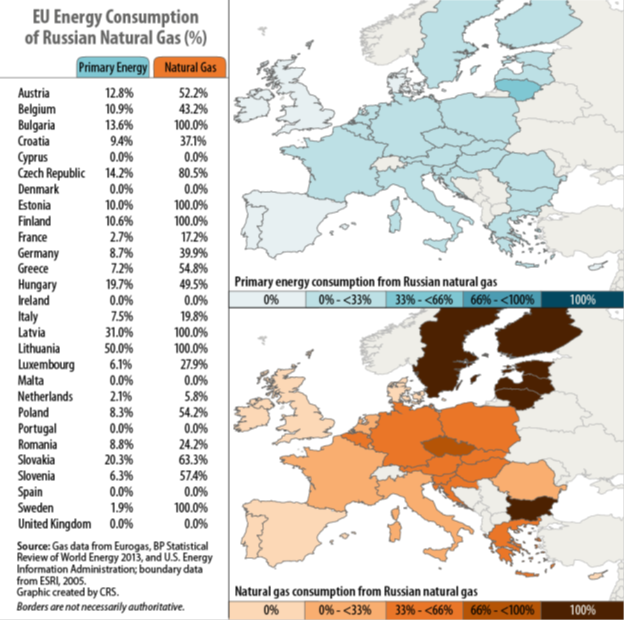 Implications of EU’s energy dependency for the foreign policy

As it is shown above, there is an energy dependency of EU towards Russia. This dependency also affects EU’s foreign policy and directs EU towards weakness against Russia. EU member states are trying to solve their own energy problems by themselves and this ignores Russia’s possible use of gas to suppress democratic movements in transit countries (Ukraine). It could be any other way, but we have seen EU coordination on economic policy, of which can certainly be defined as a matter of “national security”. Energy clearly is an economic component and so, it is not unreasonable to think that the EU could successfully coordinate its energy policy with regard to Russia.

The Crimea crisis is a significant example of how EU’s foreign policy is formulated by the effect of Russian energy power. It has exposed the EU’s weakness in response to the crisis by highlighting the inability of its member states to adopt a coherent and effective response to an external crisis. This is due to the structure of the European Union, where there is conflicting interests between member states. In fact, it makes EU’s own security goals ineffective. As the European Security Strategy (ESS) of 2003 states, other states that “persistently violate international norms” should refrain from doing so and rejoin the international community, and “those who are unwilling to do so, should understand that there is a price to be paid, including in their relationship with the European Union” (ESS, 2003: 10). It was expected to act a forceful response towards Russia, who violated the international norm of respecting the sovereignty of Ukraine. But due to the roles of the certain members such as Germany who are in strong economic relations with Russia, the crisis pushes the EU to act as much as possible less rigid towards Russia. Germany tried to weaken the threat of sanctions as the biggest gas buyer from Russia. There are 6.000 German firms in Russia and 300.000 people are employed in Germany thanks to trade with Russia.[6] According to Reuters, this year German growth could be reduced by up to 0.9 % in the case of tougher sanctions against Russia.[7] But there are other groups of members (such as United Kingdom and France), which are not so dependent on Russia since their economies afford to strengthen the threats of the sanctions.[8] As a result, difference of economic interests of the members weakens the EU and prevents it to speak with one voice against Russia.

According to European Commission President Jose Manuel Barroso, EU members are struggling to come to an agreement about the Ukraine crisis. He said that although European members had decided to support Ukraine and to show that there are some consequences of Russian offensive actions, he said that speaking in one voice is “still in progress” by different interests of EU member states.[9] The expectations of Paris-based International Energy Agency (IEA) show that, in 2035 the share of imports in EU gas consumption will climb to 85 % if there is no change in EU energy policy. The Crimea crisis made EU suddenly aware of how it is depended on Russia in terms of its gas supplies and led EU members to make a new look to their entire energy policy.

In conclusion, Russia is currently the main potential gas supplier to most of the EU member states and EU has not another strong supplier who can compete with Russia for the moment. This makes them to be dependent on Russia and it has some consequences in relation to their foreign policy. The current Crimea issue has again proved that as long as EU needs Russian energy, it has to take into account that dependency in his common foreign policy.