Summary: Hong Kong Special Administrative Region of the People’s Republic of China is a region on the southern coast of China geographically enclosed by the Pearl River Delta and South China Sea. It is associated with its expansive skyline and deep natural harbour, and with a land mass of 1.104 km2 and a population of over 7 million people. On the other hand, it has an important economic aspect, too. It is not easy to be a part of the Four Asian Tigers, but Hong Kong is a part. Thus, in this research paper, different aspects of Hong Kong are examined.

1. A Short History of Hong Kong 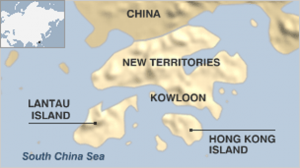 Situated on the southeast cost of China, Hong Kong’s strategic location on the Pearl River Delta and South China Sea has made it one of the world’s thriving and cosmopolitan cities. Prior to the arrival of the British colonizers to China, Hong Kong was a small fishing community and haven for travellers and pirates in the South China Sea. Because of the Opium Wars with China in the 19th century, Britain used the territory as a naval base.  Following the end of the First Opium War, the Treaty of Nanking ceded the territory to the British in perpetuity.[1]

During the colonization process, Hong Kong served as a refuge for exiles from China following the establishment of the Chinese Republic in 1912.[2] Especially after Japan’s occupation of Manchuria in 1932 and the beginning of Sino-Japanese War in 1938, China turned to Britain for supplies. As a result of this relationship, relations between Britain, Hong Kong and China became warmer. Also, as the colonization process continued, the WW II took place. The war disrupted the social and economic life of Hong Kong. For example, on December 8 1941, Japanese aircraft bombed Kowloon and Japanese troops forced the British to surrender Hong Kong on Christmas Day in 1941. Following Japan’s surrender on August 14, 1945, Britain reclaimed the territory. Hong Kong became a major trading center again.

When the Civil War was won by the communists in China, hundreds thousands of people fled to Hong Kong. Later, during the 1980s, Hong Kong started to work with China on a series of joint projects that brought the two countries closer.[3] However, the people of Hong Kong were ignored by the Sino-British Joint Declaration of 1984, which negotiated the return of the land from one power to another; at no point it was seriously suggested that this economic miracle with more than six million inhabitants could declare independence.[4] In the following process, in 1984, Britain and China reached an agreement that Hong Kong would be given back to Chinese authorities in 1997. Under the principle of “One Country, Two Systems”, Hong Kong became a Special Administrative Region of the People’s Republic of China on 1 July 1997.[5] Since that time, the people of Hong Kong have been ruled by the Basic Law. However, in recent years, there have been pro-democracy movements in Hong Kong because of the Chinese pressure. Since China does not know that pressure is not always a solution, on August of 2014 it declared that only candidates approved by Beijing will be allowed to run.[6] Today, the people of Hong Kong are concentrating on the election that will take place in 2017. Until this year, it seems that China will face more and more difficult days.

The official language of Hong Kong is Cantonese and English. 89.5% of the population speaks Cantonese, 3.5% speaks English, 1.4% speaks Mandarin, 4% speaks other Chinese dialects, and 1.6% speaks other languages.[11]

Because Hong Kong is a part of China, most of the population is based on Chinese migrants. According the data of Index Mundi, the main ethnic groups and their percentages within the society are: 93.1% of Chinese, 1.9% of Indonesian, 1.9% of Filipino, 3% of others.[12]

On the other hand, despite having a multi-cultural society, Hong Kong enjoys a high degree of religious freedom, guaranteed by the Basic Law. The main religious groups and their percentages within the society are as following:[13]

Hong Kong is an autonomous Special Administrative Region of the People’s Republic of China. Following the British rule from 1842 to 1997, China assumed sovereignty under the “One country, Two systems” principle. Excepting foreign affairs and national defence, it grants broad autonomy to the territory and allows it to retain its capitalist system as well as its way of living for a period of 50 years, until 2047.[14] The Hong Kong Special Administrative Region’s constitutional document, the Basic Law, ensures that the current political situation will remain in effect for 50 years. According to the Basic Law, the political structure is based on the Legislative Council as the law-making body, the Chief Executive as the executive body, and the Court of Final Appeal as the judicial body.

The law-making body of Hong Kong Special Administrative Region is the Legislative Council. It comprises 70 members; with 35 elected directly by geographical constituencies and 35 elected by functional, occupation-based constituencies. Apart from its law-making function, the Legislative Council debates issues of public interest, examines and approves budgets, receives and debates the Chief Executive’s policy addresses, and endorses the appointment and removal of the judges of the Court of Final Appeal and the Chief Judge of the High Court.[15]

The Chief Executive is the Head of the Hong Kong Special Administrative Region. He is elected by a broadly representative Election Committee in accordance with the Basic Law, and is appointed by the Central People’s Government.[16] The Chief Executive is responsible for implementing the Basic Law, signing bills and budgets, promulgating laws, making decisions on government policies and issuing Executive Orders.[17]

Finally, the rights and freedoms of people in Hong Kong are based on the impartial rule of law and independent judiciary. The Court of Final Appeal is the highest judicial authority which is independent from the legislative and executive branches of government.

Hong Kong has a fast growing economy. The system is characterized by free trade, low taxation and minimum government intervention. According to the Report of Heritage[20], Hong Kong’s economic freedom score in 2014 is 90.1, making it the top-rated economy in the Index for the 20th consecutive year since the world average score is 60. Its overall score is slightly better than 2013 due to improvements in government size and regulatory efficiency that offset a decline in freedom from corruption. Hong Kong is ranked 1st out of 42 countries in the Asia-Pacific region and 1st in the world.

According to the data of World Bank, Gross Domestic Product (GDP) of Hong Kong in 2013 was over $270 billion.[21] As can be seen from the Table 2, GDP and GDP per capita have been increasing as well as the real GDP. Furthermore, the most visible success of Hong Kong is that while the economy is expanding, the inflation rate has been decreasing, which is a very good trend for the economy. Also, the unemployment rate is low for years, about 3.3%.

Hong Kong has an important trade partnership with the European Union (EU). As can be seen from the tables below, Hong Kong has deficits on its trade in goods. Those deficits have been growing. About services, although it depends on from time to time, it has deficits on its trade in services too. In case of investments, the FDIs of Hong Kong in the EU in 2012 were €50.2 billion, while the FDIs of the EU were €132.9 billion.

5. Asian Tigers, HPAEs, and the Miracle of East Asia

After the WWII, a group of smart South Asian economies started to show incredible economic developments. According to Page, the contrasting sources of growth of Hong Kong, Korea, and Singapore, all of which shared essentially the same rate of growth, are a good illustration of the varying roads to rapid growth among the HPAEs.[22] They industrialized themselves very rapidly as manufacturing centers driven by exports and later service sectors too. Hong Kong is one of those creative ones. Since 1980s, it has grown to become a leading centre for management, financial, IT, business consultation and professional services.

The Asian Tigers or Asian Dragons is a term used in reference to the highly free and developed economies of Hong Kong, Singapore, South Korea and Taiwan. These nations and areas were notable for maintaining exceptionally high growth rates (in excess of 7% a year) and rapid industrialization between the early 1960s and 1990s. By the 21st century, all four had developed into advanced and high-income economies, specializing in areas of competitive advantage. For example, Hong Kong and Singapore have become world-leading international financial centres, whereas South Korea and Taiwan are world leaders in manufacturing information technology. Their economic success stories have served as role models for many developing countries. From this point of view, an important question emerges: how could the East Asian countries achieve their success as showing a high performance? The answer of this question is related to the following main factors, which consist of the Getting the Basic Right:

Thus, it can be said that the miracle of East Asia is due to working hard and sleeping less.

Spread over less than 1.500 square km, Hong Kong has established itself as a business center for organizations looking to expand across its borders. Within close proximity of key Asian cities and home to an international airport boasting over 180 direct connections worldwide, the city state is a gateway to mainland China and a magnet for global business.[23]

One of the reasons why Hong Kong is still growing is based on the easiness of making business and applying a complete laissez faire economy.[24] For example, dealing with construction permits, getting electricity, registering property, getting credit, protecting investors, offering a low and simple tax regime, resolving insolvency, and such other issues along with an international, transparent and efficient regulatory environment do not take too much.[25] Profit tax is capped at 16.5%, salaries tax at 15% and there is no sales tax or VAT, nor withholding tax, capital gains tax or levies on dividends to worry about.[26] Thus, initiators bring their capital to Hong Kong. 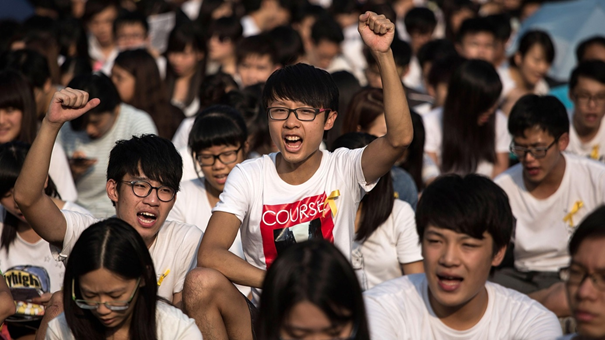 Hong Kong as a fast growing economy has some current challenges, but the most important one is happening nowadays. It is a socio-political challenge. Because of the Chinese pressure, the people of Hong Kong started to increase their voices. The people are unhappy that Beijing has rejected open nominations for candidates for the first-ever elections for Hong Kong’s leader, promised for 2017. China wants candidates to be chosen by a committee of mostly pro-Beijing tycoons, a requirement many residents see as a reversal of promises for more democracy in their semi-autonomous territory.[27] In this case, the people of Hong Kong are waiting the election that will take place in 2017.

Another current challenge is based on a socio-economic reason. Although there are many rich people in Hong Kong, the disparity between rich and poor is wide and it has become a political flashpoint.[28] To help people surviving on low incomes, the government provides public housing to about 50% of the population.[29]

8. The Diplomatic Foreign Relations between Turkey and Hong Kong

The diplomatic relations between Turkey and Hong Kong is not old because it is not easy to establish a diplomatic mission in a communist state. Despite this, the Consulate General of Turkey was first established in 1974 and reported to the Turkish Embassy in London. It was closed in 1979 and re-opened in 1991. Since the hand-over of Hong Kong to the People’s Republic of China in 1997, the Consulate General reports to the Turkish Embassy in Beijing.

In this research paper, socio-economic and socio-political aspects of Hong Kong were examined. Although it has to act with many defence and foreign problems, it tries to make itself better in every issue. Unlike China, the main land, Hong Kong is a very prosperous territory. To preserve this prosperity, Hong Kong has to preserve the free market policy.

[10] Other HPAEs are Indonesia, Japan, Malaysia, the Republic of Korea, Singapore, Taiwan and Thailand.