THE BREXIT VOTE: UNCERTAINTY OVER ALTERNATIVE?

Britain’s Prime Minister David Cameron has set one the most memorable campaign moods in British history, as the May election draws near experts are predicting a major change in the country political and economic grounds if Cameron manages to win another term. There are several differences between the Conservative and the Labour Party as highlighted in their campaign manifesto; however, the debate on whether United Kingdom should back out the European Union is becoming the centre of interest.

In his speech in January, David Cameron outlined his desire for the British people to hold a referendum stating that the people deserve to have their say on the issue of European Union membership. It is not a secret that United Kingdom has failed to agree on other member states in EU on most matters since it joined in 1973. Therefore, thoughts on its departure have always been on people’s minds.

Cameron desires on “Brexit” (Great Britain leaving the European Union) have been met with tough opposition from the Labour Party led by the party leader Ed Miliband. The Labour Party sees a move on “Brexit” vote as very costly because it will put Britain on economic uncertainty with many investors unwilling to commit their capital in a country which does not have a guaranteed tomorrow. Cameron, however, pledges to hold negotiations talk with EU on the terms that define the British membership in the Union. While other members’ countries notably France and Germany do not support such a move by British citizens as they contemplate on favourable terms in the EU which will promote more British supremacy in the continent.

Britain joined the then European Economic Community in 1973. At that time all major parties in the country unanimously supported this decision. Before that the country was a member of European Free Trade Area, an organization which now has four members’ states (Iceland, Liechtenstein, Norway, Switzerland). A severe loss of confidence by Britain as a country made this move necessary, having lost most of its colonies by this time; the country had no clear plan on how to get out of its the economic crisis. On the other hand, the six members in European Union then were making great strides both economically and politically following the chaos of WW2. In 1975, the United Kingdom held its first joint referendum to decide on whether the country should continue as a member of EEC. The leader of Conservative Party then, Margaret Thatcher successful campaigned for a continued membership in EEC.

Margaret Thatcher was serving as the Prime Minister of UK between 1979-1990, a period where the issue of European Union membership took centre stage. It is important to note that despite being a pro-EU in the beginning, Margaret Thatcher later become a leading critic of the Union. Margaret Thatcher was never against EU membership as many tend to believe, but she had an issue over the Union dominance when it came to member’s states sovereignty. Indeed, she campaigned against some of EU plans most notably the rebate in 1984 to secure ‘money back’. Quite interestingly, most of her laid out policy form the core principles governing the EU up to date. Lack of support from other members’ countries on key reforms is what led to strained relationship between UK and other EU members during her time in power.

The same case that is threatening to erupt if Cameron plans to negotiate for better terms of membership does go through. One needs not to go far to see that UK always prefers to stand aside when it comes to EU matters. For instance, the country refused to support the agreement on Shengen area which is supported by the majority of European Union members, on top of that UK has opted to hold on to its Sterling Pound currency despite there being a common Euro currency for all the EU members. These examples show that as much as UK is an EU member, its commitment has been far from convincing.

The graphic below shows the leaders of British political parties and their key promises for upcoming general elections in UK. 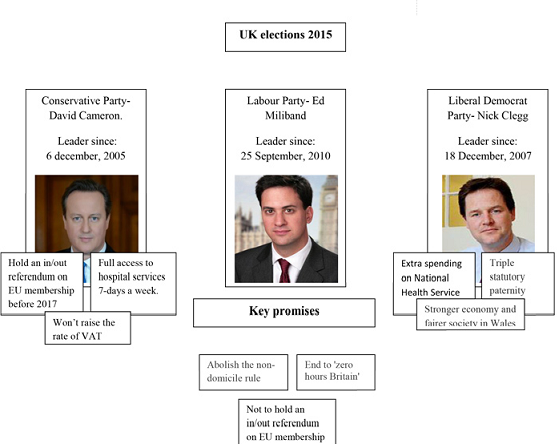 While the battle for this year election is clearly drawn, it’s important to consider the pro and cons of Britain leaving the EU. One of the main advantages that would come from “Brexit”, is the country’s significant saving from not contributing to the EU annual budget. Considering the amount UK would save is roughly 0.24% of GDP, it would be money well spent in major developments. Flexible trade laws is another benefit of “Brexit” as currently UK has to abide by the EU regulations which end up imposing unnecessary costs on the country firms.

Most important however, is having back its own identity which UK has lost over the years. The British unique identity is what made it stand out as a powerful nation prior to its EU membership. Cameron points out that EU needs UK more than the UK needs it thus, the Union especially Germany will do all it can to ensure that UK does not depart from the Union. This will be done by agreeing better terms for its membership. However, relying on this belief has twice ended up isolated; first time when David Cameron tried to veto EU fiscal pact in 2011 and second time when he wanted to block Jean Claude-Juncker as European Comission President last year.

The Labour Party, on the other hand, sees “Brexit” as a threat to the UK economy. To start with they have pointed at the single market, UK enjoys because of being a member of EU. If Brexit vote goes through however, UK will have to carry out trade as an independent nation. This will lead to large trade barrier especially when it comes to EU members. These trades tariff will eventually scare aware investors from UK. On top of that, UK citizens will have to deal with new regulations when visiting other European countries. This will also include acquiring new passports, something which will prove very costly to achieve. Labour Party has received major backing from their former leader and Prime Minister Tony Blair. He pointed that carrying out a referendum on “Brexit” would cause economic chaos since it would lead to job insecurity, uncertain future among other problems that would leave British economy hanging by a thread. He also claims that David Cameron doesn’t actually want to leave EU and “Brexit” is more of a manoeuvre to access the UKIP Party (United Kingdom Independence Party) voters.

Here are some results of surveys on possible referendum on Britain’s membership of the EU polled by 1,000 adult residents of Great Britain via online panel on 27th of June, 2014. (http://survation.com/latest-westminster-voting-intention-and-eu-views-in-survationmail-on-sunday-poll/) 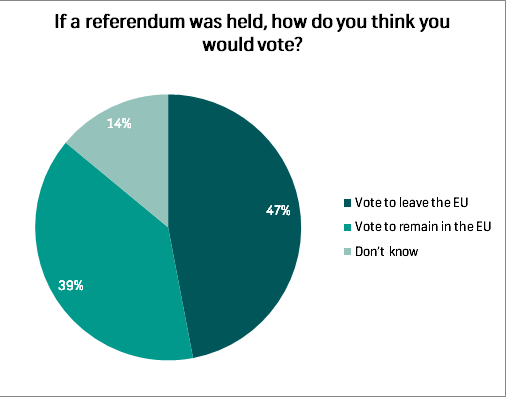 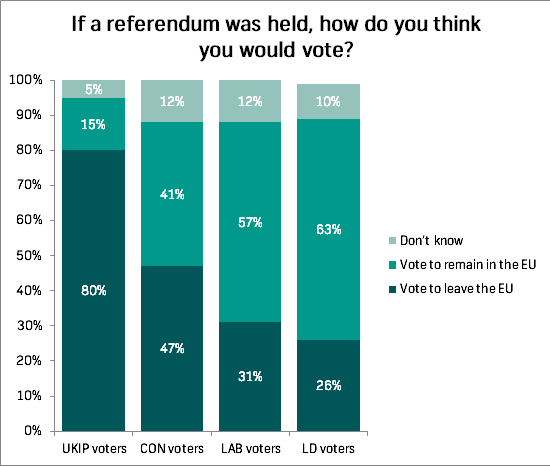 It now remains to be seen which side the Britons will take when they go to the polls. Two things are clear though; investors are scared of the change that may occur because nobody is sure if the British economy will take a turn for the worst or for the best. At the same time, people are excited at the prospect of a better country with more freedom outside the EU.