UPA Columnist Miss Hicran Cigdem Yorgancioglu shall be at Tehran International Book Fair 2015 (6-16 May 2015) in Tehran, Iran. Miss H. Cigdem Yorgancioglu, enthusiast of Iranian culture, sends her special thanks for the support and the contribution of Consulate General of the Islamic Republic of Iran in Istanbul. Mrs. Yorgancioglu will make a keynote speech called “Keystone of Cultural Bridge” regarding the perception, perspectives, culture, art, literature, society and values between Turkey and Iran at the momentous book fair that shall be held at Imam Komeyni’s Grand Mosalla Mosque/Tehran/Iran. Yorgancioglu’s book signing shall be held on 7th May 2015. 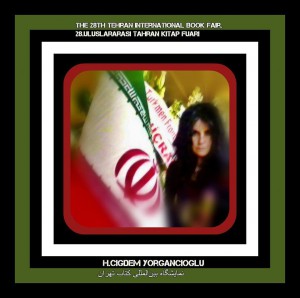 Here are the few words from her speech;

Turkish and Persian (Farsi) cultures are the two foremost neighboring civilizations that have inclined and fed each other for numerous centuries not only in geographical sense, but also in the framework of exchange and cohabitation of literary values. Surely, the importance of religious character shoud not be denied as well. In Turkey, even though the vestiges of Sufi scholars from Central Asia and the influence of the wise men of Khurasan still exist, evidently the inspiration of Iranian Sufism, is present particularly in poetry. Sheikhs from Central Asia, such as Khoja Ahmed Yasawi, their disciples and the wise men (alim) of Khurasan played a significant part in the progress of Islam and Sufism in Anatolia. Such influence, was also felt indirectly. I would like to draw your attention to the fact that if Anatolia adopted Sufism, this is due to a massive extent to Anatolian Islamic scholars, such as humanist poet, jurist, theologian, and Sufi mystic. Mawlana Jalal-ud-Din Rumi (also known as Jalal ad-Dīn Muhammad Balkhi), Alevi mystic, Muslim Sayyid, humanist, philosopher Haji Baktash Wali and Es-Seyyid Ahmed Emir Buhari known as Emir Sultan. Iranian poet, Baha’uddin, the son of the famous Mowlana Jallaluddin, composed a poem entitled Rubab-Nameh in Farsi language, in which he embraced 156 Turkish verses. This was the commencement of Turkish literature under Iranian inspiration. However, it required additional impetus. This time from an Iranian statesman, inguist, mystic, poet and painter Mir Ali Shir Nawai, the Minister of State for Sultan Hussayn Bayqara, ruler of Herat.

ARTS AND POLITICS DEBATE IN TURKEY AS NEW SPACE OF POLARIZATION