Since Sino-American relations seem to have entered into a tense new period in recent years due to growing Chinese enthusiasm in political and economic leadership in the world politics, it might be a wise effort to look at past experiences and especially concentrate on the Sino-American normalization that took place in the early 1970s.

Cold War not only took place in Europe, but also in Asia. US policy in East Asia was focused primarily on the elimination of the menace of Japanese militarism and on the support of the nationalist government of China under Jiang Jieshi (Chiang Kai-shek) as the main pillar of stability in Asia. But within 5 short years, the US was confronted with a set of affairs very different from what Washington had envisioned just after the war. During the early phase of Cold War, US foreign policy towards Asia was very successful concerning the demilitarization and the restructuring of Japan, but complete disaster concerning the stability in China. The nationalist regime in China was defeated by the Chinese communists who, under the leadership of Chairman Mao Zedong, proclaimed the founding of the People’s Republic of China on October 1, 1949. The largest nation on earth was now under communist rule. Only 9 months later, the communist forces of North Korea invaded the US-supported anti-communist regime in South Korea, and in the Korean War, for the first time, the rivals of the Cold War, East and West, clashed in the field of battle.

Following the Korean War (1950-1953) which had disastrous consequences for all sides and no visible gains, US military involvement in Vietnam (1965-1973) that resulted in the greatest failure of American foreign policy during the Cold War, ironically, coincided with the gradual improvement of bilateral relations between Washington and two great communist states: USSR (Union of Soviet Socialist Republics) and China (People’s Republic of China). The first détente took place in the 1960s between Washington and Moscow and eased the tensions. However, US-USSR détente was not very fruitful and did not turn out to be a long-term rapprochement. The second détente on the other hand, saw the normalization of relations between US and China. As a result, US President Richard Nixon visited Beijing in 1972. The second détente was a successful initiative and it gradually improved relations between Washington and Beijing. Sino-American normalization was one of the turning points in Cold War history according to many observers since it made US more advantageous and stronger against Soviet Russia.

The split between USSR and China gave the US a golden opportunity during the most critical times of the Cold War. Rapprochement between the US and the vast Chinese Empire could only give the Soviets a headache and it did. At the first phase of the Cold War, it had been Moscow that had been able to play the “China card” against USA. By doing this, Russia was able to set its first line of defense in the east on the shores of the Yellow Sea. Moreover, Russia found a strong partner in the Asian world and Chinese support (a country then ruled by Maoism, a variant of Marxism-Leninism) ideologically meant a stronger international communist movement. However, things began to change with the Sino-Soviet split.

The Sino-Soviet split became manifest in the late 1950s. China’s founder and undisputable chef Mao Zedong was already blaming Americans for “capitalist imperialism”. But after the Sino-Soviet split, he began to perceive Soviet leader Joseph Stalin as a “capitalist roader” and blamed Russians for “socialist imperialism”. This meant a more neutralized China, closer to the Non-Aligned Movement rather than the Communist world. This was surely a big loss for Russia but US-China normalization still seemed impossible.

Sino-Soviet split was a great chance for the Sino-American normalization. However, two countries had no official relations for more than 20 years and they were acting hostile to each other. Successive US Presidents were denouncing “Red China” as a menace to the peace-loving peoples of Asia. US was maintaining relations with nationalist regime in Taiwan and was calling Taiwan as the only legitimate government of China. Until now, US and its allies implemented harsh embargos on China. However, in 1964, independent-minded French government led by Charles De Gaulle broke ranks and extended formal recognition to China.

This interminable hostility between USA and China ended quite suddenly in the early 1970s, in one of the most dramatic turnabouts in modern diplomatic history. On July 5, 1971, President Richard Nixon made an unanticipated announcement that stunned the world. He stated that he intended to travel to China within 6 months, at the invitation of the Chinese government, for the purpose of developing friendly relations with that government. He revealed that his secretary of the state, Mr. Henry Kissinger, had just returned from a secret trip to Beijing where he and Chinese Premier Zhou Enlai had made arrangements for this diplomatic breakthrough.  The Nixon administration had begun making subtle overtures to China in the previous year. In Warsaw, where the US and Chinese ambassadors had periodically engaged in secret talks, the US side intimated its desire for improved relations. President Nixon started to call China with its official name instead of “Red China” or “Communist China”. 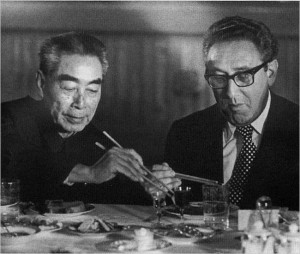 This opened door for “ping-pong diplomacy”[1], a public relations effort to prepare two societies for the normalization of relations. A US table tennis team was invited to play an exhibition tournament in Beijing, and Chinese Prime Minister Zhou Enlai gave them a warm reception. President Nixon responded by a relaxation of the US trade embargo on China. This was followed by Kissinger’s secret trip to China in July 1971. The following February, President Nixon made his historic two-week visit to China.[2] Nixon was accompanied by a large group of journalists and camera crews. This was very ironic that an anti-communist political figure like Nixon achieved this historical change in bilateral relations, since it was the first time that a US President visited communist China. Both sides came to the realization that they had much more to gain by ending their mutual hostility than by continuing it.

Sino-American normalization meant for China a quick entry into UN and to have a better position concerning the Taiwan question. China’s international prestige increased quickly and they gained a lot from developing economic relations with US. US also gained a lot from this policy. Nixon and Kissinger developed a new design for global balance of power with this diplomatic initiative. Two superpowers were to be replaced by 5 major power centers in this new design: US, USSR, Western Europe, Japan and China. Moreover, the US was now playing the China card in its relations to Moscow.

The major obstacle for the developing relations was now Taiwan problem. US leaders formulated “two China formula” by recognizing both of the countries. Thus, China became a member of UN and replaced Taiwan as one of the five permanent UN Security Council members. This was just beginning of the normalization process. Formal recognition of China by the US took place few years later in 1979. This was delayed by several reasons; Watergate scandal, death of Mao and Zhou and internal problems in Chinese leadership until Deng Xiaoping’s consolidation of power in 1978. President Carter and Deng became two leaders to resume full diplomatic relations. By this move, China was recognized by all countries in the world and got rid of isolation. This also led to a normalization of relations between China and Japan.