Yesterday, around 10 p.m., Turkish television channels and news agencies began to spread last minute news about few hundred Turkish soldiers trying to take the control of Bosphorus Bridge in Istanbul. The first reaction of the anchors and commentators on tv was that there might be a terrorist attack threat from ISIS and soldiers were taking necessary measures. This was followed by the news about Turkish F-16 jets that were accompanied by Sikorsky helicopters flying over important governmental buildings in Ankara. Explosions and gun fire were reported in Ankara around the Turkish Armed Forces (TAF) Headquarters, Turkish Grand National Assembly (TBMM) and Turkish National Intelligence Agency (MIT) buildings. Soon, it was found out that a small faction within the Turkish Armed Forces’ Gendarmerie branch and Air Forces seized the control in Ankara and tried to make a military coup against the democratically elected civilian government that was often blamed by the international media and Turkish liberals for leaning towards Islamist and authoritarian rule. Few minutes later, Prime Minister Binali Yıldırım announced that there is in fact a real coup attempt in the country. Later on, a short declaration reminding the e-memorandum on April 27, 2007 was published from the website of TAF about the reasons of the military coup. A longer coup declaration was forcefully read from the official state television channel TRT.

Few hours later, President of the Republic Recep Tayyip Erdoğan, by using social media tools from a cell phone, announced that he is safe and Turkish citizens should go out into the streets in order to prevent the coup. The control of CNN Turk tv channel was taken by some soldiers in live coverage and the channel stopped broadcasting for a few hours. Upon the invitation of Erdoğan, thousands of people went out into the streets and began to clash with soldiers. There were some skirmishes taking place between soldiers and citizens and a total of 161 people, mostly soldiers and policemen, were killed. There were also armed clashes between policemen and soldiers in Ankara. Approximately 1.400 people were wounded due to yesterday’s clashes that continued until the early morning in Istanbul and Ankara. Other cities of Turkey on the other hand mostly stayed calm. In some conservative Anatolian cities, few thousands of people gathered around large squares in order to protest the coup. In the early morning, soldiers in Istanbul began to capitulate by realizing that the coup attempt eventually failed. However, as a reaction to soldiers’ attacks on civilians, Erdoğan supporters began to attack soldiers and killed some of them. A few radical Islamists even beheaded a Turkish soldier. 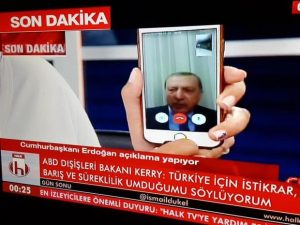 Although the event is largely seen as hoax by the opponents, what we know so far can be summarized as follows; 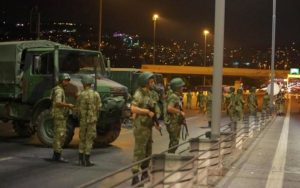 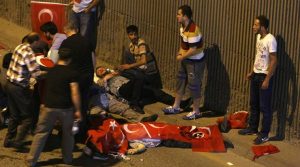 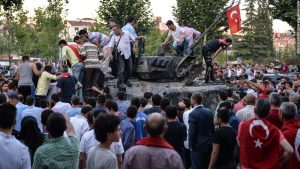