Turkish people voted slightly (% 51,41 “yes” votes against % 48,59 “no” votes) in favor of the constitutional changes proposed by the governing Islamist Justice and Development Party (JDP-AKP) and Turkish nationalist Nationalist Action Party (NAP-MHP) in a historical referandum yesterday. Constitutional changes allowed Turkey to make a quick transition into the Presidential system from a century old parliamentary tradition. However, close results show that the transitional process will not be easy and the right-wing coalition established by JDP and NAP do not have support from other segments of the country. Especially the rising votes of the pro-secular Republican People’s Party (RPP-CHP) could be alarming for Erdogan in the years to come. 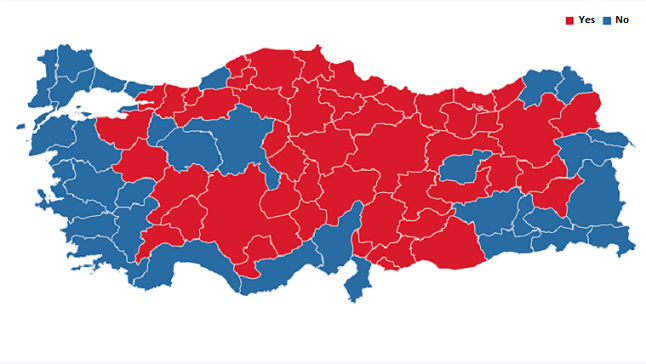 Voting turnout for the referandum was above 85 %, which once again shows that Turkish people love to vote and they are really interested into politics. However, ordinary people in Turkey have no idea about the virtues or perils of Presidentialism; they voted “yes” if they like and support Erdogan and voted “no” if they do not approve Erdogan. This was a referendum based on the vote of confidence for Erdogan rather than a systemic change. Constitutional changes made Turkey a Presidential country similar to its nearly 70 years old ally United States. But unlike the U.S. Presidentialism, Turkish Presidentialism creates a very strong Presidential post and do not create any check and balance mechanism for limiting the power of the President. Although Turkish people still have right to change the President in Presidential elections organized in every 5 years, Turkish President’s power would be equal to that of the Mexican President in terms of its nearly unlimited authority during the tenure in office. Turkish President Recep Tayyip Erdogan will use the new system (some Turkish journalists call it Executive Presidency) to reshape the country as he wishes without any legal barrier. He, thus, will now face difficulties in blaming other groups and people when there are problems, since he has become a “modern Sultan” in the new system. One interesting point is that three biggest cities of Turkey (Istanbul, Ankara and Izmir) voted against Erdogan; a clear proof of JDP’s political support concentrated in the newly developing Anatolian cities full of pious and nationalist people. In my opinion, Turkey still poses a good example for modernization theory since majority of the people living in big cities are in favor of more secular and democratic state and are against Erdoganism.

Now, I would like to point out some recent political developments in Turkey which might explain how JDP won the referendum although they have got less votes then they expected.

Political crises with European countries: Nearly a month before the referendum, Turkey had serious political crises with some European countries including Netherlands and Germany, which allowed Erdogan to attract right-wing voters that were uncertain about how to vote. Especially far-right leaders in Europe and their Islamophobic arguments also helped Erdogan to convince Turkish people that Islamists are the best option for Turkey and that Europeans have a Crusaders mentality against Turks.

NAP support and nationalist rhetoric: Unlike previous electoral campaigns during which Erdogan and JDP adopted a reformist position on the Kurdish question, Erdogan this time built his rhetoric on nationalism and attracted Turkish nationalists’ votes easily especially after the unexpected support provided by the NAP leader Devlet Bahceli. With the official transition into Presidentialism (classically implemented via two-party systems such as in the U.S.), we can even claim that the NAP will not be an influential political party anymore and JDP will represent the right-wing bloc especially in the Presidential elections.

Islam card in gaining Kurdish votes: Although he adopted a more nationalist rhetoric, Erdogan increased his votes in some of the southeastern Anatolian cities densely populated by Kurds. Here, Erdogan used the Islam card as a strong factor over the pious Kurdish population.

Turkish people prefer strong leaders: Instead of supporting democratic European type leaders such as RPP leader Kemal Kilicdaroglu, Turkish people are often in support of strong and authoritarian leaders due to Turkey’s increasing security risks as a country neighboring Middle East as well as the country’s unique political culture built upon the success story of one-man as the leader (Mustafa Kemal Ataturk). So, Erdogan used his charisma to convince people that this will be the best option for them if they support him to become the ultimate President.

It was not a fully democratic process: Frankly speaking, the referendum process was not 100 % democratic. Opposition parties and the opposition camp in general were given less television coverage and JDP used the state power as an instrument to prevent their rivals’ propaganda activities.

As Turkey’s economic performance slows down, it seems like Erdogan will use his powers to weaken the opposition in the next few years and create a one-party dominant state (dominant-party system in political science literature) similar to Azerbaijan and Russia. However, Turkey is a country that has nearly reached European standards in terms of its democracy in the mid-2000s and many people might not support Erdogan if they think they are distancing from democracy. So, next few years will be of critical importance for the future of Turkey. One important point is that, since now there is an official Presidential system, RPP and other opposition parties must try new strategies in order to become more successful. For example, RPP might try to gain NAP supporters and establish a secular nationalist rhetoric or might realign itself as a real left-wing party in order to attract Kurdish votes.