Fareed Zakaria[1], a well known Indian-American writer works as the host of CNN tv channel, the editor of International Newsweek magazine and a columnist in the The Washington Post journal. He is the author of five books, three of them international bestsellers, and the co-editor of one. Zakaria is a journalist who has made significant contribution to Political Science literature. In this article, I am going to summarize two important articles written by him. 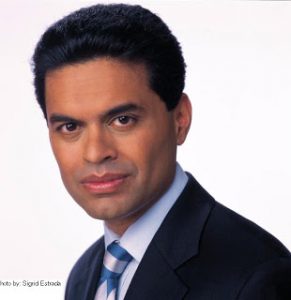 In his article “Islam, Democracy, and Constitutional Liberalism”[2]. Fareed Zakaria first explains the dilemma of autocratic states versus illiberal societies in Middle Eastern countries. In his idea, all states in the Middle East have to be autocratic; because if free elections are hold in these countries, the regimes that would replace autocratic or monarchical systems would be more fundamentalist and oppressive. He supports this idea by giving examples like the King Abdullah of Jordan and Hosni Mubarak of Egypt. Zakaria claims that religious extremist groups like Osama Bin Laden’s Al-Qaeda find huge support from Arab people and thus, free elections in Arab countries would turn into a disaster. The writer goes forward by stating some of Bin Laden’s ideas. In Bin Laden’s view, Middle Eastern countries are insufficiently Muslim and democracy is a Western invention which does not comply with Islam. He wants to create regimes ruled by Sharia law and takes ex-Taliban regime in Afghanistan as a model.

Zakaria moves forward by making quotations from some scholars who assert that Islam is the reason and the source of backwardness in these countries. According to Zakaria, the problem in Middle Eastern countries is not about the backwardness of Islam, but rather the absence of authority in Islam. Muslims do not have a Pope and in a religion without an official clergy, even Bin Laden can issue fatwas (religious directives). Zakaria also says that there are many other countries like Turkey, Pakistan, Indonesia and Bangladesh having millions of Muslim population but make quick steps towards modernity. In Zakaria’s view, the problem lies in the Middle Eastern countries and in the Arab mind or Islam.

Zakaria also points out that among the 22 members of the Arab League there is not a single electoral democracy. Arab people hail their new leaders like saviors every time, but soon all of these leaders become dictators and problems go along. The story of Gamal Abdel Nasser of Egypt is very important to understand the Arab mind in Zakaria’s opinion. Nasser became the leader of Egypt in the 1950s as a modern politician with socialist appeals talking about the unity of Arabs (Pan Arabism). Nasser was successful in acquiring power of his people, but his secular tendencies made him the target of many Islamic extremist groups. His failures against Israel also decreased his power and Pan Arabic dream ended. Zakaria further mentions that the source of problem in the Middle East is not related to economic difficulties or education. He states that the leaders and even the militants of Al-Qaeda are well educated people coming from rich families. In Zakaria’s view, the problem is not poverty as well; instead its the excessive wealth in these countries. A family like Bin Laden’s can establish an army for itself and there are many groups and people supporting and funding Islamic extremism and terrorist groups. Zakaria says that it is easy for these countries to import Western goods, but not the Western democracy. Moreover, he states that Iranian Revolution and memories of glorious Nasser years created a Western enmity called Westoxification. Zakaria finishes his article by giving his prescription to solve problems. He believes that the most important thing to be realized in these countries is constitutionalism. After creating an electoral system, all problems could be solved in his idea in time.

The Rise of Illiberal Democracy

Fareed Zakaria begins this article[3] by mentioning about rising nationalist and racist movements around the world. In his view, unfortunately democratically elected governments are routinely ignoring constitutional limits on their power and depriving their citizens’ basic rights and freedoms in many parts of the world. Although in statistics, today 118 of the world’s 193 countries are democratic; there is a growth in the number of “illiberal democracies. Half of world’s democracies are illiberal democracies.

Liberal democracy: Western democracies that have the qualities of not only free and fair elections, but also many additional institutions and norms like the rule of law, separation of powers, protection of basic rights and liberties of speech, assembly, religion and property. Zakaria calls this as “constitutional liberalism” and differentiates it historically and theoretically from democracy.

Differences between democracy and constitutional liberalism are:

Democracy: It basically means the rule of the people. Democracy is realized by holding free and fair multiparty elections. Samuel Huntington believes that universal suffrage is not the sine qua non condition of democracy, but it would increase the level of democracy in a country. He also adds that although democratically elected governments can be corrupt, shortsighted and irresponsible. This does not mean that they are not democratic. Democracy is only of the public virtues not the whole. Thus, we call a country democratic if free and fair multiparty elections are held. This understanding is parallel with the minimalist understanding of democracy. (Joseph Schumpeter’s definition and Huntington’s two turn over test etc.) The broader definition of democracy requires other qualities of liberal democracies such as the rule of law, other comprehensive social, political, economic and religious rights. Zakaria thinks that these qualities are caused by the constitutional liberalism rather than democracy. Democracy is about the accumulation of power. It takes its roots from French Revolution.

Constitutional Liberalism: Zakaria thinks it is not about the procedures for selecting government, but rather about government’s goals. It refers to the tradition, deep in Western history that seeks to protect an individual’s autonomy and dignity against coercion whatever the source is (whether the source is state, church or society). It has developed in Western Europe and USA. To secure these rights, it emphasizes checks on the power of each branch of government, equality under the law, impartial courts and the separation of church and state matters (secularism). The philosophy behind constitutional liberalism is natural rights theory which claims that human beings have some inviolable rights like the right to live, right to have property etc. John Locke, Adam Smith, Montesquieu, John Stuart Mill, Isaiah Berlin are some philosophers contributed to this conception. Whereas democracy is about the accumulation of power, constitutional liberalism is about the limitation of power. It takes its roots from the Declaration of Independence.

Western Way versus Other Ways:

But even in the 1830s, there was a limited constitutional liberalism such as the rule of law, private property rights, increasing separation of powers, free speech etc. (it traces back to Magna Carta of 1215 and Glorious Revolution of 1688).

Western model is not only symbolized by plebiscite, but in addition with the impartial judge. There are also historical factors that promote democracy in the Western world such as capitalism, strong bourgeoisie, high per capita income (Zakaria’s views are in the same line with modernization theory and scholars like Seymour Martin Lipset). In Zakaria’s idea, in the Western world, constitutional liberalism led to a better democracy day by day. However, democracy does not necessarily lead to constitutional democracies.

Other Ways: In other countries, modernization did not emerge like in the West. Historical-structural differences including the lack of a strong bourgeoisie, as well as the lack of mercantilist and colonist era and the failure of state led development models could be influential factors in this trend. In addition, democracy has been introduced before constitutional liberalism in most of these countries. So, we can say that although constitutional liberalism leads to democracy, democracy does not necessarily lead to constitutional liberalism. Latin America, Africa, parts of Asia are still full of failed-states, semi-democracies and illiberal democracies. Usurpation is very common among Latin American governments and former Soviet Union countries. In these regimes, presidency is also stronger. (Presidential democracy)

Vertical usurpation (more common): limiting the power of regional and local authorities as well as private businesses and other non-governmental political actors.

Horizontal usurpation: limiting the power of other branches of the state, increasing the executive powerà decrees are frequently used by Carlos Menem in Argentina.

Michael Chege: In Africa, there is an overemphasis on multiparty elections which neglects basic tenets of liberal governance.

In the Middle-East, democracy leads to stronger Islamic, anti-secularist regimes. Moreover, Presidents in these countries sometimes had to make usurpations in order to preserve democracy and make structural reforms for modernization. (IMF policies in Latin American countries for instanceà Menem, Fujimori, Abdala Bucaram of Ecuador). However, Zakaria thinks that reforms would not be permanent if they are not supported and made in accordance with constitutional liberalism. They can also choose the populist way and cease to make reforms that are against the will of people. They can use nationalist and religious discourse for votes.

Myron Weiner thinks that the success of liberal democracy’s chance in a country is based on constitutional past of this country. For instance, ex-British colonies’ democracies are more successful because British implanted constitutionalism, rule of law before although their colonial rule by nature was not democratic. However, eastern European countries have been able to pass successfully from communism to liberal democracies.