I participated into an international conference (AEC17 – Administration and Economics Conference 2017) organized by Lebanese French University and Erbil Polytechnic University last week and had chance to visit Erbil city once again for two days after two years.[1] Capital city of Kurdistan Regional Government, an autonomous region of the Iraq state, has continued to develop in the last two years despite of economic problems. In this piece, I am going to summarize my observations about my second visit to Erbil city. 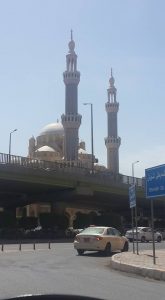 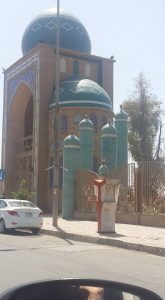 The first thing I noticed at the Istanbul Ataturk Airport was the agony of international tourists waiting in the lines for passport control for more than two hours. The problem is caused by the dismissal of thousands of police in relation to last year’s coup attempt due to their relation to Fethullah Gülen community. The coup attempt was a bloody event and those who organized it should be punished without any doubt. However, it is very sad to see that without a proper trial and court decision, the government used this attempt as an opportunity to cleanse the bureaucratic posts from opposing voices including Gulenists, leftists and pro-Kurdish civil servants in times of the state of emergency. In that sense, the post-failed coup period in Turkey was not very different from earlier post-coup periods. Moreover, it seems like touristic attractiveness of Turkey will continue to decline in the next months because of the safety concerns and uncomfortable services offered at the Istanbul’s main airport.

When I arrived at the Erbil city, I noticed that the prayer to call was a bit different than the classical Turkish prayer to call made in Arabic, probably caused by the sectarian difference between Shafii Kurds and Sunni-Hanefi Turks. Erbil was lively and crowded but not as suffocating as Istanbul which now hosts approximately 20 million people. According to official statistics, Erbil has a population around 1.8 million and it continues to develop.[2] There are thousands of American and British people working in military and civil duties in the city in addition to ten thousands of Turks. Moreover, there are around 30 Consulates in Erbil.[3] These include important countries in terms of diplomacy such as the United States, China, Russia, United Kingdom, France, Germany, Italy, Japan, Spain, Egypt, Netherlands, Sweden, Jordan and Greece. Turkey also has a very active and big Consulate in Erbil as one of the most influential countries in the region.[4] Some people from the government and Kurdish academics also told me about Azerbaijan’s efforts to establish a Consulate in Erbil, but I do not know for the moment if it is correct or just a rumor. American influence in Erbil is very visible although Americans are not around in day time. American cars and jeeps are more common here compared to Turkey. In addition, US dollar is the second official currency in Erbil. You can even exchange dollars in the street via mobile clerk exchange offices. Here, I should add that there are two American universities in Kurdistan Regional Government; one in Duhok (Dohuk) and the other in Sulaimaniyah. Especially The American University of Iraq Sulaimani is very famous and successful in education according to official reports and assessments. The U.S. has also invested a lot in Kurdistan in terms of security and it plans to have a total of 5 military bases in Erbil in the near future in order to coordinate its Middle East policy.[5] While this might be good for the stability and security in the region, it also worries many people in Turkey since Turkey’s strategic importance might reduce in the eyes of its Western allies if there will be another independent state in the Middle East like Kurdistan, which would probably become a staunch American ally. United Kingdom is also very influential in Kurdistan and there is a British university (British Royal University) in Erbil. More importantly, oil drilling rights in the Kurdistan region is in the hands of British and American companies. This provides a kind of guarantee to Kurds in the times of ISIS and radical terrorist movements. 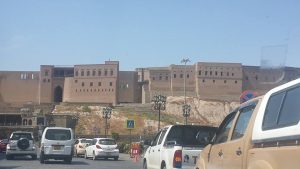 At the Erbil Castle 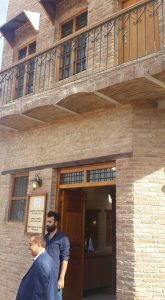 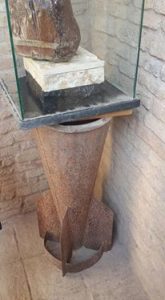 A rocket that was used in Halabja chemical attack in 1988

Erbil Castle was at its place as two years earlier but the Kurdish flag seemed larger to me this time. Kurdistan flag was an element of crime in Turkey just few years ago, but recently when Kurdistan leader Masoud Barzani visited Turkey, Turkish state welcomed him with the Kurdistan flag in addition to Iraq flag and Turkish Prime Minister Binali Yıldırım defended this policy as a response to some critiques coming from nationalist circles.[6] I also noticed that the settlements around the Castle are evacuated due to restoration project. There is a small souvenirs shop and a museum of gems and stones as well at the Erbil Castle.

On the first day, we visited the city-center with other Professors coming from different countries. Lebanese French University Rector and Dean helped us a lot for having pleasant time. My students from North Cyprus became academics and assistants here and they received me warmly in Erbil. We had a lunch at Yasin Kebab, a famous restaurant here. Erbil is a typical Middle Eastern city that is developing, but still has some problems. Streets are not very clean and social life is often restricted to restaurants and malls. Restaurants are quite good and their food are delicious; but for attracting international capital and labor force, Erbil still needs more activities and places. Hotels are also quite good and they are mostly constructed by Turkish firms. Turkish businessmen needs to invest more in Erbil if they want to increase Turkey’s power and sympathy in the region. I also noticed that there were many security people around the city, which might be disturbing for tourists; but I should admit that living in a safe city in Iraq is not that easy these days especially considering the rest of the country. 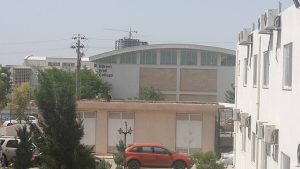 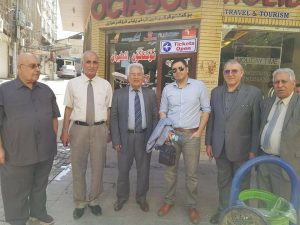 12 Professors from 6 countries participated into the conference

Second day is separated to academic activities. AEC17 is organized at the Lebanese French University’s main campus, a university that was established 10 years ago and giving education in Kurdish and English languages. However, they have a French language department as well. The organization was carefully prepared and was very good. Two Ministers (Minister of Agriculture and Minister of Higher Education) from the Kurdistan government also joined the conference and made opening speeches. Kurdistan Region established a separate ministry for Higher Education, which shows that they take this issue very seriously. Education is the key to success in developing countries and regions; not because it increases the quality of social capital and raises the new generations, but also plays a beneficial role as a development model by attracting foreign students and academics. The number of universities in Kurdistan region are not too much for the moment[7], but they are getting better and employs some foreign academics as well. The only Turkish university here is the Işık (İshik) University that was established by the Gülen community few years ago. However, due to Turkish government’s pressures, education activities of the university have become problematic in the last months though it is still open. Bilkent University also established a very quality college here for secondary education, Erbil Bilkent College, as another Turkish educational investment in the region. It would be very beneficial for Turkey and Kurdistan if Bilkent University might open a campus also in Erbil for higher education. The conference was a great success and everyone enjoyed the day. My presentation also was praised, but I had to respond to some critics in relation to Turkey’s democratic level after the detention of pro-Kurdish party HDP’s top officials including the party leader Selahattin Demirtaş as well as the authoritarian model adopted by the government in the last months. However, I realized that Kurds in Iraq support Turkey and they know that their economic success is greatly dependent on Turkey. Turkey’s increasing oil purchases from Erbil and its new investments might make this region a new Paris in the Middle East, or Erbil might stay as an ordinary Middle Eastern city.

My visit to Iraqi Turkmen Front branch in Erbil

After the conference, I also paid a visit to Iraqi Turkmen Front branch in Erbil. As a strong supporter of minority rights in all countries, I think supporting the rights of Turks in Cyprus or Turkmens in Iraq will not be an act of ultra-nationalism, but rather of democracy. I once again heard that Turkmens are happy living with Kurds in Kurdistan, but they have many problems related to finance and education. Turkish universities might provide scholarship for one Turkmen and one Kurdish student each year; which would mean, every year there will be almost 200 Iraqi (Kurdistan Regional Government) citizens that will be raised by Turkish universities. It is a fact that Turks, Kurds and Turkmens are obliged to live together in this region and they could find better policies to live in peace by erasing the memories of the past that is overshadowed by the terrorist activities of PKK.

Lastly, I made some unofficial contacts with people from the government about the political future of Kurdistan and Iraq. The most important issue was the reopening of the parliament that was dissolved several months ago by Barzani. Masoud Barzani has consolidated his leadership and grasped the power in the Kurdistan region in recent years and he thinks that in the times of ISIS and potential Kurdistan independence referendum, a maximalist form of democracy is not convenient. However, since he wants to become Kurds’ Ataturk and establish an independent Kurdistan state, I should remind him that Mustafa Kemal Ataturk ruled Turkey’s National Struggle and Independence War from the Turkish Grand National Assembly. Thus, a democratic parliament is absolutely needed for Kurds and all other nations. Other than this, there are rumors and news about an independence referendum in August or September; but this would not be binding if there is no agreement reached between Turkey, Iran, USA and Iraq. An independent Kurdish state might still be considered risky by some regional and international actors, so, Barzani and Kurds should be very careful in planning the future. Although as CFR expert Steven Cook writes, “conditions are ripening for a Kurdish state”[8], a wrong and unplanned move might spoil all the efforts that were made until today. As a Turkish citizen who loves both Kurds and Turks, I hope our nations would find the best way to live together in peace and harmony.