What is expected and spoken finally happened and the President of the Kurdistan Regional Government of Iraq and the leader of Kurdistan Democratic Party (KDP), Mr. Masoud Barzani, yesterday announced that an independence referendum will be hold on September 25, 2017.[1] Kurdish Islamic Party (Komal) and some representatives of other parties also made press declarations in support of Barzani’s decision.[2] Hemin Hawrami, senior advisor to President Barzani, claimed that there will a simple “yes or no” question about Kurdish independence and Kirkuk, Khanqin, Sinjar (there is PKK presence here) and Makhmor regions will also be included to referendum.[3] Kurdistan will also organize a parliamentary election on November 5, 2017 in order to convene the dissolved parliament. Kurdish officials insist that the referendum will be binding and that is their natural right whereas Baghdad still remains silent. However, previously Kurdish officials told Reuters that a possible independence referendum would be legally non-binding and would mostly serve to strengthen Erbil’s hand when it comes to direct talks with Baghdad on greater autonomy or a path to eventual independence.[4] One thing is certain; there will be a binding or non-binding independence referendum in Kurdistan Regional Government on September 25, 2017. Then, what could be potential outcomes of the Kurdish independence referendum? What will be Turkey and Iran’s reactions? I’ll try to give answers to these questions in this piece. 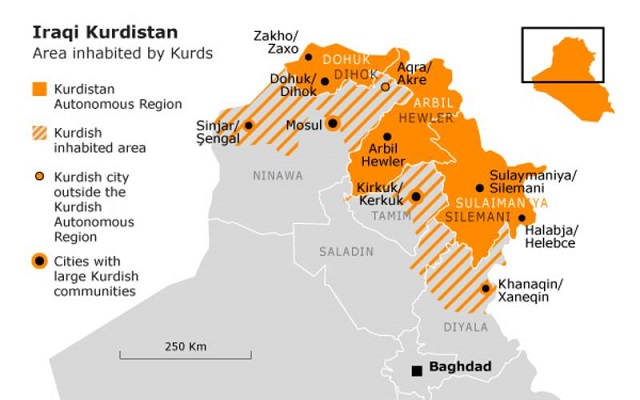 Until now, Turkish state and media remained silent about Kurdish declaration of independence referendum. Turkish media is so busy with the Gulf (Qatar) crisis and Turkish football player Arda Turan’s decision to quit the national team! On the other hand, Turkish parliament ratified a new law yesterday about deploying military troops to Qatar.[5] It seems like Turkish state and media tries to attract Turkish people’s attention to other areas in order to prevent ultra-nationalist reactions. This might be a good strategy; but if the Kurdistan will become an independent state in the near future, there will probably more reactions coming from the secular nationalist circles. Iranian foreign minister Mohammad Javad Zarif was also in Turkey yesterday.[6] Although the press pointed out the Gulf crisis as the main reason of this visit, I think that -behind the closed doors- Kurdish independence and Syrian civil war was also discussed between Zarif and his Turkish counterpart Mevlüt Çavuşoğlu.

The idea of a Kurdish state was a taboo in Turkey until recently, but nationalist reactions seems very much reduced in recent years. It is also a probability that the Turkish state might use the Fetö case (Fethullah Gülen community case about the last year’s military coup attempt) as a mechanism to punish ultra-nationalist groups during this process if they become so critical about the government. So, in any case, it seems like Turkish reaction to Kurdish independence will not be very reactive and will rather be limited. However, there might be reactions about the status of Kirkuk and the future of Kurdistan after the referendum. Kurdistan Regional Government claimed Kirkuk’s control in April 2017 and Kurdistan flags were started to be displayed in official buildings afterwards.[7] However, Kirkuk is a multi-ethnic city with Kurdish, Turkmen and Arab population living together for long decades. It should be remembered that Turkish President Recep Tayyip Erdoğan previously announced that Kirkuk could not be under the control of KRG and Turkey will never accept Kirkuk’s capture by the Kurds.[8] So, Kirkuk issue will continue to be a major disagreement between Turkey and Iraqi Kurds.

The future of Kurdistan will also be an important point which might lead to disaccord between Turkey and Kurds. Although he did not say it openly, Turkish President Erdoğan might have an idea of annexing Kurdistan region as an autonomous part of Turkey -by another referendum after independence- in the future if Kurds decide to break away from Iraq. This can be even beneficial for both sides; Kurds might better protect themselves against ISIS and possible threats from other countries under Turkish military’s protection. Turkey also might calm down its people by annexing Kurdistan as an autonomous region. President Erdoğan will then have the chance to suppress the ultra-nationalist critics by saying that “we have completed what Atatürk has started and now the Misak-ı Milli (National Oath) borders are completely reclaimed”. This move can also boost Turkish economy with Turkish businessmen engaging in construction business and other industries in the newly developing Kurdistan region. American and British companies operating in Kurdistan can also be comfortable about Turkish military’s protection since the break-up scenario is still very dangerous for free-market although they might prefer an independent Kurdistan. However, Kurds might not be very happy to choose autonomy under Turkey to full independence since they worked hard and fought for long years to get their own state. But for sure, if the independence scenario turns into nightmare with possible ISIS and Baghdad (Sunni Arab) attacks and Iranian and Turkish reactions, autonomy under Baghdad or Ankara can still be more attractive for Kurds. In any case, the first step will be the independence referendum and Erbil’s negotiations with Baghdad. If this first step is made, then unification with Turkey or other scenarios might be discussed.

We are living in a historic period and the Iraqi Kurds’ future will be determined in the next few years. In my opinion, three possible scenarios are like this: 1-) an independent Kurdish state, 2-) an autonomous Kurdistan region as a part of Iraq like today, and 3-) an autonomous Kurdistan region attached to Turkey. Since Mr. Masoud Barzani knows the failure of his father Mullah Mustafa (Mustafa Barzani), he should be very clever and careful about his next steps.