Russian-British social and political theorist Isaiah Berlin (1909-1997)[1] is one of the most important political theorists in the contemporary liberal thought. Born in Riga in 1909, Berlin lived in England and studied philosophy at Oxford. He worked for the British intelligence service during the Second World War in New York. Berlin, who died recently in 1997, is also known for his support to the Zionist cause. Berlin was a Jew and a committed Zionist. Generally Berlin is considered as a part of the liberal school, but his originality makes himself a school of thought. Berlin’s most important works are Historical Inevitability (1954) and Two Concepts of Liberty (1958). In this assignment, I am going to analyze some of his ideas that are mentioned in the book Two Concepts of Liberty[2]. 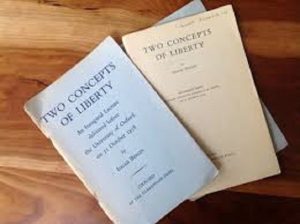 Two Concepts of Liberty was in fact the inaugural lecture delivered by Isaiah Berlin before the University of Oxford on 31 October 1958. It was later published as a 57-page pamphlet by Oxford at the Clarendon Press. It also appears in the collection of Berlin’s papers entitled Four Essays on Liberty (1969) and was more recently reissued in a collection entitled simply Liberty (2002).[3]

In  Two Concepts of Liberty, Berlin, first of all, shows what he understand from “political” at the beginning. In his view, political is not something technical that is related to means, but rather it is directly related to the ends and purposes.[4] He criticizes Positivism and Marxism for their unchangeable belief that after the final triumph of reason or proletariat class, politics would be a matter of technical issues. He rejects this Saint-Simonian and Marxist understanding of politics and theorizes politics as the very choice of ends as well as means that will be served to achieve these ends. Berlin later begins to criticize dogmatic preciseness and historical inevitability understanding of Marxism. He thinks that like the German poet Heine thought earlier, ideas are equally important as historical and structural conditions. So, he believes that French Revolution was the product of inequalities caused by the structural positioning of classes and conflicts in the mode of production as well as Jean Jacques Rousseau’s provoking ideas. According to Berlin, “only a very vulgar historical materialism that denies the power of ideas, and says that ideals are material interests in disguise” (Berlin, p. 119). By saying this, Berlin does not ignore or reject the importance of historical and structural conditions in the social change. Instead, he thinks that although these conditions are important, ideas and theories also contribute to the making of history.

Berlin, in the next paragraphs begins to explain his understanding of freedom, coercion and his famous dichotomy of “positive freedom” and “negative freedom”. For Berlin, coercion is to deprive a man of freedom. Coercion is realized through the “deliberate interference of other human beings within the area in which I could otherwise act” (Berlin, p. 122). Freedom on the other hand is self-mastery, people’s right to act without any interference from other people or institutions. He thinks that freedom consists of two different elements. The first one (negative freedom) is related to the specific area in which individuals are able to do whatever they want without any interference. The second one is positive freedom and it is about the source of interference mechanism when the individual goes out of the borders of the negative freedom (Berlin, pp. 121-122). Berlin is in the desire of as much as negative freedom possible that can be realized only by non-interference of others.[5] Berlin claims that a person has right to blame the system because of his poverty only if other people previously made specific arrangements that makes this person poor. So, Berlin claims that coercion and the restriction of political freedom are directly related with other people’s involvement and this has nothing to do with “mere incapacity to attain a goal” (Berlin, p. 122).

Berlin later starts to explain the development of negative freedom conception by classical English political philosophers. For instance, in Hobbesian thought, it is easy to perceive the efforts of determining the limits of the area in which individuals would be free. Because of Hobbes’ dark and pessimistic understanding of human nature, his theory does not lead to a theory of liberal state, but rather an oppressive absolutist regime. The reason behind these efforts is the belief that unlimited “natural freedom would lead to social chaos in which men’s minimum needs would not be satisfied” (Berlin, p. 123). In addition to this classical tradition, there have been also many libertarian political theorists like John Stuart Mill, Benjamin Constant and Alexis de Tocqueville. Berlin accepts that men are largely interdependent and “no man’s activity is so completely private as never to obstruct the lives of others in any way” (Berlin, p. 124). In other words, Berlin recognizes the fact that the liberty of some may be based on the restraint of others. He also states that priorities of different people may differ considering the dilemma between freedom and social assistance. Although social assistance is a kind of interference, it would be a better choice for a poor, illiterate Egyptian peasant compared to political freedoms. Berlin then declares his formula for the limits of freedom which is similar to Mill’s “harm principle” or John Rawls’ “theory of justice”. Berlin’s theory is that “if the liberty of myself or my class or nation depends on the misery of a number of other human beings, the system which promotes this is unjust and immoral” (Berlin, p. 125). However, if I curtail some of my freedoms in order to help other people increasing their liberty, it would be an absolute loss of liberty and loss for universal progress. As it was stated by Mill, the individual liberty is sacred since it provides spontaneity, originality, genius and human progress in total. Mill believes that without individual freedoms, the society would be enslaved by the “collective mediocrity” (Berlin, p. 127). In his view, individual freedoms would lead to a social harmony and progress instead of chaos and wars like in Hobbesian thinking. Since freedom is “pursuing our own good in our own way”, there should minimum limits on individual freedoms.

Berlin thinks that in liberal thinking, there are two dimensions. The first dimension, which is negative freedom, is about the people’s liberties without any interference. It is related to ends rather than means. The second dimension focuses on means and procedures and aims to limit people’s freedoms to secure them. Understanding the difference between these two dimensions of modern societies is crucial in Berlin’s idea. In my opinion, Berlin’s ideas can be better read from public-private and democracy-liberalism dichotomies’ perspective. As far as I am concerned, Mill takes the sides of liberalism and private sphere against democracy and public sphere. Liberalism is different from democracy and even “a liberal-minded despot could allow his subjects a large measure of personal freedom” (Berlin, p. 129). The real political for Berlin is settled in liberalism, in the private sphere, in discussions about the ends not about the means. Democracy however, is more or less a mean to secure ends and differs from the first dimension of freedom. Democracy is related with the positive freedom which is based on deciding on determining the identity and characteristics of the source of interference. Democracy is much more related to procedures and does not guarantee a life of freedom.[6]

To sum up, in my opinion although Berlin’s efforts to differentiate positive and negative freedoms are very successful, his defense for the superiority and the sufficiency of negative freedoms in parallel with the classical libertarian tradition is not plausible for me. Preventing inequalities and helping disadvantaged groups should be the focus of “political” as well as freedoms and rights in my opinion.

[4] “Where ends are agreed, that only questions left are those of means, and these are not political but technical, that is to say, capable of being settled by experts or machines like arguments between engineers or doctors” (Berlin, p. 118).

[5] “By being free in this sense I mean not being interfered with by others. The wider the area of non-interference, the wider my freedom” (Berlin, p. 123).

[6] “But there is no necessary connexion between individual liberty and democratic rule. The answer to the question ‘Who governs me’ is logically distinct from the question ‘How far does the government interfere with me’. It is in this difference that the great contrast between the two concepts of negative and positive liberty, in the end, consists” (Berlin, p. 130).