Michael Joseph Oakeshott (1901-1990)[1] is an English philosopher well known for his criticism against the rationalist thought. Oakeshott is considered as a part of conservative school for some people whereas some other people called him as a liberal conservative because of his unique views. Oakeshott’s critical approach to rationalism and modernity in addition to his theory of knowledge can even said to be a part of the post-modern school. In this paper, I am going to analyze Oakeshott’s views on rationalism in the light of his articles “Rationalism in Politics”[2] and “On Being Conservative”[3] from his book Rationalism in Politics and Other Essays[4] which was published first in 1962. 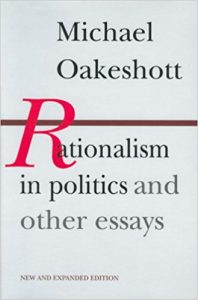 Rationalism in Politics Other Essays

Oakeshott begins the article “Rationalism in Politics” by stating that modern rationalism has a quality exclusively of its own which had a huge impact in the shaping of European politics and political thought. He thinks that all ideologies and ideas are affected by this method and they have an inevitable approach to the issues. He defines rationalism as an effort for the “independence of mind on all occasions, for thought free from obligation to any authority save the authority of reason”. In his view, rationalism is both skeptical and optimistic. It is skeptical because it tries to judge everything on the basis of its own reason and optimistic because of its total belief in the progress and reason which is “common to all mankind”. In Oakeshott’s idea, rationalism is individualistic since it finds “difficult to believe that anyone who can think honestly and clearly will think different from itself”. He criticizes rationalists for not having “negative capability”, “the power of accepting the mysteries and uncertainties of experience without any irritable search for order and distinctness”. Rationalists run after macro-theories and single ultimate truth which Oakeshott finds it wrong and diseased. He finds rationalism and ideologies based on rationalism, as fix which have “no atmosphere, no changes of season and temperature”. As far as Oakeshott is concerned, for rationalists, politics is about a technical matter which aims to solve problems by a predetermined way. Oakeshott calls this as the “assimilation of politics to engineering”. Rationalists believe that human mind is a like “tabula rasa”, a blank page, which should be taught to be used in a rational way to find the ultimate truth. “The rational solution to any problem is, in its nature, the perfect solution” according to rationalists. Thus, there is no place for “least evil” or “best of circumstances”, but rather only the “best” in rationalist approach.

Oakeshott also tells us about the development of the dominance of rationalism starting from Rene Descartes and Francis Bacon. For instance, Bacon in Novum Atlantis and Novum Organum recommends how to make the research. According to Bacon, the art of research has three main characteristics. First, “it is a set of rules; it is a true technique in that it can be formulated as a precise set of directions which can be learned by heart”. Secondly, its application is purely mechanical and does not require any addition knowledge to its technical knowledge. Thirdly, it is universal and is “an instrument of inquiry indifferent to the subject matter of the inquiry”. What Oakeshott proposes is that “politics should altogether escape the impress of so strong and energetic an intellectual style as that of the new rationalism”. “Politics of the book” should be avoided and sudden and violent changes like the French Revolution or the Bolshevik Revolution should be prevented. Oakeshott also names Machiavelli to show that the knowledge can never be solely “technical”. In Oakeshott’s view, although Machiavelli’s proposal was mostly technical, he was affected by the experiences he had before the Republic and Machiavelli was aware of this limitation. “Machiavelli was aware of the limitations of technical knowledge; it was not Machiavelli himself, but his followers, who believed in the sovereignty of technique, who believed that government was nothing more than public administration and could be learned from a book”. He criticizes the American Declaration of Independence in the similar way. Oakeshott also mentions that this kind of ultra-rationalist thinking separated politics from any kind of morality and “the morality of the rationalist is the morality of the self-made man and of the self-made society: it is what other people recognized as idolatry”.

Oakeshott in the “On Being Conservative” article very well summarizes his views. He asserts that although being conservative is not an ideological position, it is a very strong tendency. To be conservative is to “prefer the familiar to the unknown, tried to the untried, fact to mystery, actual to possible, limited to unbounded, near to distant, sufficient to superabundant, convenient to perfect, present laughter to utopian bliss”. A conservative would defend a “small and slow changes” to large and sudden changes like that of revolutions. Being conservative is to advocate a gradual change and not to reject change according to Oakeshott.

If I have to make a general comment on Michael Oakeshott in the light of these two articles, it should be said that his political positioning is closer to conservative liberalism since he does not reject change, but he clearly favors a gradual one. Oakeshott also openly says that he prefers practical knowledge, which is based on the customs, traditions of a society to technical knowledge. His rejection of objective truth makes him also close to post-modernism in my opinion. What is problematic about Oakeshott is that the content of the traditions and customs is ignored and only an epistemological perspective was used. It is truth that the source of knowledge is not only the reason or the science for many people, but rejecting objective truth totally is not right in my thinking. The worth and preciousness of human life, equality of all people are and -if not- should be, the inviolable criterion of the politics although they may be derived from the books and declarations. The content of customs is therefore very important here. We should mention that cannibalism can also be the customs of a tribe but according to our humane values, this should be changed both by technical and practical knowledge. Moreover, although Oakeshott favors practical knowledge, he does not question whether there can be any rational ground hidden behind this knowledge. If customs are created, there might have been based on rational grounds that were convenient to people who substantiated and spread this knowledge centuries ago. Moreover, his conservative approach is clearly affected from British conservatism. As far as I am concerned, the example of book here is also significant since United Kingdom does not have a written constitution, but rather ruled by strong political traditions. What Oakeshott has in mind, I think a conservative liberalism which would allow the gradual progress of the society and he takes Britain as an ideal political model for the rest of the world.