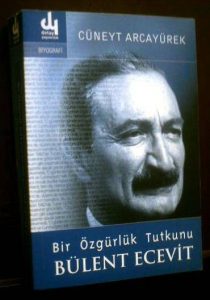 The book Bülent Ecevit: A Freedom Passionate (Bir Özgürlük Tutkunu Bülent Ecevit) was published on 2006 by Detay Publishing Company (Detay Yayınları). The writer Cüneyt Arcayürek was born in 1928 and was one of the most famous and prestigious journalists of Turkey for long years. Arcayürek worked for many decades in Cumhuriyet newspaper and wrote articles about daily politics. He died in 2015. The writer defended Kemalist-social democratic ideology after his youth. That is why, he had a positive approach towards Bülent Ecevit. In addition, Ecevit and Arcayürek had a close friendship passing the limits of a classical politician-journalist relationship. That is why, Arcayürek had all the knowledge and details about Ecevit’s career, but this situation might have overshadowed his objectivity too. The writer has more than 30 books and many journalistic awards. This book is in the memoirs format and consists of 492 pages. There are also interviews with Bülent Ecevit in the book. The book begins by analyzing Ecevit’s life and political career starting from the late the 1950s.

Arcayürek wrote that he first saw Ecevit in the early 1950s in the office of Republican People’s Party’s official journal Ulus, when Ecevit was the assistant of RPP deputy Nihat Erim. Ecevit’s father Fahri Ecevit was an ex-RPP deputy and he requested from his friend Nihat Erim to employ his son Bülent who did not want to graduate from the university (Arcayürek, pp. 16-17). Thus, Bülent Ecevit -without finishing his university education- started to work in Ulus newspaper and became closer to RPP circles and progressive writers and journalists. Ecevit, in his youth period was a timid man who was interested in literature and poetry more than politics. He married with Rahşan Aral, a classmate from Robert College at a very young age.

1950s witnessed Democrat Party’s electoral successes, but also increasing despotic policies against RPP and its supporters. Arcayürek was arrested during this period and Ulus journal was closed down. However, Nihat Erim himself established the journal Yeni Ulus and Arcayürek and Ecevit began to work there. Because of his fluent English, Erim and RPP leader İsmet İnönü was taking help from Bülent Ecevit when they had foreign visitors. When İnönü asked his son-in-law Metin Toker to become a deputy candidate from RPP, Toker suggested Ecevit to replace him (Arcayürek, p. 20). So, Ecevit’s first active engagement into politics started with this offer and Ecevit became a RPP deputy in 1957. 1957-1960 period was very troubled because of increasing polarization in the society and DP’s authoritarian policies. University professors, journalists and intellectuals were arrested because of their criticism towards DP government. So, 27 May 1960 coup was mostly welcomed in cities because of the hatred towards DP. The new founding assembly made and legislated the liberal 1961 constitution. RPP and Justice Party (follower of DP) established a coalition government and Bülent Ecevit became the minister of Social Security in 1961 (Arcayürek, p. 26). According to Arcayürek, Ecevit’s performance as the Social Security Minister was crucial in his career because his reforms and leftist rhetoric became very popular and he started to be known as a labor-friendly populist politician in Turkey. In addition, in 1965 RPP declared its leftism from the mouth of İsmet İnönü as the “left of the center” policy (Arcayürek, p. 30).

Left of the center policy was identified with the young and charismatic minister of the party. However, at the beginning, the policy became unsuccessful. RPP had defeats against Justice Party (JP) in 1965 parliamentary and 1966 Senate elections (Arcayürek, p. 32). JP was using the execution of Menderes and two DP ministers and was blaming RPP’s left of the center policy as being communist and atheist (Arcayürek, p. 35). At this point, Ecevit took the huge support of the press and intelligentsia and that is why İnönü allowed him to become the Secretary General of the party. Ecevit, by using his connections and skills, now was developing new relations with the university youth, syndicates, civil society organizations and was increasing his power and delegate support within the party (Arcayürek, p. 37). His slogans started to become more socialism-oriented during these years.[1] In Ecevit’s view, Mustafa Kemal Atatürk was a revolutionary and that is why his party RPP should continue to defend revolutionary ideas and ask for a free and equal life for all citizens in a welfare state. Ecevit was supporting a land reform project and other socialistic projects by giving examples even from Quran (Arcayürek, p. 40). İnönü day by day became more disturbed of Ecevit’s leftism and tried to control his young Secretary General. However, when Turkish Armed Forces published the 12 March 1971 memorandum and tried to create a technocratic government, İnönü’s support to military separated his ways with Ecevit. Ecevit resigned from his post and identified 12 March as a counter movement to RPP’s left of the center policies and himself (Arcayürek, pp. 43-61). In the next congress, Ecevit and left of the centre defenders achieved to defeat the legendary İsmet Pasha and Ecevit became the third Chairman of the RPP after Mustafa Kemal Atatürk and İsmet İnönü.

In 1973 elections, young RPP showed a successful performance by taking 33.39 % of total votes and became the leading party in the country (Arcayürek, p. 69). However, RPP had to make a coalition with another party due to electoral system. Alternatives were few; center-right Justice Party, Turkish nationalist Nationalist Action Party and Islamist National Salvation Party. Ecevit decided to make a coalition with Islamist National Salvation Party that was ruld by Necmettin Erbakan. This was a turning point in Turkish political history since political Islam began to be influential after this coalition when Erbakan and his followers obtained cadres in different ministries and became more legitimate actors in the political scene (Arcayürek, p. 70).

Although Ecevit seems to be a humble man, according to Arcayürek he was very a determinate and ambitious man in politics (Arcayürek, p. 81). Ecevit and his young team tried to implement bold policies in spite of their coalition partners’ problems. They did not consider American President Richard Nixon’s objections and allowed Turkish farmers to implant poppies again (Arcayürek, p. 90). When a fascist coup took place in the Cyprus Republic and the junta tried to unite Cyprus with Greece (enosis), Ecevit by using Turkey’s guarantorship rights ordered the Cyprus Peace Operation in 1974 (Arcayürek, p. 87). The operation was successful, but Turkey was subjected to huge embargos and an economic crisis started in the country afterwards. Because of Erbakan’s hostile attitudes, RPP-NSP coalition did not work and the first National Front government (JP-NAP-NSP) was established. National Front government was not willingly to prevent the fascist attacks on leftist groups and soon, the left-right conflict turned into an armed clash. Ecevit was claiming that RPP could solve country’s problems, but they should establish a single part government to work efficiently.

In 1977 elections, RPP and Ecevit showed a huge success and they took 41 % votes and 213 seats in TGNA that consisted of 450 seats (Arcayürek, p. 101). However, RPP was not still able to establish the government. So, the second National Front government was established (Arcayürek, p. 109). However, Ecevit was still determinate and he started to make secret meeting with some JP and Republican Trust Party deputies at Güneş Motel (Arcayürek, p. 117). Finally, Ecevit, with the support of some independent deputies, some oppositional JP deputies and RTP deputies, established the single party (RPP) government on 5 January 1978 (Arcayürek, p. 119). Turkish people had high hopes and they saw Ecevit as their savior, as a folk hero (Karaoğlan) who could solve economic and social problems. Ecevit’s intentions were good, but he was not able to solve economic problems and prevent terrorist attacks in Turkey. In Arcayürek’s view, although he adopted a US-skeptic rhetoric, Ecevit never thought of becoming closer to USSR, but it was a fact that he was challenging the West when they were approaching to Turkey with a double-standard mentality (Arcayürek, p. 122). At those years, the left-right clash was turning into an Alavite-Sunni division because of the provocations and terrorist attacks in Sivas, Çorum and Kahramanmaraş (Arcayürek, p. 123). Everybody began to expect another military coup, but Ecevit was still hopeful and he was thinking of a “reparation government” (onarım hükümeti) together with JP in order to solve these problems. However, Süleyman Demirel was strongly against this idea (Arcayürek, p. 130). At those years, Kurdish secessionism was also on the rise again after long years and state institutions were carefully observing this trend (Arcayürek, p. 133). Ecevit’s government did not last long and a new JP government supported by NAP and NSP was established. However, 12 September 1980 military coup was already approaching… Bülent Ecevit was arrested after the military coup and imprisoned for a few years. He continued to defend democracy and made important speeches during the trial and his imprisonment. He became the symbol of democracy in Turkey. Moreover, he was cleared from all accusations in the end (Arcayürek, p. 173).

The rest of the book consists of interviews with Ecevit and more contemporary political developments concerning Ecevit after the 12 September 1980 military coup. Now, I want to make a critical analysis of Arcayürek’s book and Ecevit’s political life during the pre-12 September (1980) period. First of all, as I stated before, Arcayürek was a close friend of Ecevit and a Kemalist-social democratic journalist which could have prevented him to be completely objective in his writings. However, he seems to be objective at least on concrete events. Secondly, Arcayürek’s book is very beneficial, but it is a journalistic book lacking political theory and macro explanations for international relations and economic performance of the country. Since Arcayürek is not a university Professor, we should read the book as a journalistic book lacking qualified information and theory. Thirdly, although the book consists of memoirs, few observations were made on Ecevit’s personality and psychological situation. That is why, the book could have written in a better way if a psycho-political dimension was added to Ecevit observations. But still, as far as I am concerned, this book is very beneficial for a Political Science student in order to learn more about Turkish political history and the development of social democratic movement in Turkey. All important events were recorded and were told by showing some witnesses and sources. That is why, Arcayürek’s book is an example of successful professional journalism that we do not see often today in Turkey.

If we look at Ecevit’s political life after the 12 September coup on the other hand, we could claim that he became a much more pragmatic and liberal and got rid of his socialist ideals of the 1970s. Ecevit could have done many mistakes in the past, but for me one thing was certain; we will absolutely miss his kindness and humbleness especially when we look at today’s politicians. Rest in peace Karaoğlan…