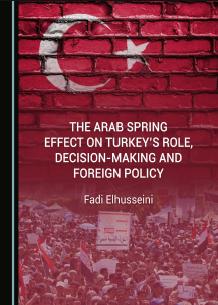 The book analyzes Turkey’s role in the Arab world and investigates the effects of the Arab Spring on Turkish foreign policy, decision-making and its role. Particular attention is focused on widespread terms such as strategic depth, neo-Ottomans and the Turkish Model. It also provides incisive discussions of the key tenets of the Turkish official responses to Arab revolts and narrates the advantages and challenges that come to forge any potential regional role for Turkey.

Fadi Elhusseini is a Senior Fellow at the Centre on Governance at the University of Ottawa, Canada. He is a political and media consultant and an advisory board member of the New Arab Foundation. He received a BA in Economics and Political Science from Cairo University, Egypt and an MA in International Commerce from Lecce, Italy. He obtained his PhD in International Studies at the University of Sunderland, UK. His research interests include Arab and Islamic studies, the Middle East peace process, Turkish and Middle Eastern studies and theories of international relations. His publications include contributions to Turkish Foreign Policy in the New Millennium and Turkish Studies from Different Perspectives.