Turkey will have parliamentary and Presidential election on June 24, 2018. I already tried to analyze these elections in May; but since new developments have been taking place in Turkey, a new analysis is necessary. In this piece, I will try to summarize the most recent political developments taking place in Turkey and analyze Turkish elections. However, since there is still two weeks period before the elections and Turkey is a country where everything could change in a few days, I think we should be cautious about electoral predictions.

Following my last analysis, the most important political development in Turkey was the sudden devaluation of Turkish lira against foreign currencies such as dollar, pound and euro. During the month of May, Turkish lira began to quickly lose value against foreign currencies and President Erdoğan’s insistence on low interest rates and political involvement into the affairs of Turkish Central Bank became a matter of criticism. Although President Erdoğan and his Deputy Prime Minister and former Minister of Finance Mr. Mehmet Şimşek later tried to give confidence to international investors and Turkish public with their statements and Britain visits, Turkish lira reached the historic low against dollar during May. During this nightmare period, dollar passed 4.90 and euro reached 5.74 Turkish lira.[1] Although during the last week Turkish lira recovered, interest rates in Turkey are now very high (fourth highest in the world) with 17.75 % and economic indicators are not that bright.[2] Nowadays, euro is around 5.24 and dollar is reduced to 4.45 lira.[3] It is a fact that economic problems seriously affect voting behavior in all countries including Turkey. It should not be forgotten that Erdoğan and his party AKP (Justice and Development Party) came to power after the huge economic crisis Turkey had in 2001. So, although the latest public poll made by SONAR Company still suggests that Mr. Erdoğan has 48.30 % support[4], it is almost certain now that Erdoğan will not be able to win the Presidency in the first round because of this economic shock. On the other hand, Erdoğan’s personal advisor Mehmet Uçum recently stated that there might be a new election following June 24 elections if Mr. Erdoğan wins the Presidency, but loses the majority in the parliament.[5] 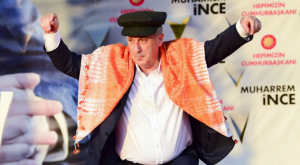 The second most important change during the last month was the unexpectedly good performance of pro-secular CHP’s (Republican People’s Party) Presidential candidate Muharrem İnce. Mr. İnce was already known as a great debater, but his extraordinary performance during the last month (so far he has organized more meetings than all other Presidential candidates) increased his votes rapidly. Although CHP normally has maximum 24-25 % votes due to historical reasons and political cleavages in Turkey, Mr. İnce was able to reach 31.40 % with his personal skills according to latest polls.[6] Mr. İnce was not only able to gain votes his party lost to new center-right Good Party (İYİ Parti), but also took extra votes from nationalist and conservative voters. Mr. İnce makes enormous efforts to embrace all segments in Turkey; although he is a secular person, he goes to historic mosques and publicly prays[7] in order to prove Islamist voters that he is a good Muslim like Erdoğan. He also does his best and uses a soft rhetoric for not alienating Kurds or Turkish nationalists. He recently visited former Turkish President and populist right-wing politician Süleyman Demirel’s right-arm and close associate Mr. Hüsamettin Cindoruk as well. Cindoruk described Muharrem İnce as “Turkey’s Emmanuel Macron” although these two come from very different political backgrounds.[8] According to political analyst Dr. Gülfem Saydan Sanver, Muharrem İnce is by far the best candidate with his speed, brave speeches and his courageous visit to pro-Kurdish Presidential candidate Selahattin Demirtaş in prison in order to show his commitment to democracy.[9] Similar to Erdoğan’s initial years, Muharrem İnce also uses slogans in order to make Turkish people believing into his cause. He talks about 3 “b”s: “barışacağız” (we will make peace), “büyüyeceğiz” (we will grow economically) and “bölüşeceğiz” (we will share it equally).[10] He also talks about 3 “y”s to make this happen: “yön” (direction will be Europe), “yöntem” (method will be democracy) and “yönetim” (government will consist of a team of experts instead of one-man rule).[11] Although SONAR’s latest poll shows that İnce will lose the election to Erdoğan in the second round with 53.7 % (Erdoğan) against 46.3 %[12], if in the first round Mr. Erdoğan’s party and electoral coalition – Cumhur İttifakı (together with Turkish nationalists MHP, BBP and pro-Islamic and pro-Kurdish HÜDAPar) loses the majority to Millet İttifakı (electoral coalition between CHP, İYİ Parti, Saadet Partisi and DP), I think anything could happen in the second round. As far as I am concerned, Mr. İnce could still win the Presidency since almost all secular Kurds (HDP) and large groups of secular nationalists (İYİ Parti) will vote for him in the second round.

Finally, although Mr. Erdoğan is still the favorite of these elections, I can say that anything could happen in Turkey right now. Since Mr. Erdoğan and his party, after 15-16 years of government, are now tired and distressed, a new and popular candidate such as Muharrem İnce could have a chance this time against Erdoğan. But Erdoğan’s victory also should not surprise anyone due to the dense effect of Islam in Turkish society as a mobilizing and political force.