Turkey’s local elections will take place on March 31, 2019 in 81 Turkish cities (30 of them are metropolitan cities). Elections will serve as a test for assessing the popularity of long-time ruling Justice and Development Party-AK Parti (since 2002) and its charismatic leader President Recep Tayyip Erdoğan (since 2003). AK Parti and Mr. Erdoğan had some problems in recent years due to Turkey’s economic slowdown and political problems related to Syrian civil war. Turkey hosts more than 3 million Syrian refugees, which obviously has some negative effects over the economy. Moreover, PKK-affiliated Kurdish groups’ (PYG and YPG) political gains during the Syrian civil war increases nationalist reactions in the country in recent months. Nowadays, President Erdoğan signals a military operation to the eastern part of Euphrates River in order to eliminate Kurdish groups which Turkey considers as terrorists. A limited and successful military operation into Syria might secure another easy victory to President Erdoğan on the eve of local elections since Mr. Erdoğan is a par excellence populist who could easily convince Turkish voters to choose his party’s candidates for the sake of country. Moreover, recent news about American removal from Syria might encourage Turkey to expand its military presence in Syria. However, a military confrontation between Turkish and American soldiers in Syrian soil and high number of martyrs might lead to a serious political crisis and weaken President Erdoğan and his party’s hand before the elections. So, Turkey’s 2019 local elections will take place in the shadow of Syrian crisis and its spillover effects over Turkish-American relations and the Kurdish Question. 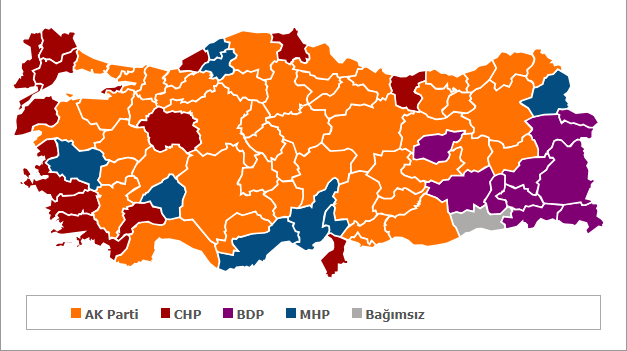 Following its successful performance in these local elections, AK Parti had a narrow squeak win in the controversial constitutional referendum (51.41 % against 48.59 %) in 2017, which allowed President Erdoğan to install a new system of Executive Presidentialism by sweeping all elements of opposition within the state apparatus. On June 24, 2018, President Erdoğan clinched another victory by getting 52.60 % of the votes and secured his seat as the President in this new system for another 5 years against CHP deputy Muharrem İnce who took 30.60 % of the votes as the candidate of the “Millet İttifakı” (Nation Alliance); an electoral alliance consisted of CHP, newly established (in 2017) center-right and secular Turkish nationalist Good Party (İyi Parti), Islamist Felicity Party (Saadet Partisi) and center-right Democrat Party (Demokrat Parti). Mr. Erdoğan was able to take this relatively easy victory thanks to AK Parti’s electoral coalition with Turkish nationalist MHP and Turkish nationalist-Islamist BBP (Great Unity Party-Büyük Birlik Partisi), which is named as “Cumhur İttifakı” (People’s Alliance). Simultaneously with the Presidential election, a parliamentary election was made on June 24, 2018 in Turkey and AK Parti took 42.60 % of the votes. CHP had got 22,60 % of the votes and became the second party once again. Pro-Kurdish Peoples’ Democratic Party (HDP) took 11.70 % of the votes and became the third party, whereas MHP had got 11.10 % of the total votes and thus, ranking the fourth. The newly established secular right-wing Good Party (İyi Parti) entered into election for the first time and took 10 % of the votes, a considerable success for a new party.

Before the elections, all political commentators and journalists in Turkey try to confirm AK Parti’s and CHP’s candidates especially in 3 biggest cities of Turkey: İstanbul, Ankara and İzmir. Although it is not officially announced yet, according to backstage information, AK Parti’s İstanbul candidate will be former (and the last in Turkish political history) Prime Minister Mr. Binali Yıldırım. Yıldırım for long years served as Turkey’s Minister of Transport, Maritime and Communications and was a losing candidate for his party in 2014 local elections from İzmir. Later, he served as AK Parti’s Chairman and Prime Minister between 2016-2018. He is an experienced politician not taking too much criticism from CHP circles and he was chosen deliberately in order to solve İstanbul’s traffic jam problem. While Turkish press was expecting Muharrem İnce to be CHP’s İstanbul candidate due to his relative success in the Presidential election against Erdoğan, CHP leader Mr. Kemal Kılıçdaroğlu made an interesting choice and picked young governor of Beylikdüzü (one of the fastest growing districts of İstanbul) Mr. Ekrem İmamoğlu as his party’s İstanbul candidate. İmamoğlu is often praised with his success in Beylikdüzü municipality; but since he is not known by most of the İstanbul residents, his chance seems relatively low. İmamoğlu will try to take advantage of his youth and success at municipal affairs in order to convince voters. Binali Yıldırım on the other hand will take advantage of his reputation and experience. In İstanbul, unless an incredible campaign is prepared by CHP, it seems like Binali Yıldırım will win the election. However, the negative effects of Turkey’s economic slowdown in recent months and the terrible costs of Syrian crisis might reduce Yıldırım’s support. In 2014, AK Parti candidate Mr. Kadir Topbaş won the race in İstanbul with 47.9 % of the votes against CHP candidate Mustafa Sarıgül’s all-time high support of 40.1 %. Since Sarıgül was a very popular name, İmamoğlu might have less support than him this time. However, knowing this, CHP made an electoral coalition (Millet İttifakı) once again with İyi Parti and this party will support CHP candidates in most populated metropolitan cities like İstanbul, Ankara, İzmir, Antalya, Bursa, Adana, Aydın, Muğla, Tekirdağ, İzmir and Eskişehir. In return, CHP will support İyi Parti candidates in other cities such as Balıkesir, Denizli, Manisa, Kocaeli, Konya, Samsun, Trabzon, Kayseri, Sakarya and Gaziantep. Similarly, AK Parti also decided to keep “Cumhur İttifakı” electoral alliance with MHP. According to agreement, MHP will support AK Parti’s candidates in biggest metropolitan cities like İstanbul, Ankara and İzmir and AK Parti will support MHP’s candidates in some important cities such as Adana, Mersin and Manisa. There are still negotiations going on between President Erdoğan and MHP leader Mr. Devlet Bahçeli and probably the electoral coalition will include many other cities as well. In İstanbul, in the 2018 Presidential election, Mr. Erdoğan took 50 % of the total votes against Muharrem İnce’s 38.89 %. In terms of parliamentary election, “Cumhur İttifakı” (AK Parti-MHP-BBP) took 50.68 % of the votes, whereas “Millet İttifakı” (CHP-İyi Parti-SP-DP) took 36.34 %. So, closing the gap of 14 % with the governing party seems like a really difficult job to do for young Ekrem İmamoğlu. However, İmamoğlu seems to be a bright candidate who has great potential with a good political campaign. In addition, in terms of districts, 2014 local elections results show that there might be a tight race in Avcılar (CHP: 44, AK Parti: 40.9), Büyükçekmece (CHP: 47.6, AK Parti: 44.9), Kartal (CHP: 44.9, AK Parti: 42.8) and Üsküdar (AK Parti: 45.6, CHP: 43.1).

In Ankara, President Erdoğan chose former Minister of Environment and Urban Planning (2016-2018) and Kayseri municipal leader (between 1998 and 2015 he was elected 4 times in row) Mr. Mehmet Özhaseki as his party’s candidate in order to replace long-time serving Melih Gökçek. Özhaseki is a good choice for AK Parti since he represents an -alternative- Islamist modernization and urbanization model with his good work at Kayseri. However, due to Melih Gökçek’s strong personal support in Ankara and Özhaseki’s identification with the city of Kayseri instead of Ankara, things might be more very difficult for AK Parti this time. Moreover, CHP has a very good candidate coming from Turkish nationalist (MHP) background in Ankara: Mr. Mansur Yavaş. Yavaş lost the municipal race against Gökçek in 2014 with only 1 % of the total votes in a very controversial manner (electricity was cut off in some Ankara districts during the counting of the votes). He showed an excellent performance prior to this in Beypazarı municipality and turned this underdeveloped and rural Ankara district into a touristic urban place. Due to his professional success and nationalist background, Yavaş will probably take full support from İyi Parti voters and could convince many MHP voters as well. In the 2018 Presidential election, Mr. Erdoğan took 51.5 % in Ankara, whereas Muharrem İnce took 36.2 %. In the parliamentary election on the other hand, Cumhur İttifakı took 53.5 % of the votes against Millet İttifakı’s 39.7 %. Although there is a 13-14 points gap between two sides, Mansur Yavaş could be a game-changer and win the election this time. This is because MHP tradition and Turkish nationalism are much stronger in Ankara compared to İstanbul and MHP voters could prefer secular nationalist Yavaş to Islamist nationalist Özhaseki. That is why, I think the most competitive and interesting election will take place in Ankara.

In İzmir, a city where historically secular opposition (CHP tradition) is very strong, AK Parti decided to chose former Minister of Economy (2013-2015, 2016-2018) and Denizli municipal leader (2004-2011) Mr. Nihat Zeybekçi as its candidate. Zeybekçi was chosen consciously as a secular conservative since AK Parti strategists did not want to spread fear to voters in İzmir. Although CHP candidate is not officially announced yet, after the retirement of Aziz Kocaoğlu, CHP might prefer Selin Sayek Böke, former Bilkent University Economics Professor and CHP İzmir deputy. Böke represents modern Turkish women and was subjected to hate speeches made by radical Islamist circles due to Christian members within her family although she is herself a secular Muslim. In the last local election in 2014, CHP won a landslide victory with Aziz Kocaoğlu’s 49.6 % against Binali Yıldırım’s 35.9 %. In İzmir, CHP still seems very solid and comfortable. Böke might even increase her party’s votes and force 60 % since voters in İzmir are not happy of AK Parti government’s Islamist-authoritarian policies as well as its economic performance. On the other hand, successful governor of Seferihisar Mr. Tunç Soyer could be a surprise candidate for CHP in İzmir and he could do as good as Böke will do. Soyer was able to transform Seferihisar into a real success story as a cittaslow city in the last few years, but similar to İmamoğlu, his lack of reputation is a major problem. In that sense, Böke seems to have much higher chances compared to Soyer. In any case, CHP will have an easy victory in İzmir as usual.

Tunç Soyer could be a surprise candidate for CHP in İzmir

Lastly, if we look at the general picture, I think conditions are not very optimistic for the opposition. Despite of Turkey’s all economic and political problems, AK Parti-MHP electoral coalition seems very strong three months before the election. This is related to historical-cultural reasons in Turkey (historical opposition to the Jacobin modernization tradition of CHP and strong Islamist tendencies of pious masses) as well as President Erdoğan’s strong leadership. So far, CHP leader Kemal Kılıçdaroğlu’s efforts to overcome this historical dichotomy between secular and pious groups did not work and Erdoğan was able to take advantage of his politician skills every time by using a populist rhetoric in order to demonize CHP and direct people to vote for their lifestyles and cultural codes instead of the performance of the government or the quality of the projects presented by different political parties. This election does not seem very different than previous ones and as far as I am concerned, there will not be big changes in terms of results. However, a serious political crisis with the United States due to Syrian Kurds or the deepening of the economic crisis (as in the case of sudden devaluation of Turkish lira against US dollar and euro few months ago) before the election could change the equilibrium. According to Adil Gür, the owner of A&G, a prestigious gallup poll company in Turkey, this time local elections will be very competitive and there will be only a few points differences between two electoral coalitions.[1] Gür also claims that in İstanbul and Ankara, AK Parti candidates are ahead of CHP candidates for the moment. Finally, Turkey will have hot days by the early Spring in 2019 due to local elections, but no big change is expected. However, in Ankara and İstanbul, it seems like the race will be closer this time and the hopes of the opposition parties (mainly CHP) will increase for the next election. Especially a surprise CHP victory in Ankara might change the whole political atmosphere in the country.