Dr. Beata Piskorska teaches International Relations courses at John Paul II Catholic University of Lublin in Poland. She is an expert of European Union especially in terms of EU’s Eastern Neighborhood Policy. Piskorska had some courses and a seminar last week in Istanbul Gedik University as part of Erasmus+ mobility program.

Dr. Ozan Örmeci: Dr. Beata Piskorska, congratulations for your courses and seminar in Istanbul Gedik University. We were delighted by your knowledge and warm personality. During your seminar, you explained EU’s “soft power” abilities as part of ENP with a particular focus on Caucasian region. You also argued that EU’s “soft power” instruments do not work efficiently in recent years due to Russian aggression and the general trend of returning to the “hard power” in the world. You also presented some statistics about democratic regression in EU’s neighbouring countries. Could you elaborate on democratic trends in EU’s eastern neighbours in recent years?

Dr. Beata Piskorska: Dr. Ozan Örmeci, I would like to express my great gratitude for ability to come to Istanbul Gedik University and my participation in valuable meetings and discussions with university staff and students. It was a really significant experience to share of my interest, knowledge and experience as a Polish university teacher interested in EU research. Additionally, I am very grateful for perfectly organized and very interesting seminar of the EU’s role in international relations. It was a great opportunity to discuss the most recent political developments concerning EU and the future of security and defence policy of this organization.

As I presented during the seminar, soft power is treated as a main instrument of the EU policy towards the neighbourhood region in the Southern and Eastern Europe realized by European Neighbourhood Policy (ENP) and the Eastern Partnership (EaP) as a part of it. By these two initiatives, the EU attempts to play the role of influential actor, being able to change the way of thinking and democratize states in the region. Because of the lack of well-functioning hard power, the EU uses primarily of non-power instruments in order to strengthen political and economic cooperation with them. These soft instruments are: association agreements, DCFTAs, financial support, public diplomacy (scholarships, student exchange, trainings), support for governments, civil society and democracy and civilian missions, without offering them membership perspective. Lack of this possibility may not be motivated for beneficiary countries to undertake domestic reforms.

Actually, I argued pessimistically on the basis of several statistics that prove that, ten years after the launch of the Eastern Partnership, the EU’s strategy of soft power doesn’t work effectively in the promotion of democracy and economic development in partner countries. There are several problems regarding the ENP that prevent it from becoming an effective instrument to help the EU to achieve its aim of norm promotion: political situation in the closest neighbourhood and the rising imperial competition coming from Russia who uses hard power instruments towards the region and tries to contain the EU’s soft power in the shared neighbourhood. However, the outbreak of Ukraine-Russia war in 2013 and the annexation of Crimea by Russia in 2014 became a turning point for the EU’s soft power policy. Since then, the EU has had to deal with the geopolitical collision with the Russian Federation and its aggressive military policy in the so called “near abroad”. It needs to stress that the hard security issues related to resolving regional conflicts (Ukraine-Russia, Nagorno-Karabakh, Abkhazia, South Ossetia and Transnistria-Transdniestria) are not included into the agenda of ENP. Therefore, the EU’s influence by using soft power instruments into this region is not a successful response to the security challenges in the Eastern neighbourhood. That is why, it needs to emphasize that without deeper involvement in conflict resolution there, the EU will not be able to achieve its own interests in the Eastern neighbourhood.

Coming back to the issue of democratic trends in EU’s eastern neighbours in recent years, we can observe that democratic political and economic changes in the post-Soviet space are carried out very slowly and insignificantly. According to rankings presented by me during the seminar, there is a decrease of almost all countries’ democracy score within last ten years since the creation of EaP (Eastern Partnership) initiative. It is visible mainly in case of Armenia and Azerbaijan. In case of Ukraine, we see a slight decrease in terms of level of democracy. Regarding the Corruption Perception Index in 2008-2018, the worse indicators can be found in three countries: Azerbaijan, Belarus and Moldova. Considering the general level of freedom according to the Freedom in the World 2018, political situation in post-Soviet countries hasn’t changed significantly for ten years. Deterioration has taken place only in case of Ukraine – has changed from free to partly free, level of freedom in the remaining five countries is the same (Moldova, Georgia and Armenia are identified still as partly free). The worst level of freedom is noticed in two countries: Azerbaijan and Belarus (they are defined as autocratic regimes). It means that the EU is currently unable to promote democracy in partner countries. I think the main reason of this is the lack of an EU membership incentive/perspective, which also weakens the motivation and the power of politicians in neighboring countries to make the necessary reforms. 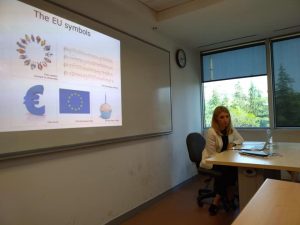 Dr. Beata Piskorska during a lecture in Istanbul Gedik University

Dr. Ozan Örmeci: There are critical news in recent years in the international press about the democratic situation of some European countries including Hungary and Poland. How do you see the democratic development of these countries?

Dr. Beata Piskorska: Actually, in many EU countries democracy and the rule of law are under pressure. We can observe this tendency considering the general level of freedom according to most popular statistics agency. According to the Freedom House ranking (Freedom in the World 2018), democratic freedoms are falling within last 12 years. Three out of 28 EU countries (Hungary, Bulgaria and Romania) are categorized in the ‘partly free’ countries. Unfortunately, in Poland (currently a “free country”) also, the Freedom House analysts have noticed, in recent years, the politicization of courts and public media. Alarmingly, governments of Hungary and Poland have recently witnessed constitutional changes; accumulating more power for governments and limiting the independence of the courts and the freedom of the media. In both countries, after winning the elections, Viktor Orbán (leader of Fidesz) and Jaroslaw Kaczyński and his Law and Justice Party – PiS (which was successful in the parliamentary elections of October 2015) immediately set out to create proper conditions for the consolidation of their power through rewriting the fundamental rules of liberal democracies. The core idea of their anti-democratic agenda was to efficiently neutralize all forms of internal resistance, starting with the highest level of institutional control, the Constitutional Court, followed by the broadly understood justice system. The significant developments that have occurred in Poland and Hungary attract international attention and provoke the question of whether the politics of Eastern Europe is being fundamentally altered, and the democratic achievements of the region reversed. In case of Poland, the European Commission has launched the procedure of article 7 of the Treaty on EU for breaking rule of law after conducting a dialogue for almost two years. It is particularly sad for the state, which was the model of democratic change 20 years ago. 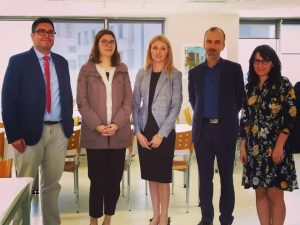 Dr. Ozan Örmeci: Right-wing populism has become an influential political wave in many European countries. Most recently, we have witnessed the entry of Vox Party into the Spanish Parliament. What do you think about the reasons of the rise of right-wing populism in Europe?

Dr. Beata Piskorska: There is no easy answer to this question. Recent academic studies have shown that throughout the western world right-wing populism are widespread. Parties of this type across Europe takes different forms depending on nationally specific factors such as political history, system and culture, but there are similarities. They are in government in 11 European countries. More than a quarter of Europeans voted populists in their last elections. In my opinion, the main reason for the increase in support these groups with ultra-nationalist views is arising anti-immigrant, Islamophobic and antisemitic sentiments, and exploiting public anger over austerity and the perceived ‘arrogance’ of the Brussels political class. The populists aim to reassert the pre-eminence of national identity, narrowly defined, and to stop the European project in its integrationist tracks. Alarmingly, across the EU countries, far-right populists and ultra-nationalist parties are mobilising ahead of upcoming this month’s EU parliamentary elections. Polls show their support growing. 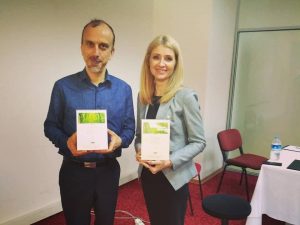 Dr. Ozan Örmeci: You were in the Turkey almost for a week few days ago. What were your observations about Turkey and Turkish people? What do you think about Turkish accession to EU?

Dr. Beata Piskorska: I have been in Turkey for the third time and always visit Turkey with pleasure. During my stay, I had chance to observe daily life of ordinary people in the streets and I was surprised that this country and especially Istanbul has developed well mainly on the Asian side. I am extremely impressed by the high level of learning at university, the students’ interest in European affairs and a very warm attitude from the academic staff.

Regarding opportunities of Turkey’s accession to the EU, this country is still a candidate with a long-standing association agreements. Turkey applied for the EU membership in 1987.  It is known that due to Turkey’s geographical location and political history, the EU hesitated for a long time before accepting its application. Although accession negotiations finally began in October 2005, some EU leaders have expressed doubts as to whether Turkey will or should become a member of the European Union. One of these leaders is current French President Emmanuel Macron, who stressed last year that there is no chance of progress towards Turkey joining the European Union at present, but it is important to keep a close relationship with Turkey and offer other options at the moment – a partnership. This would not be a sufficient offer especially for Turkish society that wants full access to the EU. Nonetheless, the EU intends to remain a reference point for Turkey in relation to political reforms and fundamental rights because of President Erdoğan’s rule and restriction of human rights. As we know (also in Poland), the respect for European values remains a non-negotiable condition for accession.

Dr. Ozan Örmeci: Dr. Beata Piskorska, thank you for your time and good luck in your studies.