Some experts are alleging that Azerbaijan-European Union relations experience tough times and that Brussels even hesitates to recognize Azerbaijan’s territorial integrity. But Donald Tusk’s visit to the region clarified the situation. His remarks refuted the provocative allegations. Donald Tusk described the EU’s relations with Azerbaijan as strategic and very important. Brussels recognizes Azerbaijan as a powerful state and the leader of the South Caucasus. This shows that the relationship with Baku influences greatly the geopolitical picture of the region. Azerbaijani President Ilham Aliyev confirmed this following his meeting with Donald Tusk. This article will highlight the geopolitical importance of Donald Tusk’s visit to Azerbaijan.

Harmony of two aspects: Azerbaijan as an independent state and South Caucasus leader

Anti-Azerbaijani forces and Armenian lobby are making unfounded allegations regarding the relationship between the European Union and Azerbaijan. They even claim that there is serious disagreement between the country and the organization. But these allegations are usually dashed after visits of official representatives. This time President of the European Council Donald Tusk’s visit to the region exposed their lies.

First of all, it should be mentioned that it is Donald Tusk’s second visit to Azerbaijan in the capacity of President of the European Council. His term is now expiring and, in fact, it was a farewell visit, which aimed to assess the nature of the European Union’s relations with independent states.

President Ilham Aliyev’s talks with Donald Tusk in Baku are of vital importance. What is obvious is that Azerbaijan is a strategically important country for the European Union in the South Caucasus. There is no second country in the region with which the EU enjoys such broad and deep relations. Azerbaijan’s relationship with Brussels is clearly manifested in the implementation of concrete programs. There are no empty promises or words. For example, although Donald Tusk has a good attitude towards Armenians (in some cases he even seems to be pro-Armenian), there are no practical moves. Before Nikol Pashinyan’s coming to power, Armenia’s relationship with the European Union was confined to general words and allocation of pittance. But Pashinyan added geopolitical controversies to all this.

The situation with Azerbaijan is completely different: the EU is building relations with the country, which pursues an independent policy and enjoys an image of a reliable partner. Brussels treats Baku as a real partner. This is the essence of the issue. President Ilham Aliyev emphasized this during his meeting with Donald Tusk: ”Today during our tête-à-tête meeting and meeting with delegations we discussed broad range of issues of our bilateral cooperation, regional development, regional security. We discussed ongoing negotiations between European Commission and Azerbaijan on new agreement.”

Azerbaijan’s close partnership with the European Union on issues of regional development and security is based on the implementation of concrete programs. They are initiated by both Brussels and Baku. That is why, the European Union treats Azerbaijan as one of the key partners in ensuring energy security. From this point of view, the negotiations between the European Commission and Azerbaijan, which the head of state underlined during the meeting, is particularly significant. The President said: ”We discussed ongoing negotiations between European Commission and Azerbaijan on new agreement. We express views on future prospects for negotiations. The negotiations continue successfully. Many issues have been already resolved and we are working now on remaining issues in the spirit of good partnership.”

vEU-Azerbaijan relationship is built on strong foundations. The worsening of this relationship is out of question. On the contrary, Brussels wants to enrich and make it long-term, which is manifested in the work on the strategic cooperation document proposed by Baku.

From this point of view, the adoption of the Partnership Priorities document between the EU and Azerbaijan on July 11, 2018, draws particular attention. Ilham Aliyev put special emphasis on this issue after his meeting with Donald Tusk. The President said: ”This is a very important document. It expresses support to territorial integrity, sovereignty and inviolability of borders of Azerbaijan.” The stance is quite clear: the EU officially recognizes Azerbaijan’s territorial integrity, sovereignty and inviolability of borders as key priorities of its relations with the country.

It is a response to those who invent allegations in order to cast shadow on EU-Azerbaijan relations. They came up with an absurd idea that the EU does not want to recognize Azerbaijan’s territorial integrity. And now President Ilham Aliyev put an end to the issue because if a documentthat officially received a priority status affirms support for territorial integrity, sovereignty and inviolability of borders, then it is a law for the European Union. Breaking it is impossible. Otherwise it will result in the collapse of the EU. 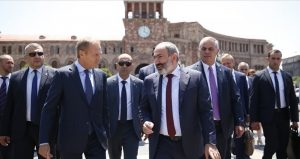 In fact, Donald Tusk confirmed these views. In Yerevan too, he openly declared that the Armenia-Azerbaijan Nagorno-Karabakh conflict had to be solved in accordance with international law and demands of the Helsinki Final Act. This means that Donald Tusk’s approach to the problem is based on the EU’s political, ideological and legal values. The President of the European Council said in Baku: ”Azerbaijan is unique. It combines tradition and modernity. You look both to the East and to the West, thanks to your strategic location in today’s complex geopolitical landscape. And as I have said before, Mister President, the EU supports Azerbaijan’s sovereignty, independence and territorial integrity.”

Everything is clear here: Donald Tusk’s attitude is in line with the Partnership Priorities document adopted between the EU and Azerbaijan. He highlighted prospects for relations with Azerbaijan in the context of the priorities set in 2018: ”The EU and Azerbaijan come closer to each other every year. Our relations have intensified and my visit today is another clear sign of this. In 2018, we adopted priorities for our partnership, and our negotiations on a Common Aviation Area Agreement, as well as on the new EU-Azerbaijan agreement, are close to completion. Our economies will profit from them, and our political, business and cultural relations will deepen.”

Donald Tusk also emphasized energy and transport projects that are of crucial importance both to the country and the organization. In addition, he almost echoed President Ilham Aliyev’s views on the settlement of the Armenia-Azerbaijan Nagorno-Karabakh conflict. Baku and Brussels underlined the importance of solving the problem within the framework of Azerbaijan’s territorial integrity in accordance with international law.

The visit of the President of the European Council to Azerbaijan was therefore important from two perspectives. Firstly, it confirmed Brussel`s interest in solving the Armenia-Azerbaijan conflict in line with international legal norms. Secondly, Brussels fully realizes the strategic nature of its relationship with Azerbaijan and takes concrete steps to develop it. The EU hopes that ”this positive momentum should bring our partnership to a higher level, directly benefit all our people, and accompany Azerbaijan’s own reform processes and economic diversification”. No comment here…