Dr. Mher Sahakyan is focusing his research on International Security issues and China’s foreign policy. He completed his PhD at Nanjing University in China. Dr. Sahakyan is currently heading the “China-Eurasia” Council for Political and Strategic Research Foundation. He is a member of British Association of Chinese Studies. Recently he has published “China’s Belt and Road Initiative and Armenia” book in Armenian and Russian languages.

Dr. Ozan Örmeci: Dr. Sahakyan, you were in Turkey last week for an informative conference on China’s Belt and Road Initiative (BRI) organized by Istanbul Gedik University and Lanzhou University. Could you please elaborate your views on the geopolitical significance of BRI?

Dr. Mher Sahakyan:  The Chinese side is trying to become an independent politico-economic pole in the world. This means that China will try to transform from a regional power into a geopolitical power, which will give it opportunities to strengthen its security and stimulate economic development. For successful implementation of this roadmap, which will bring economic development and improvement to national security, China is trying to use the BRI initiative, which consists of the Silk Road Economic Belt and the 21st Century Maritime Silk Road.

It can be argued that by implementing its BRI, China is, step by step, strengthening its role on the global arena and increasing its influence. The main argument for this hypothesis is the second BRI Forum, which took place in April 2019, during which Beijing became the main stage for international relations, as heads of many states and international organizations were present there. China’s pivot towards Eurasian continent with its Belt and Road initiative as well as harmonization perspectives of Eurasian Economic Union and Belt and Road Initiatives are changing modern Eurasian economics and political order. Along with the growing exchanges between China and Eurasia, China’s influence in Contemporary Eurasian mainland is continuously increasing. 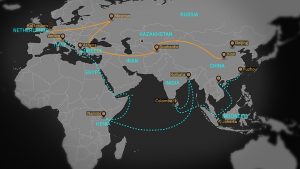 Dr. Ozan Örmeci: Dr. Sahakyan, you are expert on China. How do you explain the rise of China in the last few decades? Do you think this economy-based rise will eventually lead to political consequences and Chinese model of governance will be more influential in the world?

Dr. Mher Sahakyan: It is not a secret that 41 years ago China started to implement reforms, which transferred its economy from Stalinist style to modern semi-liberal, semi-capitalist style economy with Chinese characteristics. In this relatively short time, Chinese side succeeded in implementing the so called “The Four modernization goals” and successfully developed agriculture, industry, defense, science and technology. I do believe that one of the main reasons of China’s success is that that this country spends huge amount of money on research and development, already several decades it connects the results of science with economy, as a result, this policy is strengthening Chinese economy and Chinese universities. Yes, sure, economic influence in different regions will give it also political influence, and we see this kind of developments already in Central Asia, Eastern Europe, South Eastern Asia etc. As Russian saying goes, “Who pays money, consequently he/she orders music.” China is a young superpower, which has its own way of behavior and it mostly spreads its influence through economy and nowadays the Belt and Road Initiative is the main tool for it. 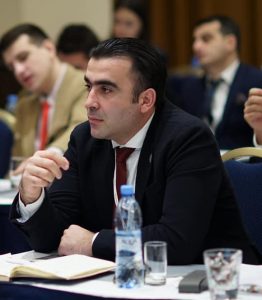 Dr. Mher Sahakyan during a conference

Dr. Ozan Örmeci: Dr. Sahakyan, as an Armenian academic, how do you assess current tensions in the South Caucasia?

Dr. Mher Sahakyan: I strongly believe that, the current situation in South Caucasus cannot satisfy normal people who live in this region. As Chinese saying goes, “The interests to be considered should be the interests of all.” What we need it is dialogue among nations, tolerance and peace-building. If different regional states really want to develop their economy, it can be done only in peace. Less problems in the region will also bring less interference from the outside.

Dr. Ozan Örmeci: Turkey’s current government took high risks few years ago and signed a protocol with Armenia for the normalization of bilateral relations. However, no improvement could be achieved afterwards due to reactions coming from people in both countries. How do you see the future of Turkish-Armenian relations?

Dr. Mher Sahakyan: Yes, we have many problems, but we have many common things and interests as well, as we live in the same region and in the same world. So, improving the current not satisfactory situation can be done only, if two sides start direct negotiations without any preconditions. It is also worth mentioning that two sides must improve and develop their relations without letting the other (third) parts to impose their own will and take hostage Turkish-Armenian relations. The best beginning can stand the restart of direct economic relations. Actually, this kind of activities exist among the representatives of the two nations; they trade with each other now as well, but they do it through the territory or documents of the other countries, for which Turkish and Armenian businessmen lose money. Now we have also direct flights and it is very easy for Turkish citizens to get Armenian visa and for Armenian citizens to get Turkish visa… So, closed border is not making such a big effect as it was 30 years ago. In the era of digitalization and social networks, people can interact with each other without even passing borders. Closed borders provide only some kind of influence and leverage to other countries which tries to play on current bad relations between Turkey and Armenia for their own benefit. In the future, I hope to see peaceful coexistence in our region, where we and our children can live in peace and harmony and it is possible.

Dr. Ozan Örmeci: Thank you for this interview. Hope to see you again in Turkey for new conferences.

Dr. Mher Sahakyan: Dear Dr. Ozan Örmeci, it was my honor and thank you for the very interesting discussion. I hope to see you and other Turkish colleagues in Armenia as well. Let’s keep contact and strengthen cooperation as well. Thanks go to Istanbul Gedik University for the invitation.