Turkish Republic of Northern Cyprus (TRNC), the country of Turkish Cypriots that was established in 1983 and so far recognized only by Turkey, will have the first round of its 10th Presidential election on April 26, 2020. According to TRNC electoral law, a Presidential candidate must garner more than 50 % of the total votes in the first round in order to be elected. Since this is not expected for this election, the second round of the Presidential election will be organized on May 3, 2020. The election will help Turkish Cypriots to improve their democratic regime and increase their support for their unrecognized state. Free and fair elections taking place in Muslim dominated countries are also important for democratization of the Islamic world, since in the last years, except for Tunisia, democracy is in a downward trend in the whole world and especially in Muslim dominated countries. In addition, TRNC is a semi-Presidential regime similar to France, and the post of President of the Republic has important executive duties such as conducting Cyprus negotiations. Thus, Presidential elections are always important in TRNC. In this piece, I am going to analyze 2020 TRNC Presidential election.

The fifth Presidential election in 1995 was important for being the first election to be finalized in the second round. This time, Rauf Denktaş was an independent candidate and UBP’s Presidential candidate was Dr. Derviş Eroğlu, another important local figure among Turkish Cypriots. Denktaş defeated Eroğlu in the second round and kept his post for another 5 years. In the 2000 election, Denktaş was not able to defeat UBP’s Eroğlu in the first round once again. However, before the second round, Eroğlu decided to withdraw from the contest. Many people in TRNC then claimed that it was Turkey’s political pressures that forced Eroğlu not to challenge Denktaş.

The sixth Presidential election in 2005 led to the emergence of a new political leader. Republican Turkish Party (CTP) Presidential candidate Mehmet Ali Talat, a social democratic politician supporting unification in the island, was elected with 55.59 % of the votes in the first round. The result was shocking since until 2005, all Presidential elections were won by Denktaş and nationalist political rhetoric (independence of TRNC or unification with Turkey) was on fashion. However, with the effect of the Annan Plan referendum, a UN-sponsored peace plan to achieve settlement in Cyprus that was voted in 2004 and was rejected by Greek Cypriots, Turkish Cypriots for the first time voted for another leader and chose Mehmet Ali Talat as their second President.

In 2010, via the seventh Presidential election, Dr. Derviş Eroğlu became the third President of the Republic of TRNC with 50.35 % of the votes in the first round by defeating Mehmet Ali Talat who had got 42.87 % of the votes. The result was a reaction to the rejection of the Annan Plan by Greek Cypriots and European Union’s failure to keep its promises to Turkish Cypriots. In 2015, in the previous Presidential election, socialist candidate Mustafa Akıncı was elected in the second round TRNC’s fourth President of the Republic with 60.50 % of the votes. This was a big surprise since Akıncı had got only 26.94 % support in the first round against the favorite Dr. Derviş Eroğlu’s 28.15 % and was given no chance by the local or Turkish media. Akıncı was a strong supporter of Cyprus peace talks and unification in the island and he was able to get the support of Greek Cypriots as well.

Mustafa Akıncı (1947-), the current President of the Republic of TRNC is a Presidential candidate for the 2020 election. Akıncı lost a bit of his power and prestige since he was not able to keep his promise to deliver peace to Cypriots after peace talks failed at Crans-Montana once again in 2017 with Greek Cypriots’ unbending position. Akıncı is a courageous socialist politician having the support of a small socialist party TDP, Socialist Democracy Party. His critical attitude towards Turkey make him an unwanted candidate this time in Turkey. In an interview given to The Guardian, Akıncı said that a Crimea-style annexation of TRNC by Turkey would be “horrible”. Akıncı’s interview took harsh reaction from Turkey’s Foreign Minister Mevlüt Çavuşoğlu and Turkish President Recep Tayyip Erdoğan.

Akıncı’s opposition to Turkey is unusual and dangerous for Turkish Cypriots since Turkey still stands as the only country to recognize TRNC and helps TRNC’s economic development and recovery with various investments and aids. However, we should keep in mind that Akıncı is a politician and the political culture of Cyprus is a bit different compared to Turkey. Turkish Cypriots and especially leftist Turkish Cypriots like and support candidates that defy Turkey. Moreover, according to a survey conducted by Gezici Company in January 2020, Akıncı still seems to be the second most popular candidate with 28.8 % support. Since the leftist and anti-Turkey groups will continue to vote for Akıncı, it would not be a big surprise if he is elected once again. However, due to Turkey’s strong effect over the island, Akıncı’s chance this time seems much lower.

The most popular and the favorite candidate for this election is UBP leader and TRNC’s current Prime Minister Ersin Tatar (1960-). Tatar is a Denktaş type nationalist politician having Turkey’s support. Educated in famous Cambridge University, Tatar prefers two-state solution in the island. As Prime Minister, Ersin Tatar took the attention of Turkish media most with his plan and efforts to reopen Varosha (Kapalı Maraş) region to tourism. If this could be done, this would be a boost to both TRNC and Cyprus economy (since Greek Cypriot hotel owners will be given chance to reclaim their properties, this would be beneficial for Cyprus Republic as well).  Tatar is the leading candidate and has 34.2 % support according to Gezici Company’s research. However, Turkish Cypriot left is allergic to Turkey and leftist will never vote for Tatar. Moreover, Tatar has some problems within the UBP, since the party was divided into two with supporters of current leadership and supporters of former leader Hüseyin Özgürgün. Despite of these problems, Mr. Tatar has good chance to win this election in the second round and to become TRNC’s fifth President of the Republic. 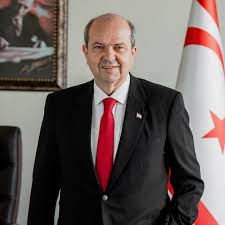 Another important candidate for the election is CTP’s young social democratic leader Tufan Erhürman (1970-). Erhürman is a young barrister, academic, and diplomat and has great potential for the future. Moreover, CTP is the castle of left-wing voters in TRNC. However, since President Akıncı still keeps its stronghold position over leftists, Erhürman might not reach the second round. According to Gezici poll, Erhürman has considerable (17.4 %) support. He is a pro-solution figure; but his leftism seems more moderate and more open to collaboration with Turkey compared to Akıncı.

Another potential President could be Kudret Özersay (1973-), a young but experienced diplomat and academic. Educated in Turkey, Özersay has a good network in Turkey, but he seems not to have upper hand against Ersin Tatar or Mustafa Akıncı since he represents the center. Özersay was able to take 17 % of the total votes in 2018 parliamentary election with his People’s Party (Halkın Partisi) by convincing many voters from the left and right. However, liberal tradition in Turkey and TRNC is weak and Turkish and Turkish Cypriot voters prefer to vote for either left-wing or right-wing parties. Thus, Özersay’s chance seems low for the moment. According to Gezici poll, Özersay had only 8.3 % support in January.

Another Presidential candidate is Theology Professor Erhan Arıklı. Leader of Renaissance Party (Yeniden Doğuş Partisi), Arıklı represents secular nationalism and Turkish migrants in the island. He has a lot of potential for the future, but he is still unknown by many people compared to popular politicians such as Akıncı or Tatar. The son of Rauf Denktaş and former leader of Democrat Party, Mr. Serdar Denktaş announced that he will not run for Presidency in this election. I think Serdar Denktaş will wait for the right time to become a Presidential candidate. Sibel Siber, former Speaker of TRNC Parliament could be a Presidential candidate as well. In 2015 Presidential election, Siber had got 22.53 % in the first round and proved that she has good potential. However, this time she does not have too much chances since the left votes will be dispersed between Akıncı and Erhürman.

Factors that Affect Elections in TRNC

Since I lived and worked as academic almost 4 years between 2012 and 2016 in TRNC, I know this country’s politics very well. First thing to be said is that TRNC is a small country (this is not a humiliation) and there are less than 200,000 voters in the country. Thus, Presidential candidates have chance to talk to all voters face to face and convince them with their personal charisma and promises. In that sense, good orators have higher chances. Moreover, campaigning and tv programs are also very important for candidates to reach all voters.

Second important parameter for elections in TRNC is Turkey’s effect. Turkey is the only country that officially makes trade with TRNC. Thus, without Turkey’s support, public services would not stand long. In that sense, non-ideological pragmatic Turkish Cypriot voters as well as those who support Turkey (mostly right-wing segments) will likely to vote for candidates pointed out by Turkey. Turkish statesmen do not openly endorse candidates in TRNC, but this time it is clear that President Erdoğan has closer relations with Ersin Tatar.

The third important factor is international conjuncture. Although TRNC seems isolated from the world, thanks to active universities and vibrant media and civil society, Turkish Cypriots are affected from global trends. In 2015, due to the charisma of Barack Obama and EU’s attractive status, Turkish Cypriots voted for the left. However, now we live in a world where United States is ruled by Donald Trump and United Kingdom realized Brexit with Boris Johnson. Thus, due to strong nationalist wings, Turkish Cypriots might vote more for the right this time.

Finally, I wish good luck to all Presidential candidates and a peaceful, free, and fair election to all Turkish Cypriots. Whoever they chose as their President, Turkey will continue to support Turkish Cypriots as a minority group who has been subjected to cruel treatment of Greek Cypriots in the recent past. As for election forecasting, I think Ersin Tatar and Mustafa Akıncı will go to the second round and anything is possible in the second round although Tatar is more advantageous.