Turkey’s influential young politician Ali Babacan established a new centrist political party called Demokrasi ve Atılım Partisi (Democracy and Leap Party) today. This was an expected move on the side of Babacan since he resigned from Turkey’s governing (2002-) AK Parti (Justice and Development Party) in July 2019 due to disagreements with party’s current ideological and political style.[1] There have been many news in the Turkish press since this resignation about Babacan and his mentor and Turkey’s 11th President of the Republic Abdullah Gül’s collaborative efforts to establish a new political party. In this piece, I am going to analyze Babacan’s new party initiative and his chance in Turkish politics.

Who is Ali Babacan?

Ali Babacan (1967-) is a famous Turkish politician who served previously as Turkey’s Minister of Economy (2002-2007), Chief Negotiator for Turkish Accession to the European Union (2005-2009), Minister of Foreign Affairs (2007-2009) and Deputy Prime Minister (2009-2015).[2] Babacan comes from a conservative/Islamist family. His aunt Hatice Babacan was a symbol for the freedom struggle of Turkey’s Islamist movement in the 1960s and 1970s together with Şule Yüksel Şenler[3]. Hatice Babacan was one of the first female students to enter into university with her headscarf (türban). However, she was forced to open her head by hardliner secularist Professors and was even tried to be sent to a mental hospital for her dressing style[4]. That is why, Babacan family gained a reputation and large support among Turkish conservatives and in the years to come, Ali Babacan has begun to been seen as the “crown prince” (veliaht) of Turkey’s Islamist movement.

Ali Babacan was graduated from TED Ankara College in 1985. He was one of the rare Islamist originated students to go TED College at those years, a prestigious private college offering English-based education and often preferred by wealthy families in Ankara. He later attended METU (Middle East Technical University or ODTÜ in Turkish), one of the best higher education institutions in Turkey established by Americans in the 1950s. Babacan entered into METU’s Industrial Engineering program due to his high scores. He was graduated from there with the highest marks in 1989. He went to the United States with Fulbright Scholarship program afterwards to do postgraduate studies and received MBA degree from the Kellogg School of Management at Northwestern University in 1992 with majors in marketing, organizational behavior, and international business. After graduation, Babacan worked in the U.S. for two years as an associate at QRM Inc. in Illinois-Chicago, a financial consulting company. He returned to Turkey in 1994 and served as chief advisor to the Mayor of Ankara the same year. He was the chairman of his family owned textile company between 1994 and 2002.

In 2001, Babacan became one of the founders of Islamist originated AK Parti. He became a deputy for Ankara in 2002 general election. He was appointed Turkey’s Minister of Economy on November 18, 2002 and became the youngest member of the cabinet, then at the age of 35. Ali Babacan turned out to be a very successful Minister of Economy. He continued to implement Kemal Derviş’s economic program that was prepared in 2001 after the huge economic crisis Turkey had. Turkey had very good growth rates between 2002 and 2007 and this increased Babacan’s reputation as a young and successful technocrat. In international meetings also he was praised with his humble and polite style. In 2005, then-Prime Minister Recep Tayyip Erdoğan appointed him as Turkey’s Chief Negotiator for Turkish Accession to the European Union in order to anneal European leaders who oppose to Turkey’s membership bid.  Between 2007 and 2009, Babacan also served as Turkey’s Minister of Foreign Affairs. After 2009, he became Deputy Prime Minister and worked harmoniously with Recep Tayyip Erdoğan and Ahmet Davutoğlu as Turkey’s then-Prime Ministers. After 2015, Babacan continued to serve in the parliament, but did not assume any ministerial role. His distancing from AK Parti due to ideological and political differences eventually led to his resignation in mid-2019. Babacan explained his resignation from AK Parti with “deep differences with the current leadership  of the party” and claimed that Turkey needs a brand new vision to get out of the crisis.[5] 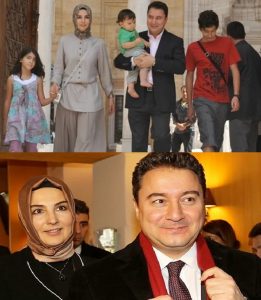 Why he establishes a new party?

Ali Babacan still defends AK Parti’s founding principles such as commitment to European type parliamentary democracy[6], separation of powers, freedom of opinion and freedom of press. However, AK Parti and President Recep Tayyip Erdoğan has transformed Turkish political system into Executive Presidentialism in 2017 with a controversial referendum. Thus, it is consistent with Babacan’s previous views that he aims to establish a new centrist political party. In an interview given to journalist Şirin Payzın in December 2019, Babacan said that this party would not be a devotee party (leader party) and he will work with a dynamic team consisted of people having different ideologies.[7] In that sense, Babacan gives the impression that he will try to be Turkey’s Emmanuel Macron by establishing a centrist (liberal) political initiative. 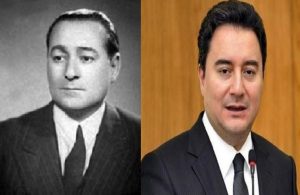 The name and logo

Ali Babacan and his team named the new party as Democracy and Leap Party (Demokrasi ve Atılım Partisi in Turkish). The name resembles to AK Parti’s name -Justice and Development Party (Adalet ve Kalkınma Partisi in Turkish)-, but makes specific reference to democracy. Moreover, the abbreviation of the party “DEVA” means “cure” in Turkish. In that sense, the party aims to present itself as a solution to Turkey’s current democratic and economic problems. The party’s logo is also enigmatic. Many journalists in Turkey commented it as two leaves within a drop of water[8]. The party still does not have an official website, but has already a Twitter account[9].

Logo of the party

The party’s founders help us to understand and materialize its ideological stance. Among party founders, there are some well-known politicians coming from different political traditions.[10] First of all, there are many names coming from AK Parti. AK Parti’s former Minister of Justice Sadullah Ergin, former Minister of Science, Industry, and Technology Nihat Ergün, and former Minister of Family and Social Policies Selma Aliye Kavaf are most important people known by the Turkish media and Turkish people. In addition the these popular names, former AK Parti deputies including İdris Şahin, Hasan Karal, Ahmet Faruk Ünsal, Mehmet Emin Ekmen, Abdurrahman Müfit Yetkin, Abdurrahim Aksoy, Ahmet Edip Uğur, and Mustafa Yeneroğlu are also among DEVA Parti’s founders. This proves that the party will try to become the new AK Parti or “AK Parti 2.0”, with many conservative figures coming from Turkey’s still governing party.

The second group of the founders can be categorized as intellectuals. Journalist Gülay Göktürk, academic and strategist Metin Gürcan, and feminist activist Sanem Oktar can be categorized within this group. Although these are important names that can help Babacan to embrace different segments of the society, the party needs much more popular journalists, intellectuals, and celebrities to transform into a real centrist party and attract the attention of Turkish people.

The third group consists of former Turkish statesmen. Former Denizli Mayor Hasan Canpolat, former Deputy Secretary of Turkey’s Ministry of Agriculture and Forestry Sedat Kadıoğlu, former leader of ultranationalist Grey Wolves (Ülkü Ocakları) organization and MHP (Nationalist Action Party) politician Ramiz Ongun, and Turkey’s former Munich ambassador Abdurrahman Bilgiç  can be listed within this category. The presence of these statesmen show that the party has potential, but from my understanding this is not enough for a party that would govern Turkey. Thus, the party needs some experienced Turkish statesmen specialized in different issues.

Moreover, according to Turkish journalist Ruşen Çakır, who is a good expert on party politics in Turkey[11], among 90 founders of DEVA Parti, there are 27 women and 16 young people. This shows that, the party will try to appeal to dynamic groups within the Turkish society. Moreover, among female members, non-headscarf wearing women do not constitute a minority. From my perspective, this is a clear message given to secularist groups since the party will try to distance itself from Islamist politics and to become a centrist party. In addition, there are some Kurdish originated members within the party (such as Rojhat Ölmez) alongside with Turkish nationalists such as Ramiz Ongun. This shows that the party has basically a “catch-all-party” characteristic and it will try to appeal to all groups who respect democratic life. As far as I am concerned, Babacan and his party could find support among business circles and conservative segments who are not satisfied with the current regime. I think Babacan’s strongest arguments would be return to parliamentary regime and full-scale democracy in European standards.

Finally, in my opinion, Ali Babacan and DEVA Parti has great potential if AK Parti and President Erdoğan could not find solutions to Turkey’s economic and political problems. However, President Erdoğan so far has proved himself to be a very successful politician, winning all elections and referendums since 2002. That is why, Erdoğan could find new populist ways and devise new tactics to mobilize the Turkish right. In that sense, we have to wait and see how Babacan and DEVA Parti will be doing in the following months.

[2] For his biographical details, see; https://en.wikipedia.org/wiki/Ali_Babacan.

[10] To see the full list of founders, check; https://www.gazeteduvar.com.tr/politika/2020/03/09/devanin-kurucularinin-tam-listesi/.