Similar to other countries, due to Covid-19 (coronavirus) crisis, party politics have been forgotten for a while in Turkey. However, because of the strong political polarization in the country, the latest voting rates of political parties and the current approval rate of President Recep Tayyip Erdoğan are important indicators for understanding current state of affairs in the country. Meanwhile, although there have been discussions recently in the Turkish press about the possibility of an early Presidential election, I do not think President Erdoğan and his party (AK Parti) will be interested in calling for early elections in times of economic crisis mainly caused by the Covid-19 disease that literally slowed down -if not stopped- international economic activities. That is why; I think the next Presidential election will not take place until 2023, the 100th anniversary of the Republic of Turkey. A recent poll published by Istanbul Economics Research & Consultancy (İstanbul Ekonomi)[1] on the other hand underlines important domestic political developments in relation to Covid-19 pandemic, its complications, and the government’s response to this crisis. 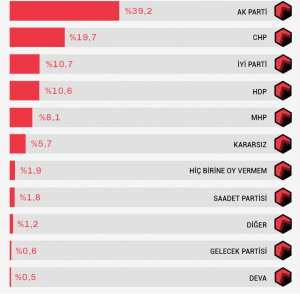 According to information given by the company’s General Manager Can Selçuki, a research was conducted on May 4-5, 2020 about the current voting rates of political parties with 1,537 participants from 12 different Turkish cities.[2] The research indicates that due to government’s successful response to crisis, the governing AK Parti’s (Justice and Development Party) voting rates increased from 35.8 % to 39.2 % in the last few weeks, whereas the main opposition party CHP’s (Republican People’s Party) votes fell to 19.7 %. Selçuki claims that since the Covid-19 pandemic created a chaotic environment with increasing fear and insecurity of the people, AK Parti government was able to increase its popular support with successful crisis management conducted by President Erdoğan and his successful Minister of Health Fahrettin Koca. Similar to Turkey, in many other countries as well (the U.S. and Brazil are two exceptions) existing governments were able to increase their popular support during this process.[3] The poll suggests that the Good Party (İYİ Parti) has still considerable support with 10.7 % of the votes, whereas the Nationalist Action Party (MHP) is around 8.1 % for the moment. Pro-Kurdish HDP (Peoples’ Democratic Party) on the other hand has a popular support around 10.6 %. New political parties including Professor Ahmet Davutoğlu’s Future Party (Gelecek Partisi) and Ali Babacan’s Democracy and Leap Party (DEVA Partisi) have only around 0.5-0.6 % support for the moment, but Selçuki notes that this might be caused because of people’s lack of knowledge about these new political initiatives since Turkish media does not give them enough chance to voice out their political views. According to this research’s findings, in terms of Presidential election, AK Parti and MHP votes (Cumhur İttifakı-People’s Alliance) reach 47.3 %, which stays a little short of the % 50+1 of the votes that is required to be elected in the first round for President Erdoğan. Opposition bloc (Millet İttifakı-Nation Alliance) on the other hand reaches 30,4 % of the votes for the moment; but it should not be forgotten that most of the supporters of the pro-Kurdish HDP and new parties also will be likely to support CHP’s candidate in the next Presidential election. Thus, Nation Alliance’s votes could be easily reaching over 40 % in the first round with considerable Kurdish support and increasing performance of the newly established political parties. This might secure a second round (in case there will be a strong third candidate) and anything is possible in the second round because President Erdoğan will be vulnerable for the first time.

Another research[4] made by the same company on the other hand points out that President Erdoğan is still considered as the most successful politician in Turkey; but Istanbul mayor (municipal leader) Ekrem İmamoğlu and Ankara mayor Mansur Yavaş are following him at close distance and the gap is reducing between Erdoğan and CHP’s new political stars. This might be a strong indicator for CHP in choosing its next Presidential candidate; so, either İmamoğlu or Yavaş could be Nation Alliance’s Presidential nominee against Erdoğan while the party leader Kemal Kılıçdaroğlu could wait for return to Parliamentary system first in order to become Prime Minister.

Finally, in assessing these statistics, one should not forget that the effects of the global economic crisis caused by Covid-19 pandemic will hit Turkey hard similar to all other countries and the next months of 2020 will not be easy for the government in terms of economic performance. However, starting from 2021, if things will be returning to normal in full-scale, Turkish economy might have a good performance similar to the first quarter of 2020 (before the pandemic), during which Turkey had 4.5 % economic growth.[5]