Dr. Maxime Gauin is working as Visiting Professor and continues to make research since August 2012 for Turkish think-tank AVİM (Avrasya İncelemeleri Merkezi). Gauin took his BA degree from the department of History at Bordeaux-III (2005). He completed his master studies at Paris-I Sorbonne University and École Normale Supérieure de Lyon in the department of Contemporary History. Dr. Maxime Gauin took PhD degree recently from the History department at METU (Middle East Technical University). Gauin previously worked as researcher for USAK, another Turkish think-tank. He made publications in academic journals including European Journal of International Law, Journal of Muslim Minority Affairs, and International Review of Turkish Studies. Moreover, his articles were published in important newspapers such as Hürriyet Daily News, Daily Sabah, Haaretz, The Jerusalem Post, and Cumhuriyet. Maxime Gauin is an expert on Armenian Question (1915 events) and Turkish-French relations. 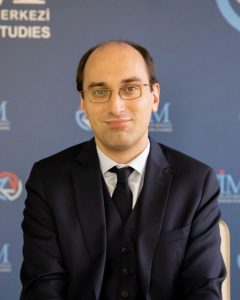 Dr. Ozan Örmeci: Maxime Gauin, thank you for the interview. You are an exceptional scholar from France in the sense that -unlike many other French scholars- you do not describe 1915 events as “genocide”. Could you please tell us what had happened in the Ottoman Empire in 1915 and why this unfortunate event cannot be called as “genocide”?

Dr. Maxime Gauin: I am exceptional among my compatriots/colleagues only in the sense that I have worked on the Armenian Question in using hundreds of boxes and microfilms from the archives, as well as a more than 50 pages long bibliography and various compilations of published documents. All the main experts of Turkish history in France (Paul Dumont, François Bacqué-Grammont, Robert Mantran, Odile Moreau, Xavier de Planhol, Gilles Veinstein, Stéphane Yerasimos) have been either skeptical toward the “Armenian genocide” claims or explicit opponents to this charge. However, they did not work on this issue as much as they could. Most of those who promote the “Armenian Genocide” charge in fact are not historians (such as Yves Ternon, who is a surgeon by profession, and Jean-Marie Carzou [Zouloumian], who is a specialist of literature) or have no qualification to say anything on the subject (such as Vincent Duclert, who is a specialist of the Dreyfus Affair and has never set foot in any archive related to the Armenian issue and ignores a large part of the bibliography itself).

On the core of the issue now: First of all, the 1915 events cannot be understood without considering the half-century of insurrectional activities by the Armenian nationalists, namely the revolts at Zeytun (1862, 1878, 1895-96), Sasun (1894, 1904), Van (1896), the failed plot of Erzurum (1882), the various uprisings and terrorist acts in 1895 (too numerous to be all cited here), the arson of Thessaloniki/Selanik in 1890, the hostage taking at the Ottoman Bank in 1896 (which was just one part of a more general scheme to devastate Istanbul, but the scheme was discovered at the last moment by the Hamidian police, except the part related to the Ottoman Bank), the attempt to assassinate Abdülhamit in 1905, the failed  the inter-ethnic clashes in Adana in 1909.

In 1914-1915, the Ottoman Empire was battling on several fronts (Caucasus, Iraq, Sinai, and soon Çanakkale) and was confronted to a series of revolts and uprisings. In North-Eastern Anatolia, the main aim of the Armenian insurgents was to cut the few roads sufficiently large for the transportation of the supply to the Ottoman Army fighting the Russians; to cut the telegraphic lines for the same reason; and, when they were sufficiently numerous, to seize a whole province (vilayet) in conjunction with the Russian forces, particularly by the Armenian volunteers’ units, largely made of Ottoman Armenians having crossed the boundary in 1914 (the most famous leader being Garegin Pasdermadjian, former deputy at the Ottoman chamber of deputies from 1908 to 1912, but we could also think to Garegin Nzhdeh, future Nazi officer).

In Çukurova and neighboring regions (Zeytun in particular), the main aim was to cut the only railroad connecting Istanbul and Anatolia with the Arab provinces, and if possible to cause an Anglo-French landing. There were several amphibious operations by the British Navy and bombing by French vessels, at the end of 1914 and during the first months of 1915, but no massive landing, for a series of reasons (the rivalry between Paris and London, the absence of links between the French government and the Armenian nationalists at the beginning of the war, the preference of several French officers for Beirut as a place of landing and the priority given by the British cabinet to the operation at Çanakkale). Around Bursa, there were uprisings, too, to attack the communications between the Ottoman capital city and the front of Çanakkale.

Initially, the Ottoman government tried to answer these revolts by police operations beheading the Armenian nationalist committees (particularly the arrests in Istanbul on 23, 24, and 25 April), local relocations and local military operations, but during the month of May 1915, the fear that the scenario of Van could repeat itself, in Sivas and Erzurum for example, led to a heavier measure. This measure was inspired by the forced relocations carried out by the Spanish Army against the Cuban separatists, by the British Army against the Boers in South Africa and by the U.S. Army against the Philippine nationalists. The rationale is; an insurgency is dangerous only if supported by all or part of the civilian population, so, if you cannot suppress an insurgency by classical methods, you have to relocate all or part of the civilians, to deprive the rebels from supply.

Confronted to such arguments, supporters of the “Armenian Genocide” claims that the ultimate evidence: “There are no Armenians in Turkey today, except in Istanbul.” First of all, it is inaccurate (there are still Armenians in Hatay and to a lesser extent in Ankara, where they were in significant numbers until the 1970s; there were still Armenians on the Black Sea coast in mid-1920s, and so on). Then, this argument is based on a (genuine or feigned) ignorance of the chronology. The almost disappearance of the Armenians in Western Anatolia is due to scorched earth policy of the Greek forces in summer 1922: Destroying everything, killing, and raping Turks as much as possible, and forcing the Christians (Greeks and Armenians alike) to leave. The withdrawal from Eastern Thrace was less violent, but the Christians were forcibly relocated to Greece by the Greek forces, not by the Turkish Army. Moreover, the reduction of the Armenian population in Konya is mostly due to the invitation to move to Adana in 1919. These immigrants were expelled to Lebanon by the French authorities in 1920.

Dr. Ozan Örmeci: Due to your views on 1915 events you face with many difficulties in France and other countries. In the past, similar pressures were exerted on scholars who do accept 1915 events as genocide in Turkey. Why do you think this historical event is so political and is not there any chance for historians to freely discuss and give an expert opinion on this highly controversial matter?

Dr. Maxime Gauin: I have been indeed insulted (one nationalist Armenian has been sentenced in April 2010 for having insulted me), defamed (four cases are pending), threatened to death, editors of journals who are not sufficiently courageous cancelled promises to publish some of my articles after having been themselves threatened, etc., but Gilles Veinstein, former Professor of Ottoman History at the Collège de France suffered much worse. Actually, he even developed the cancer that eventually killed him in 2013 as a result of the years-long (1998-2004) hateful campaign against him. Stanford Jay Shaw, Professor of Turkish History at the University of California-Los Angeles until 1997, was the victim of an attempt of assassination by explosive in 1977 and had to spend six months in Turkey in 1982 to escape another squad of assassins. I know nothing comparable in Turkey. On the contrary, I have been amazed by the tolerance enjoyed by “scholars” who made no secret of their Leninist or Kurdish nationalist ideas.

The issue has been politicized from the beginning. In its current dimension, it emerged in the mid-1960s as an encounter of interest between the USSR, which was looking for tools to divide the West (Turkey is a NATO member since 1952 and presented its candidacy to the European Community in 1959) and the traditional structures of the diaspora (Gregorian church, Armenian Revolutionary Federation, Hunchak, Ramkavar), threatened in their existence by the assimilation in France and the United States and developed during the 1970s and 1980s as a result of terrorist activities, still commemorated with high pride in the Armenian diaspora. Just think about Hampig Sassounian, the assassin of Turkish Consul General Kemal Arıkan, or about the “Lisbon Five”, five kamikaze terrorists. What kind of discussion do you expect with the last nostalgics of the USSR or with those who commemorate terrorist attacks?

Dr. Ozan Örmeci: You have been living in Turkey for several years. You completed your PhD in METU and work as expert for Turkish think-tank AVİM. How is your life in Turkey as a French scholar?

Dr. Maxime Gauin: It is a satisfactory life. The reputation of the Turkish people, as far as welcoming is concerned, is not exaggerated.

Dr. Maxime Gauin: Occasions have been missed during the last years. I mean, primarily, the defeat of Nicolas Sarkozy in 2012 and the election of Emmanuel Macron in 2017. The first contacts of Mr. Macron with Mr. Erdoğan were not bad at all. But the children of Turkish immigrants in France are among the last, if not the last, in terms of education (I am speaking quantitatively, of course there are exceptions). Most of the leaders of their associations cannot speak more than 300 words of French. There is one country in the world where there is a massive Turkish immigration and no umbrella organization: France. The main (I did not say the only) model of social elevation is to inherit from father’s business (masonry and public works company, very often) and to expand it. It is definitely lucrative, it certainly requires hard and respectable work, but it does not help to answer the propaganda of people who are physicians, lawyers, political scientists, journalists, etc., by profession. I also have to say that my compatriots of the academia, or who are journalists, rarely answered with courage the character assassinations and physical threats used by Armenian and Kurdish nationalists.

Dr. Ozan Örmeci: French President Emmanuel Macron declared April 24 as the commemoration day of the Armenian Genocide in France. Why do you think this event is so important for France and do you think Macron’s decision is caused by domestic political reasons or international humanitarian sensitivies?

Dr. Maxime Gauin: For France, strictly speaking, this event has no importance at all. Most of my compatriots do not care about 1915. But the Armenian nationalists have rarely been challenged as much as necessary for decades and the very few times they were, the Turkish and its friends always won. For example, it took two years (January 1984-January 1986) from François Mitterrand (French President of the Republic from 1981 to 1995) to shift from the support to the “Armenian Genocide” label to the support for a commission of historians. In May 2011, the Masse bill, supposed to criminalize the “denial of the Armenian genocide” was rejected by a large majority of Senators. After he changed his mind for strictly electoral reasons, Nicolas Sarkozy had to manage the discussion of the Boyer bill (very similar to the Masse bill) shortly before Christmas, because he did not trust his own majority. He was right on this point; there were only 25 deputies to vote the Boyer bill, but 76 to sign the application to the Constitutional Council. And actually, as you know, the bill was censored in February 2012.

Dr. Ozan Örmeci: Dr. Maxime Gauin, thank you for this interview and I wish you best in your studies.