HOW TO REDUCE TURKISH-GREEN TENSION IN THE EASTERN MEDITERRANEAN?

Turkish-Greek relations have been passing from a period of crisis once again after almost two decades. Tension between two neighboring Mediterranean states was high again in 1996 due to Kardak/Imia crisis. Following this, another crisis emerged in 1999 due to the capture of Abdullah Öcalan, the leader of the internationally recognized terrorist organization PKK, by Turkish intelligence forces near Greek Embassy in Kenya.

Following these two crises, starting from 1999, upon the efforts of İsmail Cem and George Papandreou, two countries’ visionary then-Foreign Ministers, Turkey and Greece entered into an era of spring and bilateral relations began to increase in almost every field. Turkey-Greece High Level Cooperation Council (Türkiye-Yunanistan Yüksek Düzeyli İşbirliği Konseyi) was established in 2010. So far, 4 meetings were organized; first in Athens in 2010, second in İstanbul in 2013, third in Athens in 2014, and fourth in İzmir in 2016.[1] Thanks to this mechanism, 54 different official documents were signed between Ankara and Athens.

Most recent high-level official visits took place in 2017 and 2019. In December 2017, Turkish President Recep Tayyip Erdoğan visited Athens and Komotini (Gümülcine). In February 2019, then-Greek Prime Minister Alexis Tsipras visited Turkey. In addition, in September 2018, then-Greek Foreign Minister Nikos Kotzias visited İzmir in order to inaugurate the recently restored historic building of the Greek Consulate General, in the presence of the Turkish Foreign Minister Mevlüt Çavuşoğlu.[2] The rapprochement process between two countries in the 2000s and early 2010s was materialized on the basis of Greek support to Turkish accession to European Union (EU).

If we look at the statistics, in 2014, bilateral trade volume reached 5.6 billion U.S. dollar, a significant number for both countries and two times higher compared to 2010 statistics.[3] Although in 2015 and 2016 there was a decrease in bilateral trade, the figures started to increase once again in 2017. The total value of Greek direct investments in Turkey is about 6.8 billion U.S. dollar and Turkish direct investments in Greece worth almost $ 500 million U.S. dollar.[4] Bonds between businessmen constitute a positive factor in developing Turkish-Greek relations. Moreover, tourism industry seems to be another attractive aspect of developing economic relations. In 2018, approximately 781,000 Turkish tourists visited Greece, whereas 665,000 Greek tourists came to Turkey thanks to almost 52 weekly flights organized by Turkish airline companies to Greek cities.[5] Atatürk’s Museum (Atatürk’s House) in Thessaloniki (Selanik), Athens, Ecumenical Patriarchate of Constantinople in Balat, and İstanbul are most popular places in terms of tourism-based relations between Turkey and Greece.

However, Turkish-Greek relations entered into a new turbulent period in the last two years due to increasing opposing views and disagreements over the partition of the Eastern Mediterranean in addition to ongoing Aegean and Cyprus Disputes.

What is to be done for the Current Dispute?

If we look at the current Turkish-Greek tension, we see several components intertwined. These issues should be solved separately or all together in time and the militarization of the conflict should be avoided to cause further damage to bilateral relations. 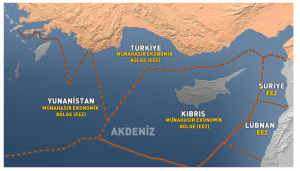 1. The immediate thing to be done on the side of Greece is to demilitarize the island of Kastellorizo (Meis), which is almost 2-3 kilometers away from Turkish shore in Kaş. The militarization of the island is seen by the Turkish public as a provocation. According to the Article 14 of the Paris Treaty (1947), Greece was given full sovereignty of Dodecanese Islands (Stampalia-Astropalia, Rhodes-Rhodos, Calki-Kharki, Scarpanto, Casos-Casso, Piscopis-Tilos, Misiros-Nisyros, Calimnos-Kalymnos, Leros, Patmos, Lipsos-Lipso, Simi-Sym, Cos-Kos, and Castellorizo) and these islands were decided to be kept demilitarized.[7] It is no secret that Greece has been sending its soldiers to many of the Dodecanese Islands in recent years. Turkish journalist Engin Baş who has been visiting Kastellorizo frequently underlines that there could be currently 600-700 Greek soldiers who are transferred here according to the Turkish press, but his information from the island is that there are approximately 100-150 Greek soldiers there.[8]

2. As a response to possible Greek goodwill in Kastellorizo, Turkey could stop its drilling activities and its Navtex alerts in the disputed areas of the Eastern Mediterranean in order to wait for a political agreement in the region to set the maritime boundaries and economic exclusive zones of all coastal states. This could be followed by the demilitarization of other Dodecanese Islands by Greece in accordance with the international law. These steps could reduce the tension and weaken the hands of hardliners on both sides.

3. After these steps absolutely necessary for the short term, an international conference on the Eastern Mediterranean dispute could be organized by all coastal states with the initiative of a neutral third party (this could be the NATO, the United States and/or United Kingdom preferably since the EU acts as the defender of its members Greece and Cyprus Republic and could not mediate between two parties). During this conference, the most well-known and respected International Law professors around the world could be given chance to express their views freely and propose a permanent equitable solution to the problem. All Mediterranean countries (Greece, Turkey, Cyprus, Egypt, Libya, Lebanon, and Syria) should be ready for reaching an agreement and give some concessions there in order to take advantage of the rich hydrocarbon resources of the region.

4. Cyprus Dispute could be separated from the Eastern Mediterranean dispute since it involves the relationship between two different communities having equal rights over the Republic of Cyprus of 1960. So, agreeing on enduring maritime boundaries in the Eastern Mediterranean will solve the crisis for the moment and the future of Cyprus could be set by the two communities (Greek Cypriots and Turkish Cypriots) afterwards upon a new negotiation process aiming to finalize the situation.

5. Aegean Dispute between Turkey and Greece should be shaped on the basis of 1976 Bern Agreement[9] to which both countries are signatory. Greece should avoid to unilaterally declare its territorial waters in the Aegean Sea as 12 miles, an act Turkey accepts as “casus belli“. 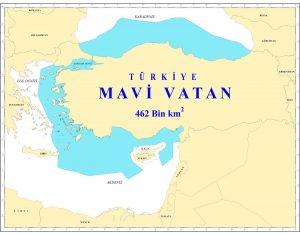 Drawn by retired Rear Admiral Cihat Yaycı, a map showing Turkish claim for the partition of the Eastern Mediterranean known as the “Mavi Vatan” (Blue Homeland)[10]

“Geography is destiny” according to many International Relations experts. Turkey and Greece will continue to neighbor each other forever and thus, these two countries should be able to find ways and mechanisms to avoid military escalation in order to create more prosperous and democratic regimes. In the times of Covid-19 (coronavirus) disease, the absurdity of ultranationalist policies become even more apparent than ever since all countries need to cooperate in order to protect their citizens’ security and health. So, using diplomatic channels and getting ready for a tough negotiation process to reach a fair solution should be the preferred method of both countries. History proves that Turkish nation is always ready for peace in case they are convinced that the other side also aims to reach peace.