Democratic presidential candidate and former U.S. Vice President Joe Biden is elected 46th President of the United States. Biden will start his tenure in office in January 2021. Joe Biden recently began to announce his picks for the new cabinet as well. Among these choices, especially Antony Blinken, the new U.S. Secretary of State, seems to be an important name for the future of Turkish-American relations. New National Security Advisor Jake Sullivan, who has previously participated into JCPOA talks and had important duties both in Bill Clinton and Barack Obama administrations, is another young bureaucrat that seems to be very competent about Middle East politics. Another important choice that Mr. Biden and his Vice President Kamala Harris will face is the new Secretary of Defense. According to American press, Michèle Flournoy has very high chances to become the new Secretary. The new CIA Director also seems to be a crucial choice for the future of U.S. security preferences as well as American foreign policy in the new era. American analysts focus on Tom Donilon for this important post. In this piece, I am going to state my own ideas about the future of Turkish-American relations in Biden era.

First thing first; with Donald Trump gone, it is almost certain that during Joe Biden era Turkish-American relations will be more based on institutional framework rather than personal ties between two countries’ leaders. However, it is noteworthy to state that Joe Biden and Recep Tayyip Erdoğan also know each other for long years and they have personal ties. So, with Biden caring more about institutions and having the priority of focusing in domestic politics due to devastating effects of Covid-19 pandemic, racial tensions that rose during Trump era, and the economic decline caused by the pandemic, we might expect U.S. institutions such as the U.S. Department of State to become more effective in American foreign policy and Turkish-American relations. Historically, the U.S. Department of State is more positive about relations with Turkey compared to the U.S. Congress (due to the negative effect of domestic politics; e.g. Armenian and Greek lobbies etc.).

Secondly, the effect of Antony Blinken as the new Secretary of State will be felt in my view in terms of Turkish-American relations. Blinken is a liberal interventionist who knows U.S. foreign policy-making process due to his earlier experiences and duties. Blinken knows Turkey also very well and he seems to be acknowledging the strategic importance of Ankara in his latest interviews.[1] Although he advocated previously the arming of the Kurdish militia (PYD/YPG)[2] that Turkey identifies as the extension of PKK and terrorist groups and he still defends clearly bi-zonal, bi-communal federal solution in Cyprus[3], his deep understanding of the strategic importance of Turkish-American axis seems to be a positive factor for the new term in creating ways to solve disagreements. Blinken’s support to Turkish democracy and his condemnation of the July 15, 2016 coup attempt is also a positive factor for the Turkish government and people.[4] 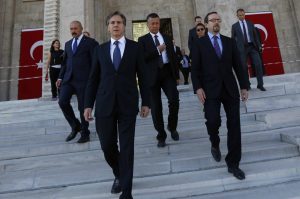 Thirdly, Turkey’s economic shakedown could also be a positive factor for Ankara to reconsider its foreign policy choices in Biden era. It is a fact that Turkey’s economic slowing down is a reflection of its problematic relations with the U.S. and the European Union (EU) in recent years. It is no secret that international economic actors and financial institutions look at relations with Western capitals as an important factor in making the risk assessment and rate this country’s credibility. So, with a new government assuming office in Washington, two countries can work on ways to develop their relations for creating an economic stimulus.

Fourthly, the first critical issue to be solved is about the S-400 and F-35 crises. Many American and Turkish analysts claim that Biden administration could force the implementation of CAATSA (Countering America’s Adversaries Through Sanctions Act) sanctions against Turkey due to its strange choice of buying S-400 air missile defense system from Russia instead of NATO countries. However, since Turkey had to buy S-400 after American decline of Turkey’s long effort to buy Patriot air missile defense system and CAATSA law (President Trump approved the law on August 2, 2017[5] while Turkey and Russia signed the S-400 deal in July 2017[6] few days before the legislation of CAATSA) was legislated after Turkey and Russia made the deal, it seems to me that President Biden and his team could be more flexible against Ankara. Here we should also remind that other NATO countries such as Greece, Slovakia and Bulgaria also own Russian made air missile defense systems (S-300).[7] So, Biden administration might prefer to open a blank page in bilateral relations by allowing Turkey to use S-400 system out of its NATO-based general defense structure, e.g. solely for the protection of Russian-made Akkuyu Nuclear Power Plant in Mersin and might allow Turkey to return to F-35 programme.

Fifthly, the most serious problem on the side of Turkey is clearly American support to Syrian Kurds. Although there is no short recipe for solving this crisis, it is still possible for both countries to work on a roadmap for a long-term strategy in Syria about protecting Kurds and preventing PYD-YPG to become a danger against Turkey at the same time. However, two countries absolutely need the support of Russia in order to create a new constitutional regime in Syria and finalize the status of Kurds before disarming PYD-YPG. So, Syrian crisis might also become a positive factor for the normalization of U.S.-Russian relations (other than Ukraine crisis of course). Considering Antony Blinken’s earlier statements, it is still possible that the U.S. might try to force regime change policy in Syria; but President Biden’s approach to Syrian crisis is more moderate and less adventurist.

Sixthly, Turkish President Recep Tayyip Erdoğan’s recent statements about reform process in economy and judiciary[8] are positive signals for Turkish democracy and Turkey’s relations with the U.S. and the EU. Erdoğan was once (in the early 2000s) Turkey’s most courageous reformist since he started peace talks with the outlawed PKK, legislated most comprehensive reforms in the whole Republican history during the EU integration process, and openly challenged the military tutelage over Turkish democracy. So, although Erdoğan’s coalition partner within the Cumhur İttifakı (People’s Alliance) MHP (Nationalist Action Party) will continue to create some problems, in fact this could become a chance for Turkey to conduct more cautious and long-term structural reforms.

Seventhly, the Cyprus Problem and Turkish-Greek and Turkish-European disagreements in the East Mediterranean are a chance for the new U.S. administration to show its ability in problem-solving. It is a fact that the most serious challenge to U.S. and the EU comes from their inability to react in times of crises and to solve problems unlike Russian leader Vladimir Putin who was able to bring peace to Caspian countries by creating a new regime of delimitation of the Caspian Sea recently. Putin also could solve the problem in Nagorno-Karabakh and normalize relations between Armenia, Azerbaijan, Georgia, and Turkey in the near future by marginalizing U.S. and French effect in the South Caucasia. So, although his methods are controversial, American and European leaders should take Putin as a role-model in terms of solving problems and providing stability. Cyprus Problem exists for more than half a century and unfortunately the United Nations (UN), the EU, and the U.S. do not care about Turkish and Greek Cypriots who want their country not to be mentioned with the attribution of “Problem”, “Dispute” etc. Here, diplomatic flexibility should involve all methods (federal solution, two states solution, delimitation of the Eastern Mediterranean and Aegean seas as well as economic cooperation in terms of the transfer of hydrocarbon resources in the region) and a final agreement should be reached.

Lastly, with his immense political experience and insistence on democracy and human rights, the new U.S. President Joe Biden could become a chance for Turkish-American relations as well as the global order. So, in my humble opinion, Turkey should start making necessary preparations in terms of democratization etc. to fix relations with the new U.S. administration. Opening a blank page is always necessary in diplomacy since International Relations could be quite problematic and conflictual sometimes.