British (United Kingdom/UK) Foreign Secretary (Secretary of State for Foreign, Commonwealth, and Development Affairs) Dominic Raab visited Cyprus on February 4, 2021 Thursday. Raab met with the Cypriot leaders (Cyprus Republic/South Cyprus Greek Administration President Nikos Anastasiades and Turkish Republic of Northern Cyprus/TRNC President of the Republic Ersin Tatar) on the same day. Ahead of the visit, the young Foreign Secretary gave these messages: “The UK and Cyprus have deep, historic ties, spanning education, defence, trade and – most importantly – our people. The UK is committed to supporting our friends in Cyprus in the pursuit of lasting peace in this region. We will be working closely with our Cypriot partners to drive forward a successful resolution to the conflict in Cyprus at UN talks in the next few weeks.”[1]

The visit was largely understood as a British pulse check ahead of the unification talks that will resume on late February or early March in New York. New York Talks will include three guarantor states of the Cyprus Republic; Greece, Turkey, and the United Kingdom alongside with the leaders of Turkish Cypriots and Greek Cypriots.[2] Officials from the United Nations (UN) and European Union (EU) will also be present at the three-day summit as observers. Talks will start in a convenient conjuncture for settlement since Turkish-EU relations reached an all-time low level due to tensions in the Eastern Mediterranean between Turkey and some European states including Greece, Cyprus, and France and the EU officials began to talk about implementing sanctions against Turkey in 2021. Cyprus talks will also coincide with Turkish-Greek exploratory talks that were reinstated in early 2021 after the crisis in the Eastern Mediterranean. However, one should remember that Cyprus talks take place for almost 50 years and so far an agreement could not be reached. The closest point for unification was 2004; when Turkey and Greece both supported a referendum (Annan Plan) for the settlement in the divided island on the eve of Cyprus accession to EU. However, Greek Cypriots rejected the settlement plan although Turkish Cypriots accepted it with a great majority. In the mid-2017, at Crans-Montana, negotiation talks failed once again although both Presidents (then-TRNC President of the Republic Mustafa Akıncı and Nikos Anastasiades) were openly supporting unification.

So, what could be the actual British positioning in the Cyprus negotiations? Are there any hopes for a settlement in the island considering Ersin Tatar’s more hawkish political positioning and Nikos Anastasiades’ domestic political problems related to EU golden passports scandal? In this piece, I’ll try to answer these questions.

During his single day visit, British Foreign Secretary had a busy schedule. Alongside with two leaders, Raab met with Greek Cypriot Foreign Minister Nikos Christodoulides and UN Special Representative in Cyprus Elizabeth Spehar and also visited British military facilities in the island. During his meetings, Raab gave positive messages. During his meeting with President Anastasiades, Raab underlined that flexibility and compromise are key to making the most of a new UN bid to restart talks on resolving Cyprus’ decades-old ethnic division.[3] He also said that his country is ready to support the peace talks. In addition, Raab underlined that the status quo in Cyprus does not favor any of the sides and his country is ready to take full part in the settlement process.[4] During his meeting with Greek Cypriot Foreign Minister Nikos Christodoulides, Raab stated British support for the UN Secretary-General’s framework, the Convergences achieved, and the February 2014 Joint Communication.[5] While giving positive messages, the young Foreign Secretary did not openly point out any solution methods (bicommunal, bizonal federal state or two states solution). According to Turkish media, this created a bitter taste among Greek Cypriots.[6] However, in fact, a reference to 2014 agreement was a support given to federal solution since the Article 3 of the agreement clearly point out federalism as the only viable option.[7] 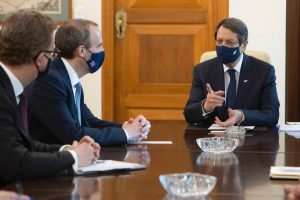 During his visit to TRNC President of the Republic Ersin Tatar, Dominic Raab repeated his diplomatic statements. TRNC President of the Republic Ersin Tatar on the other hand openly stated that he favors two states solution and since the UK is out of the EU, there can be direct flights and direct economic relations between the UK and TRNC.[9] Tatar also underlined that he asked for the purchase of British Oxford-AstraZeneca vaccine to cope with the Covid-19 pandemic and the British Foreign Secretary welcomed this demand.[10] In addition, TRNC President of the Republic underlined that there are at least 300,000 Turkish Cypriots living in the UK and around 10,000 British citizens in the TRNC and the relations between the two countries will be for the benefit of these citizens.[11]

Does the UK really support unification in Cyprus?

Of course, as a Turkish scholar who had lived and worked several years in TRNC and had warm and cordial relations with Turkish Cypriot community, I cannot speak on behalf of the UK. I should also mention that since the UK is a country that respects international law and continues to be a permanent member of UN Security Council, British politicians on active duty cannot make bold open statements about the recognition of TRNC. However, in my humble opinion, a Britain who had done the Brexit will be less likely to support the unification process in Cyprus. There are several reasons that direct me to think in that way. 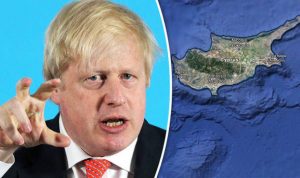 First of all, since the UK is now officially out of the EU and EU passports will no longer be available for British citizens, the presence of British residents and tourists in Cyprus could become a problem soon. Thus, the existence of TRNC as a de-facto state where British people are more than welcomed is an asset for British interests. Secondly, the inclusion of TRNC into the EU will harm British interests both economically and strategically. Considering the emergence of quick German dominance in the Eastern Europe and recent strategic French gains in the EU part of the Cyprus (France recently gained military access to Evangelos Florakis Naval Base in Mari, Larnaca) following the EU enlargement in 2004, one can easily foresee similar thing happening in the North Cyprus as well after a possible unification. Thirdly, in the mid-2010s, the British government announced that it will give up from half of its territories in Cyprus (around 3 % of total Cyprus land) in case of a settlement.[12] This was a message given to Cypriots during David Cameron’s tenure in office in order to support the settlement process. But since the UK is now out of the EU, it is hard to imagine British Prime Minister Boris Johnson agreeing to give half of its territories (in fact these are military zones) to Greek Cypriots without any concrete political gain. Lastly, declarations made by some former British statesmen including the former British Foreign Secretary Jack Straw encourage me to claim that Britain does not want a unified Cyprus. Mr. Straw said in 2017 that Cyprus should be officially divided into two and the UK should recognize TRNC.[13]

Considering Brexit and current domestic political developments in Cyprus, Turkey, and Greece, could there be a chance for New York Talks to result in a productive manner for reunification? Unfortunately, I do not have high hopes for New York Talks. First of all, TRNC has the most nationalist President since Rauf Denktaş now. Ersin Tatar is a right-wing nationalist who only favors two states solution and he does not want to renegotiate the federal option which failed several times before. Secondly, Greek Cypriot President Nikos Anastasiades is not living his best days domestically due to EU golden passports scandal. Since historically the Greek Cypriot right-wing politics do not favor federalism in the island and Anastasiades is one of the rare right-wingers supporting unification, he will not be very strong and comfortable at the negotiation table. Thirdly, Turkish government is also leaning towards nationalism in recent years due to Turkish nationalist MHP’s support for the government that is crucial for the survival of President Recep Tayyip Erdoğan. Lastly, Greek Prime Minister Kyriakos Mitsotakis will also be less open to negotiation and giving concessions compared to Alexis Tsipras, the previous left-wing Greek PM.

For all these reasons, I think one should not have high hopes for the New York Talks. In this conflictual period, the most rational thing seems to be to restart unification talks in Cyprus and exploratory talks between Turkey and Greece in order to avoid possible military clashes in the Eastern Mediterranean. But for a real settlement, we need to wait for reformist leaders getting into office in all these countries. For this transitional period, if these countries could somehow find a way to make the partition of the maritime delimitation zones as well as exclusive economic zones in the Eastern Mediterranean which could allow the safe transportation of newly discovered hydrocarbon resources, that will be a huge gain for peace and stability in the region.

To conclude, I must say that British Foreign Secretary Dominic Raab’s positive messages about a possible settlement in Cyprus are normal in terms of diplomatic norms. However, in my personal opinion, current British interests might not favor a solution in the island. That is mostly related to a new era in British history that started after the Brexit. So, we will see how the new British foreign policy will evolve and will there be a place for close relations with Turkish Cypriots in the new term?