Turkish domestic politics is always dynamic and excited although the country has been passing through rather difficult times due to the Covid-19 pandemic and economic difficulties. In this context, it should not be forgotten that Turkey made a transition to hyperpresidentialism in 2017 via a controversial referendum[1] and Turkey’s next Presidential election will determine who will the ruler of the country on its 100th anniversary. That is why; the next Presidential election in Turkey is very symbolic and important for determining the spirit and the image of the country for the new (21st) century.  In this piece, I am going to share some of my observations and projections for Turkey’s next presidential election.

First of all, I should underline that the new political system Turkey adopted in 2017 transformed the post of Presidency almost into an “elected God” position with immense presidential powers and authorities that overshadow even the legislative powers of the Turkish parliament (Turkish Grand National Assembly-TGNA). Recep Tayyip Erdoğan, Turkey’s Islamist originated conservative Prime Minister since 2003 and President of the Republic since 2014, became the 12th President in its history, but also the first President within the new Presidential system in 2018. Recep Tayyip Erdoğan now has the power of executive orders or decrees to make laws and even to ratify or abolish international agreements. For instance, recently Turkish President abolished Istanbul Convention with a presidential decree. In that sense, the first thing to be stated about Turkey’s next presidential election is that it really matters since the post of Presidency is now the highest post in the system and has immense powers.

Secondly, the adoption of hyperpresidentialism in 2017 led to the birth of bloc politics in Turkey. Turkey’s governing AK Parti/AKP (Justice and Development Party) established the conservative-nationalist bloc of People’s Alliance (Cumhur İttifakı) with the ultranationalist MHP (Nationalist Action Party), and the BBP (Grand Unity Party) before the 2018 Presidential election. As a response, Turkey’s main opposition party, pro-secular and pro-European center-left CHP (Republican People’s Party) established its own bloc of Nation Alliance (Millet İttifakı) with the center/center-right İYİ Parti (Good Party), Islamist Saadet Partisi/SP (Felicity Party), and the center-right Demokrat Parti/DP (Democrat Party). In the 2018 presidential election, People’s Alliance won the election comfortably in the first round with Recep Tayyip Erdoğan’s 52.59 % of the votes. Nation Alliance did not present a joint presidential candidate; so, CHP’s Muharrem İnce took 30.64 % of the votes, whereas İYİ Parti’s leader Meral Akşener garnered 7.29 % and SP leader Temel Karamollaoğlu took 0.89 % of the total votes. Pro-Kurdish HDP (Peoples’ Democratic Party) leader Selahattin Demirtaş on the other hand became a candidate for his party and took 8.40 % of the votes. So, after the failure of the opposition in 2014 to endorse a joint candidate (Ekmeleddin İhsanoğlu who took 38.44 % of the votes against Erdoğan’s 51.79 % and lost the election in the first round), although this time the opposition tried to present more candidates to prevent Erdoğan to win in the first round, this strategy failed as well. This time it is still unknown whether the opposition will present a joint candidate or not. It seems to me that the opposition will again try to present many candidates in order to prevent Erdoğan to win the election in the first round. However, in case the limit for being elected in the first round is reduced to 45 %, the opposition parties might take risk and present a common candidate. 11th Turkish President Abdullah Gül could be an ideal candidate in that case. However, I do think that the Nation Alliance will not choose this strategy.

Thirdly, the timing of the election will be crucial. Normally, since the previous election was organized in 24 June 2018, the election should take place towards the end of June 2023, few months before the 100th anniversary of the Republic of Turkey.[2] However, since all sides want to take advantage of the situation and win this paramount election, President Erdoğan and his bloc might prefer to call for an earlier election in 2022 or early 2023 if public polls would convince him that he could win in the first round. 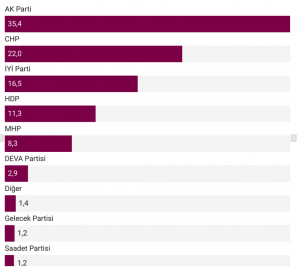 Current votes of the parties

Fourthly, current public polls prove that the next presidential election will be extremely competitive and very tough. According to Istanbul Ekonomi Araştırma’s March 2021 study[3], the ruling AK Parti/AKP still has 35.4 % support (when the indecisive votes are also added), which should be considered as a success due to very difficult socioeconomic conditions in Turkey related to the Covid-19 pandemic and economic crisis. Erdoğan’s partner Devlet Bahçeli’s party MHP has also 8.3 % support, which makes almost 44 % support for the People’s Alliance in total. The opposition (Nation Alliance) on the other hand seems to have equal chance this time with CHP’s 22 %, İYİ Parti’s 16.5 %, DEVA Party’s (Ali Babacan’s new party) 2.9 %, SP’s 1.2 %, and Gelecek Partisi-Future Party’s (Ahmet Davutoğlu’s new party) 1.2 %, which makes around 44 % support in total. These numbers prove that the government bloc should do something to increase its votes towards 50 % to win the election in the first round. Since the second round of presidential election will be a totally new experience for Turkish voters, I think President Erdoğan should seek ways to win it in the first round. By the way, İYİ Parti’s rise in recent months prove that Turkish people are open to alternatives and they primarily care about the trust towards the leader rather than ideological sharpness or consistencies (İYİ Parti is a populist center/center-right party with a strong and charismatic leader – Meral Akşener).

Fifthly, if we have to empathize with President Erdoğan, we can foresee that there will be important strategic political steps coming from the government in the next months. Obviously, President Erdoğan has to integrate more parties to his bloc in order to increase his support. The ideal party seems to be the SP, an Islamist party following the Necmettin Erbakan’s “national outlook” (Milli Görüş) tradition. Erdoğan already had a meeting with Oğuzhan Asiltürk[4], a very important name within this tradition although the party leader Temel Karamollaoğlu is against joining the People’s Alliance. So, there could be a competition between the government and the opposition from now on in order to acquire the control of SP leadership. Erdoğan’s decision to quit the Istanbul Convention in fact could be perceived as a way to impress SP voters since the SP is essentially an anti-Occidentalist political Islamist party. Erdoğan could also invite Erbakan’s son Fatih Erbakan to his party, since the young Erbakan recently established a new Islamist political party, New Welfare Party (Yeniden Refah Partisi)[5] that has the potential to steal some ten thousands of votes from Erdoğan’s bloc in some conservative villages and neighborhoods. Recently, a former CHP politician Mustafa Sarıgül also established a new centrist political party, Türkiye Değişim Partisi/TDP (Party for Change in Turkey). Sarıgül gives warm messages to President Erdoğan[6] and he seems like he is interested in joining People’s Alliance through political negotiations. Since all votes are important in a tight race, President Erdoğan and his party could make some strategic moves before the election.

Sixthly, I should admit that the opposition also has been implementing clever strategies to increase its votes. CHP leader Kemal Kılıçdaroğlu’s tactic is simple but it is working; that is to support new right-wing parties that would decrease the vote of the governing bloc. Kılıçdaroğlu first helped the birth and the progress of the İYİ Parti in 2017 and now gives strategic support to two new right-wing parties; Ali Babacan’s DEVA and Ahmet Davutoğlu’s Gelecek Partisi. These parties are expected to support the Nation Alliance and they would obviously take votes mostly from either the AK Parti/AKP (Babacan’s party and Davutoğlu’s party) or the MHP (Akşener’s party and Davutoğlu’s party). Especially Babacan’s party DEVA (Democracy and Leap Party) has a great potential if the AK Parti/AKP starts to fluctuate. In the meantime, although the CHP recently had a blow with the resignation of Muharrem İnce, who will soon start a new Kemalist political party called Memleket Partisi (Homeland Party), İnce’s support for the Nation Alliance and the CHP’s presidential candidate is almost guaranteed.[7] So, although İnce himself could become a presidential candidate and could take some portions of CHP candidate’s votes, in the second round it seems like he and his supporters will endorse the CHP’s and Nation Alliance’s candidate. It should not be forgotten that İnce’s rhetoric and speeches are very powerful and he could steal some votes from the governing AK Parti/AKP and MHP as well due to his nationalist/Kemalist political stance.

Seventhly, I think “who will be the CHP’s presidential candidate” is going to be the most important question/factor for the result of the next presidential election. CHP leader Kemal Kılıçdaroğlu acts like a modest political guru and does not engage in complexness. He previously endorsed Muharrem İnce’s candidacy in 2018. So, if the public polls show that CHP should definitely choose a specific candidate, Kılıçdaroğlu might not be his party’s presidential candidate himself. His party already supports a return to parliamentary system and if the CHP candidate wins the presidency, Kılıçdaroğlu might try to become Turkey’s Prime Minister within the new system. At this point, CHP has two strong candidates; Istanbul mayor Ekrem İmamoğlu and Ankara mayor Mansur Yavaş. While İmamoğlu is a pr (public relations) master and has a very good and clean image for both center-left, center-right, and Kurdish voters (he recently opposed to the banning of HDP as well), Yavaş comes from the MHP tradition (he has an ultranationalist background) and has an appeal towards the ultranationalist right in Turkey. According to a recent study made by Aksoy Araştırma, both Yavaş and İmamoğlu could win against Erdoğan in the next presidential election; with Yavaş does slightly better than İmamoğlu.[8] In case CHP shows a weak candidate (not Yavaş or İmamoğlu), it is also possible that Meral Akşener might take the lead of the opposition and could have the second seat after Erdoğan in the first round of presidential election. In that case, whether Akşener could beat Erdoğan in the second round is very dubious. Yavaş and Akşener’s biggest disadvantage is that they might not motivate Kurdish voters to go to polls against Erdoğan. İmamoğlu on the other hand has a better image and high chance concerning Kurdish voters. That is why; İmamoğlu could be the ideal presidential candidate for the opposition.

Lastly, I should state that the next Presidential and parliamentary election in Turkey will be about the spirit and the future of the country. If Erdoğan and his bloc wins, Turkey will be headed towards a more independent, but also more Islamist and nationalist future whereas if the opposition wins, Turkey will probably have a more democratic and Western-oriented future. I’m hoping that all sides and political actors will be respectful towards other groups’ ideas, freedoms, and rights and will try to make Turkey more democratic, developed, and stable.

[1] There are controversies about the referendum since the constitutional changes were approved by only 51.41 % of the people and opposition parties claimed that there were fraudulent activities during the election.

[2] The Republic of Turkey was established on October 29, 1923 by Mustafa Kemal Atatürk. This date is still celebrated with official ceremonies in Turkey as the “Republic Day”.

MORE THAN 5,000 PEOPLE KILLED IN MAJOR EARTHQUAKES IN TÜRKİYE AND SYRIA