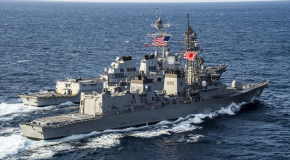 JAPAN-US MILITARY-POLITICAL ALLIANCE: FROM ‘NUCLEAR UMBRELLA’ TO ‘ALLIANCE OF HOPE’

It is no secret that Japan is a nation that exerts significant influence upon the geopolitical and geo-economic processes around the world and the vast Asia-Pacific region in particular. The posture of the U.S.