A year or so month ago, Mexico, Indonesia, (South) Korea, Turkey and Australia came together in New York on 25 September 2013 on the side-lines of 68th session UN General Assembly to set up a new initiative, as called MIKTA, coming from the first letters of the members as an informal and non-exclusive group of ‘middle powers’, cooperating to address some of the diverse challenges of an increasingly complex international environment. According to the Russian Council’s view, the establishment of such a diverse community was initiated by South Korea. They relate this to South Korea’s former initiatives in sense of ‘middle power’.

MIKTA works at two levels: as a forum for like-minded countries to discuss and collaborate on issues of common concern and as a chance for bilateral side meetings to consult on specific issues. The first meeting of MIKTA on 25 September 2013 was devoted to discussing the benefits of dialogue among their countries. Throughout the second meeting on 13 – 14 April 2014 Ministers discussed the current international political situation. The next meeting will be in South Korea in the first half of 2015.

Commonalities shared by the members

Territorially, the five states are distant apart from each other but they have some similar characteristics. For example, each of the members is committed to democracy and the rule of law, and each is influential in their regions. In Indonesian press, the members are all seen as “bridge countries” in their respective regions. They are members of the G-20. They represent open economies; have strong domestic markets, moderate inflation and populations with rising purchasing power; are developing resilient economies with potential for high growth rates, while consolidating democratic processes. They enjoy democratic pluralistic systems. Also, they are all either formally or informally allied to the United States.

MIKTA countries totalise a population of over 500 million people, a GDP of 5.6 billion USD and 1.5 trillion in trade. To make this aspect more effective, the initiative is based on a common interest in strengthening multilateralism by supporting worldwide efforts for stability and prosperity, facilitating pragmatic and creative solutions to regional and international challenges and implementing the needed reforms in global governance structures. The members try to contribute regional and global peace and stability. As South Korean statesman Lee Kyung-Soo said that “MIKTA tries to be a useful facilitator in addressing global issues, a consultative body contributing in creative ways to the development of multilateralism, and an agenda-setter for the shaping of new global governance. It concentrates on pursuing the similar constructive approaches in the face of international challenges.”

José Antonio Meade, Minister of Foreign Affairs of Mexico said that “in a rapidly changing world, power, authority and wealth are diffusing from traditional centres to a wider sphere. Globally, this diffusion is leading to increased shared benefits, but also more responsibility. In this context, it is no surprise that a new tendency in global governance is to find spaces for regional dialogue on relevant issues. What brings MIKTA countries together is the functional need to cooperate, coordinate and work constructively with each other and other states in the face of global and regional challenges concerning us all. The MIKTA platform can fill an important gap in the international arena. We will remain engaged in taking forward this important initiative and advance a constructive role for it within the international community.”

In an interview, Mexican Ambassador to South Korea Jose Luis Bernal said that “Within the G-20, the larger economies make decisions without consulting with everyone else. We as MIKTA countries are trying to increase the volume of our voice. Your voice cannot be heard if you are speaking by yourself.”

Ministry of Foreign Affairs of Turkey explained the aim of MIKTA on its website as “Foreign Ministers stated that the MIKTA is an initiative which can make an important contribution to regional and international peace and can reflect the conscience of the international community.”

In this sense, together, MIKTA members ought to have the potential for more serious impact in international fora than they would have alone.

Under the informal agreement, the five regional powers will hold regular consultative meetings to improve their cooperation based on similar economic development and global political leverage.

The MIKTA group held its first foreign ministerial meeting on 25 September 2013 on the side-lines of 68th session UN General Assembly meetings. Former Minister of Foreign Affairs of Turkey Professor Ahmet Davutoğlu attended the first meeting on behalf of Turkey along with the Foreign Ministers of Mexico, Indonesia, South Korea and Australia.

In the next step, the second but first formal meeting “Informal Meeting of Foreign Affairs Ministers” in which Mexico was the first to hold the rotating chair took place in Mexico, on 13 – 14 April 2014. This meeting was expected to make important contributions to promoting the initiative as well as MIKTA members have issued a joint declaration encouraging North Korean denuclearization on April 14 and another joint statement on July 26 condemning the tragic downing of Malaysian Airlines Flight MH17, which killed 298. Moreover, the Ministers discussed the way forward for MIKTA and major global security issues, including the situation in Ukraine.

According to the information about the second meeting on the website of the Ministry of Foreign Affairs of South Korea, “the ministers discussed the ways to work together on key issues in the international community concerning global governance, including post-2015 development agenda, cyberspace security and climate change.”

An academic seminar by SAM

On 9 September 2014, an academic seminar co-hosted by the Centre for Strategic Research (SAM) of the Turkish Ministry of Foreign Affairs and the Embassy of Mexico on MIKTA was held in Ankara Palas Hotel with the participation of about 120 people from media, civil society, think-thanks, academia and diplomatic corps as well as SAM’s former interns.

According to the information on the website of SAM, “At the seminar, moderated by Prof. Dr. Ali Resul Usul, chairman of SAM; Ambassador Ayşe Sinirlioğlu, Deputy Undersecretary for Economic Affairs of the Turkish Ministry of Foreign Affairs and Turkish G-20 Sherpa; Martha Bárcena, Ambassador of Mexico to Turkey; Nahari Agustini, Ambassador of Indonesia to Turkey; Lee Sangkyu, Ambassador of the Republic of Korea to Turkey and James Larsen, Ambassador of Australia to Turkey discussed the purpose, importance and future evolution of MIKTA. The Seminar was useful in terms of promoting MIKTA and explaining its purpose.” 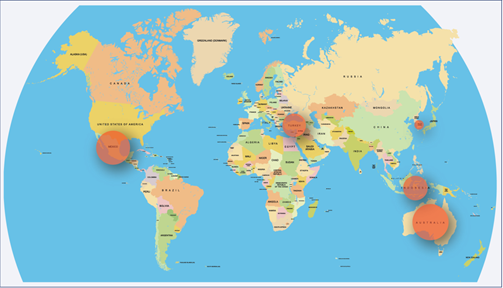