Democratic Party presidential nominee and former Vice President (2009-2017) Joe Biden entered into the Oval Office at the White House in late January 2021 as the 46th President of the United States of America. During his early days at the office, President Biden deals with reentering into international agreements (Paris Climate Deal) and organizations (World Health Organization) which the U.S. left during Donald Trump’s Presidency (2017-2021).[1] Biden team was also successful in making a new START (Strategic Arms Reduction Treaty) deal with Russia for 5 years.[2] However, unlike his predecessors who called Turkish Presidents in their early days in the office, Biden so far did not call Turkish President Recep Tayyip Erdoğan. This could be interpreted as a conscious negative reaction of the new U.S. President against Turkey, a country that has been harshly criticized in the Western hemisphere of the world in recent years due to the quality of its democracy and respect for human rights and rule of law. Moreover, during his Senate hearing, the new U.S. Secretary of State Antony Blinken referred to Turkey as “our so-called strategic partner” by criticizing Turkey’s acquisition of S-400 air missile defense system from Russia.[3] So, it would not be wrong to claim that early signals of Biden era are not promising for a fresh start in Turkey-American relations. However, I do think that a fixation of bilateral relations is still possible during Biden era for several reasons. In this article, I’ll try to summarize potential advantages and pitfalls in Turkish-American relations during Joe Biden’s presidency. But before that, I’ll try to explain Biden Doctrine by looking at the earlier deeds and statements of the new U.S. President.

Joe Biden has become the oldest, but at the same time wisest and the most experienced U.S. President ever. Biden has a deep knowledge about American foreign policy and especially about Turkish-American relations. Mr. Biden has also a clear understanding of world politics in terms of his insistence on democracy and human rights. He is ideologically situated somewhere between liberalism and social democracy and represents the center within the Democratic Party tradition. Although he is very determined on democratic practices and human rights issues, at the same time, the new U.S. President represents a moderate pragmatism that is absolutely necessary for petty politics and international relations. That is why; in my opinion, President Biden’s idealism is limited with core American interests and his nationalism (realism) expands till widely accepted international rules and decisions. We can clearly assert that the Biden Doctrine will be based on the defense of democracy and human rights and it will basically advocate a close cooperation between democracies around the world. Biden, during his Presidential campaign, wrote an article for Foreign Affairs magazine and promised to hold a Democracy Summit.[4] His choice of Antony Blinken, a liberal interventionist, as the new U.S. Secretary of State also could be interpreted as a strong signal of his foreign policy that will be strictly based on democracy.

First advantage of Joe Biden as a U.S. President who could positively contribute to Turkish-American relations is that, President Biden knows Turkey and Turkish-American relations very well. For instance, he visited Turkey in 1980, few months before the military coup as a young Senator and had meetings with Turkish political and military leaders.[5] During Barack Obama era also, he had visited Turkey four times and he was one of the architects of Obama foreign policy as an influential Vice President. 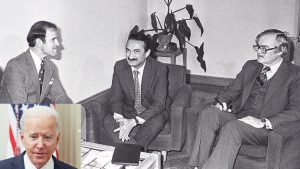 Second advantage of Joe Biden for Turkish-American relations is that he has personal and intimate relations with Turkish President Recep Tayyip Erdoğan. President Erdoğan is an Oriental type politician that cares about personal ties and acquaintances in foreign policy and domestic politics. So, Biden’s close relation with Erdoğan is an asset for the new term. Although President Biden, as everyone approves, has less place for personal and transactional relations in foreign policy and he wants to conduct a foreign policy that is based on institutions (U.S. Department of State, Pentagon etc.), dealing with Turkey and the Middle East, he will definitely need personal relations. So, Biden-Erdoğan acquaintance (in fact even as couples they know each other) is an advantage for the new term.

Thirdly, President Biden was the Vice President of 44th President of the U.S. Barack Obama and during Obama’s term, American foreign policy towards the Middle East was largely shaped by the idea of the creation of pro-Western Muslim democracies and liberal monarchies in the MENA (Middle East and North Africa) region. In accordance with this policy, Turkey was chosen as a “model country” that could guide other Muslim nations to democratize and to have friendly relations with the U.S. and the European Union (EU). Although this policy failed due to the devastating effects of the Arab Spring and American support for military regimes, it is a fact that Biden’s insistence on democracy and Democratic Party’s political tradition that favors democracy more than Republican Party might revitalize this trend. However, here the most important problem seems to be Turkey’s recent shying away from full democracy. But since the quality of Turkey’s democratic regime has fallen in recent years as a reaction to failed military coup attempt in 2016, Syrian civil war’s negative effects, and American support for military take-overs (such as in Egypt in 2013 which Obama and John Kerry welcomed) in the region, a return to democracy rhetoric will be in fact in the benefit of both countries.

There are also some pitfalls and disadvantages for Biden era in terms of Turkish-American relations. First of all, President Biden is supported by some lobby groups that have historically anti-Turkish stance. Armenian lobby and Greek lobby are the most influential ones among these groups. In recent years, Jewish lobby or Israel lobby also began to work against Turkey due to Turkish-Israeli disagreements in the Middle East. So, these groups will try to prevent Turkish-American relations to develop during Biden era because of their ideological prejudices and historical enmities against Turkey. That is why; Turkish-Israeli rapprochement could be a positive factor for Turkish-American relations as well during Biden era. 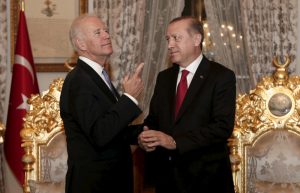 Secondly, President Biden and his party’s idealism might not work efficiently in the case of Middle East since there are clear and present dangers such as terrorist groups and radical movements. It is a fact that secular dictators or military regimes cannot provide stability and progress for their own people or for their Western allies, but so far alternative paradigms also could not be efficiently developed. That is why; dealing with Sultans and Generals, President Biden should act more realistically when it comes to the Middle East. Moreover, President Biden should understand that it is in fact United States that has historically supported anti-democratic military and monarchical regimes in this region and Turkey is still the second best democracy within the region after Israel.

Thirdly, President Biden, during the early days of his bid for Democratic Party presidential candidacy (in December 2019), in a meeting with New York Times journalists, told that he would support opposition in Turkey in order to change Erdoğan in a democratic process.[6] This was later heavily criticized by pro-government circles in Turkey[7] and Turkish government clearly supported Donald Trump in the 2020 U.S. Presidential election. So, two countries need to make a fresh start in order to get rid of these earlier disappointing statements.

Finally, although early signals are not very promising for Biden era in terms of Turkish-American relations, I still think that we have to be hopeful for the near future. I have two main arguments for this hypothesis. First of all, since the United States is in clear decline in recent years in the world affairs and it wants to focus on Asia-Pacific region in order to engage more with China, losing Turkey would be a great risk for American interests in the Middle East. It is a fact that the loss of Iran by President Jimmy Carter in 1979 greatly harmed American and Israeli interests afterwards. So, the loss of Turkey will make the U.S. a less influential actor in the region and it will only empower the anti-American bloc. That is why; I do think that President Biden and his team will give Turkey a chance to fix relations. Secondly, due to recent confrontations with the U.S. and the EU, Turkey has also put itself into a difficult situation with endless political problems and alarming economic signals. That is why; it would not be surprising for Ankara to seek ways to improve relations with the United States in the following months. Moreover, President Erdoğan is a political mastermind who knows that he could not get reelected during an economic crisis. So, I do think that President Erdoğan will seek to improve ties with Washington and Brussels for his own political survival as well. In this regard, I think two administrations will soon start contacting each other again for bilateral issues as well as regional problems.