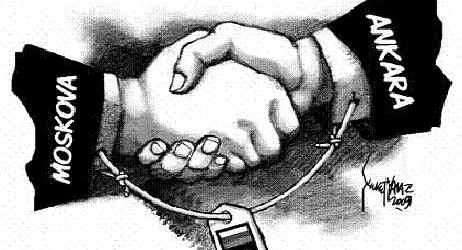 Abstract: The political relationships between Turkey and Soviet Union commenced in the years when Turkey was fighting against the intruders in Independence War. After signing the nonaggression treaty, the cultural relationships between these countries began developing. This process was accelerated by the activities of The Society of Cultural Relationships with Soviet Union (VOKS) which was founded in 1925. Later then, mutual activities were ascended distinctly in many fields including cinema, music, theatre, painting and sculpture. After the foundation of The Society of Cultural Relationships beyond Caucasus (ZOKS), the cooperation in education and science between Turkey and Soviet Union was stepped up.

The political relationships between Turkey and Soviets commenced in the years of Independence War when Turks fought for their independence in the leadership of Mustafa Kemal (ATATÜRK). The Turkish and Soviet Nations initiated a cooperation and assistance process against the dominant western countries which impede their independence and right of life. After the foundation of Turkish Republic and the Union of Soviet Socialist Republics, good relations from education to science and from sports to culture between these two countries expansively continued.

In 1925, The Society of Cultural Relations of Soviet Union, which was named as VOKS in short and leaded by O.D.Kameneva, was founded in Moscow to develop cultural relations between Soviets and other countries. VOKS performed activities such as artist exchange, meetings with foreign artists, arranging evening parties, art exhibitions, and works in arts to introduce and extend the formal soviet ideology to foreign countries. The cultural relations between Turkey and USSR were mainly concerned by this foundation.

After the foundation of Society of Cultural Relations of Ukrainian Soviet Republic, shortly VUOKS and Society of Cultural Relations beyond Caucasus (ZOKS) in 1928, the cultural/scientific relations between Turkey and Soviets were carried out by these three foundations. The activity area of ZOKS was to establish and develop the cultural and scientific relations between Russia, Azerbaijan, Georgia, Armenia and Iran, and especially Turkey.

Signing a new nonaggression and friendship treaty between Turkey and USSR in 1925 accelerated the cultural relations between these two countries. Within this period, the match between the national football teams of these countries can be accepted as the commencement of cultural relations.

In this study, the cultural relations on some issues including various art disciplines and partly education between 1925 and 1935 were evaluated in the light of Turkish and Soviet references.

1. The Relations in Education/Science

The Soviet Republics beyond Caucasus, mainly Azerbaijan Soviet Republic, have a major role in the development of scientific relations between Turkey and Soviets. Soviet Republics provided remarkable support, especially in the field of pedagogy, for the educational reforms which Turkey undertook in 1924. By 1925, Turkey benefited from the books, pedagogic materials, plans and syllabus which were providen by Soviets and written in Azerbaijani for the arrangements of public education.[1]

By 1925, many Soviet scientists came to Turkey to learn about Anatolia and Turkish people. They traveled in Turkey, performed scientific works and published some of them when they returned to their own country. Some of these scientists were P.M.Jukovskiy, V.V.Barthold and P.Pavlenko.[2]

In 1926, a group of educationist leaded by Mr. Atıf Kansu, undersecretary of The Ministry of Education, came to Soviets for a trip of 45 days and made observations in Moscow, Kiev, Odessa, Azerbaijan and Turkish Republics in middle Asia. They learned about Soviet pedagogy and get many course books, brochures and educational materials.

After the foundation of ZOKS in 1928, the relations on education and science between Turkey and Soviets further increased. By 1928, exchange of scientific books, journals and newspapers accelerated. ZOKS sent to Turkey 97 books concerning with agriculture, health and industrial production in 1929. Of these books, ones written in Russian, Georgian or Armenian were translated into Azerbaijani before sending to Turkey.

Within the above mentioned period, the books, especially ones about pedagogy, which were sent to Turkey, were demanded from the ZOKS by the consulships. Amongst the books sent from Soviets in 1930, 10 methodological books on education of nursery class students and 6 books on children education are examples of this situation. In the same year, an atlas and course book were demanded to use in geography course, thereupon the Education Ministry of Azerbaijan sent to Turkey 7 geography books and a globe atlas written in Azerbaijani. Besides, the first volume of “Economic Geography beyond Caucasus and General Geography” which was published in Baku in 1930 was donated as a gift.

In 1930, ZOKS sent to Turkey 450 books on various subjects and written in Azerbaijani, and VOKS sent 311 books written in Russian, Georgian, Armenian and Azerbaijani. After 1932, some magazines and newspapers were also interchanged between these two countries. The newspapers sent from Turkey included Cumhuriyet, Akşam, Vakit, Milliyet, and Hâkimiyet-i Milliye.

The scientific cooperation between Turkey and Soviets was not only book interchange. Because Mustafa Kemal Atatürk wanted to benefit from Soviet experts, some principal Soviet turkologists such as Marr, A.N. Samayloviç and İ.İ.Meşeninov were invited to Turkey or their books were translated into Turkish.

2. Relations in the field of Cinema

The visit of O.D.Kameneva, head of ZOKS, to Turkey in the spring of 1927 was important for developing the cultural relations between Turkey and Soviets. O.D.Kameneva took the opportunity to meet many Turkish senior public officials and artists during this visit[3]. In consequence of the meetings, arrangement of a Soviet exhibition and film festival in Turkey in 1927 was decided1. Many significant Russian films including those of Pod Vlastu Adata and Abrek Zaur, and “Bronyenosyets Potyomkin” that was produced in 1925 by the famous Russian director Sergey Eyzensteyn (Sergei Eisenstein) were shown in this festival.

Muhsin Ertuğrul who is one of the pioneer directors of young Turkish Republic and has a significant role in development of Turkish cinema, visited Moscow in 1925 and took the opportunity to learn about novel techniques and developments in Russian cinema, to meet Russian directors and to study with them[4]. He also did internship in Moscow Art Theatre and directed two story films in Odessa Cinema Factory. After spending two years in Russia, Muhsin Ertuğrul returned to Istanbul in 1927, and transferred the knowledge and experiences that he gained in Russia[5].

Russian director Sergey Yutkeviç and a group of filmmakers came to Ankara in 1933 upon the invitation of Turkey, and worked on a documentary film in remembrance of 10th year of Turkish Republic. At the end, the documentary film named “Ankara-Sertse Turtsii” “Ankara-The Heart of Turkey”, which is about The War of Independence and later developments coming with republic, and in which Turkish-Soviet cooperation was referred, were produced. Moreover, Efsir Şub came to Turkey in 1934 and directed a documentary film named “Development Steps in Turkish Revolution”.

3. Relations in the field of Theatre

Münire Eyüp who was approved to be an expert in the field of theatre in the years between 1920‒1930, visited Moscow in 1926. She took the opportunity to meet the actors and actresses of Soviet theatre, and also took lessons from famous Soviet actor Mayerhold in Moscow. Münire Eyüp was the first Turkish actress visiting Moscow.

After 1930, the cultural relations between Turkey and Soviets developed further, thanks to the efforts of Mr. Surits, the Soviet Ambassador of Ankara, and L.M.Karahan, the Public Commissar of Soviet External Affairs. The mutual visits of theatre actors were increased in this period. Turkish musicians and theatre actors visited USSR and Bolshoi Theatre visited Turkey. The Bolshoi Theatre stayed in Turkey for one and a half month, and presented 23 performances, of which 15 in Ankara, 3 in İstanbul and 3 in İzmir[6].

The relation in music between Turkey and Soviets began to develop by 1930. A concert was performed in Moscow State Conservatoire in 1933 in remembrance of 10th year of foundation of Turkish Republic, and this concert was listened alive in Turkey by radio. The compositions of Turkish musicians such as Ulvi Cemal and Ekrem Zeki were also included in the concert. Upon the invitation of VOKS, some Turkish musicians including Ekrem Zeki, Ulvi Cemal and Cemal Reşit visited Soviets in 1934. Zeki Bey, the head of Presidential Band, and Ekrem Zeki, a composer and violinist, performed a series of concerts in Soviets in the spring of 1934. A group of musicians from Bolshoi Theatre came to Turkey and performed the compositions of Russian classical music masters such as M.I.Glinka, P.I.Çaykovski, N.A.Rimskiy-Korsakov, A.P.Borodin, M.P.Musorgskiy, A.A.Alyabyev and R.M.Gliyer in 1935.

5. Relations in Painting and Sculpture

There became significant developments for the relations in the fields of painting and sculpture in 1934. For example, famous Russian artist Gerasimov visited Turkey and Turkish artist Abidin Dino invited to Soviets to study in Leningrad Cinema Studio. In the same year, an exhibition of 47 paintings belonging to some famous Soviet artists including F.Bagorodskiy, P.Vilyams, I.Brodskiy, A.Deyneki, A.Kuprin, K.Petrov-Vodkin, Samohvalov and M.Saryan were held in Ankara[7].

Exhibitions of Modern Turkish Paintings were held in various cities of USSR in 1935. The famous Turkish artist İbrahim Çallı appeared in the opening of this exhibition and gave a speech to colleagues and press about the status of art in Turkey. The artists participated in this exhibition took opportunity to meet Soviet colleagues and to examine their studios.

ARE GREECE AND TURKEY HEADING TO A WAR?