Since the beginning of nuclear research studies in Iran, this issue has been a controversial one. From its initiation by the assistance of US and Western states’ in late 1960s until 1979 Islamic Revolution, the Shah administration heavily supported the development of this program. However, after the revolution, Khomeini and his proponents strongly opposed the nuclear program and they emphasized that this program was superfluous due to their country’s possessing abundant oil and natural gas resources. Hence, they totally suspended the implementation of a nuclear program in their country.

It appears that the hard-liners in Iran perceive threat from their neighbor countries such as Israel. Besides, the United States’ policy having every option is on the table, including a military intervention, is pushing the hard-liners towards developing a nuclear program in order to provide Iran with a deterrent power. On the other hand, due to technological insufficiencies in their oil industry, which constitutes a significant part of Islamic Republic of Iran’s budget, Teheran lacks to meet the its own rising domestic energy consumption demand. So, they plan to use the nuclear energy to generate electricity. Another economic reason behind is the rising oil prices every passing day, as Iran would like to use this asset as a profitable export mean.

The hard-liners, including President Ahmadinejad himself, state that as being party to the Nuclear Non-Proliferation Treaty, it is Iran’s legitimate right to develop a nuclear program, as long as it remains in the civilian domain. They have been reiterating that their current nuclear program does not aim the nuclear weapons production. They also emphasize the international community’s silence about the nuclear arsenals of Israel, Pakistan and India. 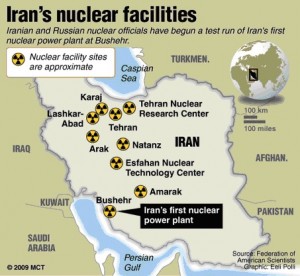 The reformers in Iran defend the idea that the policy followed by their incumbent government has serious repercussions on the daily lives of the Iranian people and also on the foreign policy of the Islamic Republic of Iran. They believe Iran has to find a compromise on the nuclear issue for its own sake. Their views about the nuclear program can be evaluated as logical. They are right when they say that insisting that much for building up a nuclear program does not serve the Islamic Republic of Iran’s interests in the domestic political scene or in the international arena. In this context, Iran’s stubbornness about the nuclear program calls for more international sanctions and the ordinary Iranians suffer from them.

The claim that possessing nuclear weapons do not serve the national interests of the Islamic Republic of Iran seems logical. It’s obvious that the nuclear project didn’t make the Islamic Republic of Iran a much safer country so far, in fact the contrary seems more correct. The hard-liners’ insistence on building up a nuclear program increases the risk of isolation and containment of the country. In addition, this program has given the US the justification to gather an anti-Iran coalition. Now the United States endeavors using every possible mean from the economic sanctions to the threat of use of force and so on, to stop Iran’s uranium enrichment program. Nevertheless, the reformers’ suggestion of finding a compromise and even the total suspension of the program is only possible if the hard-liners agree with this policy. Due to hard-liners’ current stance on developing a nuclear program, the reformers’ policy of finding a compromise is out of question as of today.

The majority of the people in the Islamic Republic of Iran agree with the views of hard-liners’ on developing a nuclear program. They are convinced that having the nuclear technology is an indispensable right given the fact that Iran is party to the Nuclear Non-Proliferation Treaty. They also think that by developing a nuclear program they will retrieve their honor and they will have a more prestigious status in the international scene.

As a final comment, one can say that Iran’s nuclear program has been debated for a long time and it will continue to be discussed in the near future. Today it seems that the hard-liners have the upper hand in this discussion. As long as they keep control of the power, this situation will persist as it is.