DOES IT MATTER WHERE POINTS DALI’S ANDROGYNOUS TO?

Salvador Dali painted “Geopoliticus child watching the birth of the new man” in 1943, when bloody and cold winds of the World War II started to relent giving place for hope for the new future. Everybody more or less sophisticated in the art knows the ensuing storyline. 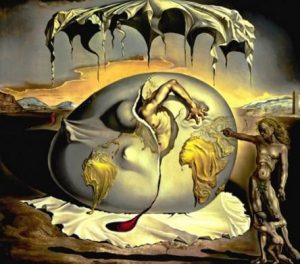 Geopoliticus child watching the birth of the new man

What is the less known in the Western Hemisphere is the surmise some painting enthusiasts in Azerbaijan adhere to that the androgynous on the picture points actually to the Azerbaijani shore of the Caspian Sea. The whole story runs with the Georgian and Armenian researchers arguing mysterious creature points to the Georgia or Armenia correspondingly. Also some unionists call to stop quarreling as the creature is wise enough to indicate South Caucasus region in tote. Well, androgynous points to the nascent man bursting through the North America, the way genius Spaniard had intuited United States rising up to the world leadership in the glow of the finishing war. However, the semi-facetious story above reflects not only significance small countries conjure, but also that angle of the view matters. Same holds true for the geopolitics.

Back in 2003, many western-minded intellectuals in the region celebrated American-led invasion in Iraq predicting fall of the dictator regime would play domino effect for the rest of countries opening doors wide to democratic changes and default prosperity. The general wisdom was kind of, “at least America did that for Japan in the wake of the World War II, why should it be impossible in this case?” It has been actually playing domino effect since then, demolishing one country after another.

But we also had predictions exactly foretelling last scenario. Back then, one colleague, being told that “new-Japanese theory” retorted exasperatedly: “Be ready to pay high price for such comparisons”. Omnis comparatio claudicat. He was not surely alone.

Looking retrospectively, one can assume 2003 was the year when worldwide support and admiration for the United States’ modus operandi reached its peak and stealthily started to decline. For example, when President Obama, the man who is widely believed to be competent and compassionate, tries to persuade international audience today that America is interested in united and democratic Syria, he faces challenges Mr. Bush could barely imagine. The audience has changed seriously. Today’s world is the reality where Russia Today’s or Al Jazeera’s broadcasting competes efficiently with the most advanced West storytelling machines. Soviet’s propaganda had been less effective back in 80’s. Thus, the new emerging powers pick up somewhere West and America dropped part of the credibility. What did go wrong? “It’s as much our fault as it is the fault of the Russians, at least originally,” says William Perry, who served as Defense secretary from 1994 to 1997.  “And it began when I was secretary.” Perry, who was speaking to reporters at a roundtable hosted by the Defense Writers Group, also argued the United States has done plenty over the last 20 years that caused Russia to feel disrespected.

It is not only Russians or Middle East countries who grew incrementally disillusioned. Sylvie Kauffmann, the editorial director and a former editor in chief of Le Monde, calls Central European countries illiberal democracies of Europe, noticing steady rise of radical right-wing parties and xenophobic moods. It would be hard to imagine such epithets tagged at European Union and NATO member countries decade ago. But underlying causes are not illogical or surrealistic. Quite opposite, they are solid. Today’s anti-western sentiments root in yesterday’s pessimistic forecasts that have come true or appear so. Indeed, one must deal with the fact western interventions have not brought inevitable democracy and sound economic management, but rather chaos and anarchy still shattering societal linkages. Therefore, modern euro-skeptics and fringe politicians gaining prominence are the scions of the gloomy foresights on effectiveness of cooperation with West made years ago that went mostly subdued internally and unnoticed abroad.

By contrast, promises liberals in developing countries had made have been never fulfilled. For instance, first program Russian economists Stanislav Shatalin and Grigory Yavlinsky had drafted for the Soviet economy to transition to the market economy in 1990 promulgated 500 days of reforms needed to start thriving in union with West. After 26 years, contemporary Russian liberals still talk about bureaucratic soviet-style like economy to be dismantled to reach authentic market economy and announce new and new programs in contours so similar to “500 days”. But people generally turn backs now and it is hardly Mr. Putin to put blame solely on for the overhang of the nationalistic, anti-western agenda.

When it comes to small countries like Azerbaijan, problem is twofold. Firstly, as seen above, democratic, market-oriented transition is intricate and opaque process itself. Secondly, geopolitical context often crams small countries in awkward position between superpowers rivaling in the region. In the case of Azerbaijan latter is aggravated by the fact of protracted occupation of its lands by neighboring Armenia, making approaching task even harder. Most recent military escalation in the occupied region brought two countries on the verge of full-fledged war while also demonstrating fragility of current cease-fire status quo and insufficiency of international peace makers’ efforts.

West had been supposed to leverage support to facilitate transition for the post-soviet countries. That three-fork support had political, financial and technical assistance dimensions. Examples of Georgia in 2008 and Ukraine now demonstrate limits of the political tools West can exploit to protect Euro-Atlantic choice of the partner countries should the Russia find it challenge to its security concerns. Financial support rendered usually through the World Bank and IMF has been both scanty and ill-designed. It had gone as a rule tied with the obligatory recommendations that were deaf to local circumstances and triggered social unrest rather complicating decision-making for governing elites. In turn, technical assistance mechanisms comprised of advisory expert teams settled in local ministries have been never adequate replicating North African templates for Central Asia countries and vice versa. Wordy reports proposed too cursory recipes devoid of local context and all told, financial and technical assistance was not useful enough to jumpstart post-soviet economies. Moreover, John Hudson and Paul Mosley from University of Sheffield in research paper of 2007 underline aid volatility, meaning instability of aid flows from developed countries has been only increasing last 40 years adding to the inefficiency.

Coming back to the Dali’s picture, angle of the view is important, to be sure. Developing countries should understand their angle and position of view could result in distorted picture. But even before fixing views, one should make certain we all are looking at the same picture still. In the context of the geopolitics it means to attest are the United States and broadly West acting out of impetus to back democratic sustainable societies in transitioning countries or motives are somehow different. As Halil Karaveli puts it in New York Times, “Ultimately, the question is as “how much does NATO stand for the values that it is officially committed to?”

Eventually, in case of West committed to the goals declared officially, angle of the view is guilty and developing countries should fix own views first, what implies at least quitting conspiracy theories and stopping to blame West on every occasion. If the second alternative is true, all conspiracy theories and pessimist forecasts developing countries are engulfed in, will continue to bush out and gain ground until everybody outside sees picture America is looking at and gets ensured picture is, yes, different, but, hopefully, not so dangerous.