Ahmet Ceylan: Can you introduce yourself to our followers?

Marian Karagyozov: My name is Marian Karagyozov (it is pronounced Karagözov). I have a degree in Middle East Studies from one of the universities in the Bulgarian capital Sofia. I am currently putting the final touches to my PhD thesis, which -not surprisingly- is on the Turkish Foreign Policy in the Middle East (I still have to defend it!). I am currently serving as the correspondent of the Bulgarian National Radio to Turkey (in Istanbul). Moving to journalism was a natural progression to what I had already been doing – giving interviews, working closely with the media on political talk shows and participating in discussions on the political situation in Turkey.

Ahmet Ceylan: How do you feel about living in Turkey as a foreign journalist?

Marian Karagyozov: On the practical side, Bulgarian and Turkish cultures are very similar, even the cuisine is almost the same. It wasn’t difficult for me to adjust; but I have to admit that I used to visit Turkey on a regular basis for conferences and tourism long before I moved here as a journalist. This made the transition relatively smooth. I say relatively, because there is one thing I didn’t expect. Many people try to overcharge me and other foreigners about simple things; but the good thing is that the longer I stay, the easier for me to find out when this happens. I am lucky that I speak Turkish. It is a challenging, yet exciting job. Being the BNR person on ground, I have to prepare news on a daily basis about Turkish politics, economy, visits of foreign dignitaries, etc. I am also preparing interviews and radio materials for our programs on all kinds of topics, not only politics, but also culture, festivals and society etc. While doing this, I met many different people – from musicians on the streets to writers, scholars, and politicians. Recently, the website Diken published a couple of interviews with foreign journalists living in Turkey. They were both in English and Turkish. All are interesting and your readers can read these pieces. To sum up my experience, I did not face problems while doing my work here. 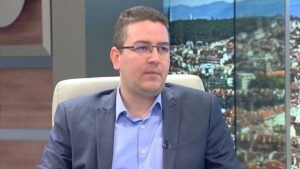 Ahmet Ceylan: What do you think about Turkish politics? What is your opinion about the last local elections?

Marian Karagyozov: Let me say that your question is not an exception. Turkish people are very curious what foreigners think of their country and very often they ask about my opinion on the events I cover – political party rallies, protests, demonstrations etc. I am of the opinion that people are always very excited about the elections. In my view, this is partly due to the long tradition of multi-party elections in Turkey. Turkish politics is very dynamic. I think this is one of the reasons why it is so interesting for me and my colleagues. But I have to be impartial and reach out to different segments of Turkish society. I sincerely believe that if you approach people with open-mind and readiness to understand their point of view, not to judge, it is beneficial for all sides. In recent years, there have been enough opinion polls and surveys, showing that Turkish society is polarized; meaning there are significant cultural and social differences between various groups. Knowing this, I have to be very careful when I interview people because our listeners in Bulgaria may not necessarily be aware of the local specifics and my job is to create a detailed and unbiased picture by providing as many viewpoints as possible. This is not always an easy task.

Ahmet Ceylan: How do you evaluate the relations between Turkey and Bulgaria?

Marian Karagyozov: The bilateral relations are good. In recent months, we passed through some uneasy moments; related to the remarks made by the Turkish Minister of Foreign Affairs Mr. Mevlüt Çavuşoğlu, who claimed that Turkey had intervened in the amendments of a particular law in Bulgaria in order to protect the rights of the people of Turkish origin there. This caused a serious Bulgarian reaction and the Bulgarian Foreign Minister insisted on an apology. Later on, Mr. Hami Aksoy, the Turkish MFA spokesperson, explained that this was a mistranslation. Despite this escalation, I believe that the foundations of the bilateral relations are strong. Last year, Bulgaria hosted a summit between the Turkish President Recep Tayyip Erdoğan and the Presidents of the European Commission, that is the government of the EU, and the European Council (the forum of the heads of the states or the governments of the EU member-states) Jean-Claude Junker and Donald Tusk. The volume of the trade between Bulgaria and Turkey is more than 4.5 billion USD. There are many platforms for trans-border cooperation on a national level and in the Thracian region in particular. We have many people with dual citizenship and they form a strong bond and a bridge between our countries.

Ahmet Ceylan: What is the importance of Turkish political movements in Bulgaria? What do you think about the position of the Rights and Freedoms Party in Bulgarian politics?

Marian Karagyozov: Let me re-phrase your question a bit. If you ask the politicians from the Movement for Rights and Freedoms (MRF), they will tell you that this is a Bulgarian political party. So, I do not think it is correct to talk about Turkish political movements in Bulgaria. Every citizen in the country has equal legal rights and obligations. It might sound strange, but there are some people from Turkish origin, voting for the Bulgarian Socialist Party, which inherited the Bulgarian Communist Party. There are others who vote for the ruling party – GERB. Everyone is free to vote for whichever party they like. MRF portrays itself as a liberal centrist party. This political position gives it the unique opportunity to make coalitions with left -or right- of the center parties. That is why, this party has been in power for many years – one way or the other. Critics are accusing the party of abuse of power and corrupt practices. Do you remember Lord Acton’s famous words? “Power corrupts, absolute power corrups absolutely.” This is the disease of politics everywhere. On the other hand, MRF is investing a lot in education and training of their staff. The movement is giving the party members opportunities to work in the party or to have public positions in order to gain experience. I think now other parties are applying the same approach, but MRF was the first to discover it.

Ahmet Ceylan: Thank you for this interview.

Marian Karagyozov: Thank for having me.