Societies have faced globalization with the same opportunity or threat components in different levels and various fields over the last decades. It can be seen that globalization affects many areas such as economic, social, cultural, and political areas. One of the results of this process is global cooperation of political parties which struggles to express themselves not only to their own country but also to foreign countries. Along with this, the concept of the political parties which are the representative organizations using national power mechanism has transformed.

On the other hand, there have already been many unions of political parties at the global political area except for the EU. International party families can be given as examples. One of them is the Liberal International which has operated to strengthen the liberal parties and promoted liberal democracy since 1947.[i] The Socialist International is the worldwide organization of social democratic, socialist and labor parties. Socialists aim to improve the social democratic policies via their regional and thematic committees.[ii] Moreover, it should be mentioned that organizations such as International Center Democratic Party (IDC) and the International Democrat Union (IDU) exist.[iii] Furthermore, party leaders and cadres are connected with each other. Some parties or leaders serve as a model to the others. 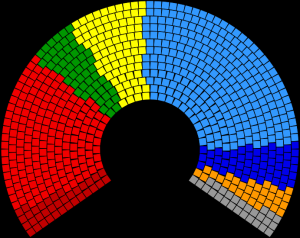 Naturally, these improvements also affect Turkish politics. Turkish political parties are connected to global party families for a long time. Furthermore, Turkish parties prefer to open representative agencies for institutionalizing their random contacts. Thus, the relationship between Turkish party and global party family or any important policy center will be consolidated in the near future. To put it differently, the norm of the Turkish Political Party Laws which allows political parties to be able to open representatives in foreign countries, dated in 1999, has been materialized.

In some respects, the Republican People’s Party (CHP), the main opposition party, which is criticized to fall behind the real politics, has attempted early, in this regard. The long-established party identity may make the connection to international networks easier. The CHP opened representation office in Brussels in 2008 at first. The goals of this office are to represent the CHP in the center of the EU; support the full-membership of Turkey with publications and activities; contribute in various subjects.[iv] By the end of 2013, the representative office of Washington was opened. It is quite significant to note that the CHP is the associate member of the Party of European Socialists (PES) and the full member of the socialist international.

As the large right parties in power cannot provide sustainability, they generally struggled with institutionalization problem. For instance, the Motherland Party (ANAP), became a member of European Democratic Union. The True Path Party (DYP) and the Welfare Party (RP) also made an attempt to become a member of EDU.[v]

The Justice and Development Party (AK Party) gained the observer status of the European People’s Party (EPP) in the early 2000s. The head of the EPP, Wilfried Martens indicates that AK Party attended to the EPP in 2005 because of the advantages of the large group of the EPP.[vi] Nonetheless, the AK Party has become a member of Allience of European Conservatives and Reformists through the end of 2013.[vii] Jan Zahradil, the head of the AECR stated that “I am really glad for the AK Party’s participation. We have many common values just like the beliefs in individual and religious freedom, national sovereignty, a Europe consisting nations, private enterprise and minimal government”.[viii] As known, while the EPP desires a centralized EU governed in Brussels, the AECR opposes to EU federalism. Moreover, these improvements show the AK Party’s changing standpoint on the EU.

The Peace and Democracy Party (BDP) has attended the Socialist International with the status of consultative party. Just like the CHP, the BDP has joined the PES as an associate member. The MHP has stated that it has plans to open representative offices in various places however currently there are no legal representative offices.

Although it is not much influential in internal politics, just like other institutions, parties’ need of global networks is increasing day by day. This presents a comparative perspective from the improvement of common policies to the setting of the standards.