PUTIN’S CHINA VISIT: WHERE DOES THIS “ROAD” LEAD? 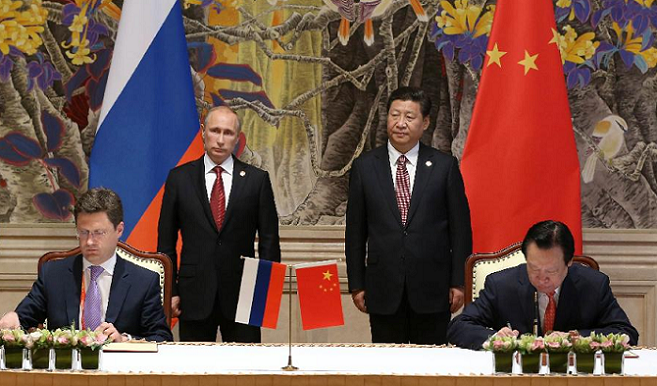 Talks held by Russian President in Shanghai captured international media’s attention. Politicians and experts also focused on this subject. There are opinions that Moscow and Beijing are making significant changes in the global geopolitical environment. Some experts are even predicting establishment of a new world order. Actually, agreements reached between the parties are quite intriguing. Signing of a gas deal caused particular resonance. Still, evaluations differ in this regard. So, what is happening in reality?

Russian President Vladimir Putin’s recent visit to China was dubbed historic. Some also regard it as a new phase of the new world order. According to Zhu Jinjie, an expert on BRICS countries and Russia-China relations, “The meeting between the two heads of state is symbolic and is associated with the new world order” (see: Poutine va discuter en Chine un “nouvel ordre mondial” / “Le Figaro”, 20 May 2014). Russian President had underscored that cooperation between the two nations reached unprecedented heights. While underscoring that no similar gas deal had ever been signed, he pointed to its geopolitical significance (see: Андрей Колесников. Контракт многогазового использования / “Коммерсант”, 22 May 2014).

Reaction of the Western media was also very interesting and in many ways controversial. In fact, entire media chose to scrutinize Russia-China relations. Analysis of different aspects produced diverse results. The following idea published by Germany’s “Die Welt” newspaper alone reflects the generally accepted position in the West, “Meeting between the Russian President Vladimir Putin and the President of PRC Xi Jingping may produce an outcome once to be dubbed as historic in geopolitical and economic terms (see: Von Christoph B. Schlitz. Putin schmiedet sich ein antiwestliches Bundnis / www.welt.de, 20 May 2014).

Admittedly, Western analyst and expert circles already consider Putin-Xi Jinping meeting historic. First, in last 100 years, this is the first time, that amidst grave contradictions, Russia and China are coming closer. Second, they may introduce new game rules to the world order shaped by the Euro-Atlantic nations. This sends out serious signals to the West. Undoubtedly, those with global dominance aspirations can grow wary. However, the real facts reflect the objectivity and are impossible to neglect.

All of this is fascinating in the context of changes of the geopolitical dynamics. Still, the most important issue is the areas where the two heads of state had agreed to cooperate. The point is, according to some experts, there are some aspects that obstruct the strategic cooperation. Mark Adomanis writes, “… Whether Russia scored a massive coup or it god duped be Beijing is not yet clear” (see: Mark Adomanis /The Russia-China Gas Deal Matters But Its Ultimate Significance is Unclear / “Forbes”, 21 May 2014). Position of the Bloomberg Businessweek magazine with respect to the gas deal inked by Russia and China is more thought-provoking. This magazine asks a question “Is the Russia-China Gas Deal for Real – or Just Fumes?” (see: Matthew Philips. Is the Russia-China Gas Deal for Real – or Just Fumes? / www.businessweek.com, 21 May 2014).

Therefore, given China’s big aspirations, experts underscore a possibility that Russia, relatively weaker in economic terms, may end up as a “junior partner” in this relationship. Their argument is the contradictions that persist between the “reality and rhetoric” (see: Nikolas Gvosdev. Get Ready World: China and Russia Are Getting Closer / “The National Interest”, 20 May 2014).

Apparently, under any circumstances, political quarters, experts and media outlets are sure that Russian President’s visit to China will have significant global and regional implications. Different assessments of the secured agreements once again attest to such a conclusion. Therefore, a need arises to address the issue of a gas deal more comprehensively.

According, to official sources the agreement was signed for 30 years and was estimated to be around $400 billion. China is due to receive the natural gas front the fields in Siberia and new pipelines are to be constructed to that end. Beijing will make a down payment of $25 billion and is scheduled to receive the gas as of 2018.

It must be said that Russian officials appeared extremely joyful when they broke the news of the agreement. Still, experts stress many questions that come with it. First of all, they underscore that China obtains opportunity to expand its presence in Siberia. According to James Henderson, a senior researcher at the Oxford Institute for Energy Studies, “China has a pretty strong bargaining chip against Russia. The gas in east Siberia is stranded, and it is not going to go anywhere else but to China” (see: Wayne Ma. Why China is Driving a Hard Bargain with Russia Over Gas” / “The Wall Street Journal”, 19 May 2014).

Bloomberg Businessweek asks a more intriguing question. Derek Scissors, an expert on Asian economy believes that agreement was reached only with regard to the volumes, while price information that the parties release is quite conflicting. How can the price be regulated when things may change in a matter of a month? Meanwhile, officials are saying that price per 1000 cubic meters during the 30 years is going to change. So, what are the calculations behind the $400 billion figure?

Deriving from that, experts conclude that signed agreement is actually formal. The subject of price is yet to be negotiated. And the fact of Russian and Chinese leaders creating an appearance of agreement is attributed to the geopolitical situation. Beijing wants to solidify Putin’s position ahead of the “G20” meeting where the former is scheduled to meet Obama and Merkel.

There is another detail to be underscored. It is not accidental that the experts are elaborating extensively on the issue of gas because energy cooperation is directly linked with global geopolitics. The West is pressuring Russia over Ukraine. Sanctions imposed on Moscow are being hardened. Experts believe that should the processes continue, Kremlin will end up in a predicament. And this is the very development that Putin aims to thwart. Elevating the ties with China is a direct message to the West. Namely, Moscow demonstrates broad maneuvering space. Yet there are two sensitive geopolitical factors here.

First, the U.S. is closely monitoring the process. On one hand, Washington is increasing its military capabilities in the Asia-Pacific. Beijing is troubled by that. On the other hand, China is inflaming territorial disputes with its neighbors. Most recent anti-China riots in Vietnam, as well as Pyongyang expressing its renewed territorial claims were not accidental (see: Allen R. Carlson. China’s Achilles’ Heel on the South China Sea / “The National Interest”, 16 May 2014). Some experts describe China’s policy with respect to Sino-Vietnamese relations as China’s Achilles’ Heel. Issues with Japan, Korea, Philippines, Singapore and Taiwan can also be added here.

Can this course of developments one day incapacitate energy line to unite Russia and China? Answer to this question is unknown because geopolitical actions of the West are always consistent with present day demands. Evidently, Washington is moving step-by-step towards China’s “geopolitical encirclement”.

Second, interests of Russia and China in the Central Asia collide. Experts spoke extensively of this subject. China has managed to sign strategic partnership agreements with all the countries of the Central Asia (see: Joshua Kucera. With Turkmenistan, China Now Has “Strategic Partnerships” With All Five Central Asian States / “EurasiaNet”, 13 May 2014).

This is something that causes absolute displeasure of Moscow; along with other reasons, also because Chinese currency is stronger than ruble. Kremlin is alarmed by the inability to withstand competition. And relations between the two nations within “Shanghai Club” are a testimony to such an inference.

That being said, Russian President’s visit to China is indeed historic. On one hand, several centuries-long rules of the geopolitical game may change. On the other hand, contradictions between Russia and China – Asia’s two giants – may be supplemented with new substance. It is difficult to say who has the winning hand. May be the West will benefit the most from these developments. Or what if Putin’s visit to China produces positive historic sense for U.S. and Europe?