THE SCOPE AND VISION OF IRAN’S PETROLEUM AND GAS SECTOR: A TALK WITH DR. AMIR HOSSEIN ZAMANINIA, IRAN DEPUTY MINISTER OF PETROLEUM FOR TRADE AND INTERNATIONAL AFFAIRS

22nd World Petroleum Congress (WPC) in 2017, extensively renowned as the “Olympics” of the oil and gas industry held at the Istanbul Convention Center in Istanbul, Turkey on July 12, 2017. Iranian Deputy Minister of Petroleum Dr. Amir Hossein Zamaninia also attended the 22nd WPC. I had a chance to meet and talk with him personally for a while at the National Iranian Oil Company (NIOC) stand. In the meantime, NIOC represented Iran at 22WPC2017 at İstanbul had a stand covered 280 square meters of ground in the congress. 23 articles for poster display by the NIOC have been approved in the congress. Within the bracket increasing NIOC’s share of revenue from joint oil and gas fields’ output one of the strategies of MoP by the way which can be observed on The Ministry of Petroleum (MoP) official site.

The 22nd World Petroleum Congress provided a platform for open dialogue to build bridges between consumers and producers, governments and industry, academia and financiers, leaders and society, in order to address these issues and present debates, developments and solutions for sustainable production and use of the world’s energy resources. The Congress is arranged around Plenary Sessions, forums with papers and posters, round tables, ministerial sessions, CEO panels, strategic sessions and reports from the WPC Expert workshops. Concerning taking leadership in responsible operation in the energy sector, during the sessions mentioned above Zamaninia said, “It is recognized that business cannot be as usual in energy production, distribution and use.” 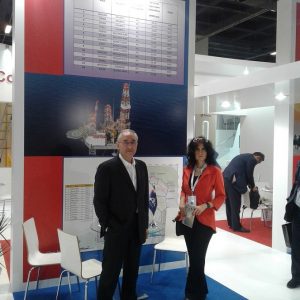 Tehran salutes greater engagement of Turkish firms. “Iran is seeking further engagement with Turkish companies especially in the upstream and downstream projects” said Iranian Deputy Minister of Petroleum Dr. Amir Hossein Zamaninia on 12th July 2017. He also added, “Turkey is one of our customers. We have a long-term contract to supply oil to Turkey, which is going pretty well.”

Dr. Amir Hossein Zamaninia said there were many common grounds for investment between Iran and Turkey. “We need to work together to find projects that suit both companies in Turkey and Iran, which have plenty”, he continued. Zamaninia, at the 22WPC2017 in Istanbul, said he was already in contact with several Turkish companies, but did not unveil any further details. “Turkish companies are into power generation, importation of gas and oil, and we want to encourage them to engage in upstream projects as well”, he said. Many areas in Iran still untapped concerning the Iran’s hydrocarbon reserves, he said the Iran’s production had not reached its maximum capacity yet. “Production is much less relatively speaking to the reserves that we have. Therefore, the cost of production in Iran is very low”, he added. Meanwhile, Iran has been producing around 3.8 million barrels per day in recent months. According to Zamaninia, this will further increased. “By the end of 2017 we hope to reach about 4 million barrels per a day”, he said.

Zamaninia also debated the ambitious objectives of SDG 7 for 2030, saying the goals include universal access to energy, doubling the share of renewable energy in the global energy mix and doubling the global rate of improvement in energy efficiency. He said more than 3 billion people suffer from energy poverty in the world and have no access to clean cooking. Zamaninia projected that by 2040; gas supersedes oil and constitutes 26.6 per cent the global energy basket in the session on 11th July, 2017.

Following the Joint Comprehensive Plan of Action (JCPOA) for Iran’s nuclear program, the situation normalized to the extent that the country is engaging with both international and national oil companies. “We have about 27 negotiations ongoing for different upstream projects”, he told.

Zamaninia said that a contract with French energy giant Total was finalized within 18 months, explaining that this was “normal” for a major oil and gas contract. Iran signed a new contract in the beginning of July to develop “Phase 11” of the world’s largest gas field development project, the South Pars gas field, with the French oil company Total and China National Petroleum Corporation and Iranian company Petro pars. “When it is finished in three years, it will add about 56 million cubic meters of gas to our production”, he said. He also pointed out the fact that; it is a 20-year contract and has two phases. The initial direct investment is somewhere close to 4.8 billion US$. In the meantime, he also addressed the significance of technology transfer importance in this regard. Zamaninia said all negotiations that Iran has been engaging in contain an important technology transfer component including “technology transfer, management and investment” on PL07: “Taking Leadership for Responsible Operations” Wednesday 12th  July 09:30 –10:30 (Plenary Hall) Session chaired by Elisabeth Torstad, and CEO Oil and Gas, DNV GL, Norway, with the participation of  Keynote Speakers: Bob Dudley, CEO, BP, UK Barry Worthington, Executive Director, United States Energy Association (USEA), USA Dr. Amir Hossein Zamaninia, Deputy Minister of Petroleum for Trade and International Affairs, Iran.

Furthermore, Zamaninia promised 10 contracts like it in the next year and said they were seeking US$92 billion in foreign investment to raise oil production by a third and gas exports by 15-fold by 2021. “Our hands are full”, Iran’s Deputy Oil Minister Amir Hossein Zamaninia said. Zamaninia said Iran has “parallel negotiations with other companies that will come to an end in a few weeks” and “You will hear about other contracts that have been made”, he said. But he did not elaborate on the companies that could potentially participate. He also never mentioned a name but gave further hints by his following word; “I will not give names but I will tell you that as I said there are totally  26 negotiations [excluding Total] that are ongoing in parallel, all of the upstream projects and little by little they will come to conclusion as early as the end of August”.

Cautiousness of Western companies toward Iran due to U.S.sanctions on Iran

According to him, the situation is normal enough now for major international oil business to get engaged in Iran. But other big oil companies have been more cautious than Total about paddling into Iran, even with its enormous oil and gas reserves. The fact that was addressed was, Western companies are cautious of running afoul and conflict of remaining U.S. sanctions on Iran for weapons, human rights and terrorism allegations. Overall, the industry is still smarting from an oil-price downturn that isn’t letting up in its third year, making companies wary of new spending.

Then BP (platinum sponsor of WPC) PLC Chief Executive (CEO) Bob Dudley told he was looking beyond Iran for now, as the company had already committed to 15 billion US$ in spending elsewhere this year referring 2017. Speaking at the same conference in 22WPC2017, U.S. companies like Exxon Mobil Corp. and Chevron Corp. are barred from doing business in Iran, but European companies like London-based BP can still try to make a deal work. One factor slowing things down: U.S. President Donald Trump has critiqued the deal over Iran’s nuclear program and threatened to pull out or tighten sanctions. “BP’s decision to be cautious on Iran was a ripple effect” of U.S. pressure against doing business in Iran, Zamaninia said.

A BP spokesman made a remark in that point. Total’s commitment in Iran is evidence that oil companies have concluded “the return of sanctions is very unlikely, if not impossible,” Mr. Zamaninia said. Total said it was in compliance with all sanctions. A Shell spokeswoman said: “Shell is interested in exploring the role it can play in developing Iran’s energy potential. We have been engaging with Iranian officials but it is still too early to discuss potential Shell investment in any project.”

Within the bracket, oil companies were carefully watching a political debate playing out in Iran since the Total deal. On 12th July, Iranian Oil Minister Bijan Namdar Zangeneh was grilled in Iran’s parliament over what some hard-liners said was a sweet deal for Total. Some lawmakers threatened to block it, though they relented. In an open session of the parliament Zanganeh, briefed the lawmakers on a controversial US$5 billion gas deal recently signed with France’s energy giant Total, saying the agreement would serve the Islamic Republic’s interests.

Back to the panel, Iran is also working against a persistent chill in oil investments globally. While global oil and gas investments are set to increase by 3 % this year, most of it is flowing to the U.S. shale oil, according to the International Energy Agency, an adviser to governments on energy issues.

Iran’s old oil fields are a challenge, requiring “patience and high technology,” Laszlo Varro, the IEA’s chief economist, said. Additionally, Iran’s geopolitical risks, complex contracts and risk of sanctions could discourage investors who can go to other growing oil regions like Brazil instead, Mr. Varro told. “Iran will remain under its geological potential for quite some time”, he added.