No surprise took place in Turkish elections. Turkey’s undisputed leader Mr. Recep Tayyip Erdoğan won another election with 52.59 % of the votes (more than 26 million votes) in the Presidential race. Pro-secular Republican People’s Party’s (CHP) candidate Mr. Muharrem İnce took 30.64 % of the votes (more than 15 million votes) and made a meaningful rise in his party’s support; but it was not enough to prevent Mr. Erdoğan to win the Presidency in the first round. Imprisoned Kurdish leader Selahattin Demirtaş had a disappointing result with only 8.40 % of votes (more than 4 million votes) and took the third place, whereas Turkish nationalist female leader Meral Akşener with -less than expected- 7.29 % of the votes (almost 4 million votes) became the fourth Presidential candidate. Two other candidates; pro-Islamist Temel Karamollaoğlu had 0.89 % of the votes, whereas socialist-nationalist Doğu Perinçek acquired only 0.20 %. Results proved once again that Islamist resurgence in Turkey continues under Erdoğan’s charismatic leadership and Erdoğan’s strategy of making alliance with Turkish nationalists (Nationalist Action Party-MHP and Great Unity Party-BBP) worked quite well for this election. The participation was about 86.24 % for the Presidential election and 86.22 % for the parliamentary election; very high percentages which show that Turkish people really like elections and do not hesitate to use their democratic rights. 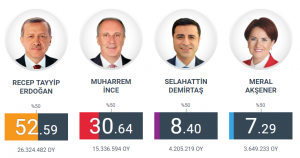 Parliamentary election on the other hand also gives a similar picture for Turkish politics. Erdoğan’s AK Parti’s (Justice and Development Party-JDP) electoral coalition with MHP provided Mr. Erdoğan a simple majority in the -now 600 seated- Turkish parliament (295 for AK Parti and 49 for MHP), but the party’s votes fell down to 42.56 %. AK Parti was able to became the leading party in 63 of 81 Turkish cities (in 8 cities CHP became the leading party whereas HDP won in 10 cities), which shows that this party is the only political organization that appeals to Turkey as a whole. Turkish nationalist MHP did better than expected in the parliamentary election under Mr. Devlet Bahçeli’s leadership and took 11.10 % of the votes by securing the fourth place. Pro-secular CHP (RPP) had got 22.64 % of the votes and took the second place as usual with 146 parliamentary seats. It seems like some of the CHP voters supported pro-Kurdish HDP (People’s Democratic Party) to prevent this party to be out of the parliament due to 10 % electoral threshold. HDP became the third party with 11.70 % of the votes and won 67 seats in the parliament. İYİ Parti (Good Party) took the fifth place with 9.95 % of the votes in its first election and had got 43 seats. Lastly, Felicity Party (Saadet Partisi) took only 1.36 % of the total votes and could not win a parliamentary seat. These two countries (Good Party and Felicity Party) did not have electoral threshold problem due to their electoral alliance with CHP. These results show that AK Parti-MHP alliance will help President Erdoğan to control the Turkish Parliament as well and President Erdoğan will continue to be the strongest actor in Turkish politics.

If we make an analysis of this election, we can clearly say that Turkish people’s support for Mr. Erdoğan’s Islamist and authoritarian leaning regime continues due to historical and cultural reasons as well as current political issues (Syrian civil war, terrorism risks and the Kurdish Question). Turkish people preferred a well-known problematic against a complete unknown in this election by supporting Erdoğan and his party. Although the main opposition candidate Muharrem İnce increased his party’s votes approximately by 7 % compared to previous parliamentary election, it looks like the opposition needs to make more efforts to take Islamist-conservative segments’ support. This proves that the candidacy of previous President Mr. Abdullah Gül could have been a better choice against a skillful Islamist populist like Erdoğan. I should here also add that Muharrem İnce took much less votes compared to CHP’s previous Presidential candidate Mr. Ekmeleddin İhsanoğlu who took 38.44 % in the 2014 Presidential election against Erdoğan. So, results show once again that the opposition in Turkey needs to make peace with conservatives and Kurds in order to be more successful at ballots. However, with an obvious increase in his party’s votes in the Presidential election, Mr. İnce could be once again a leadership candidate against Mr. Kemal Kılıçdaroğlu in the following months (he lost party leadership race twice against Kılıçdaroğlu previously). Mr. Kılıçdaroğlu might try to take advantage from Mr. İnce’s popularity as well by choosing him as the municipal leader candidate for İstanbul or Ankara for the 2019 March local elections. Turkish nationalism also now finds a stronger base in parliamentary politics with two Turkish nationalist parties MHP and İYİ Parti (Good Party) in Turkish Grand National Assembly having almost 21 % of the total votes. In addition, Kurdish nationalist HDP protected its electoral base, but its imprisoned leader Selahattin Demirtaş lost the popularity that once forced international observers to describe him as “Kurdish Obama” and “Alexis Tsipras of Turkey”. This was caused by the lack of propaganda chance given to Demirtaş as well as PKK’s terrorist acts that increase reactions against HDP and Demirtaş.

Other than these, Mr. Erdoğan once again proved that his controversial leadership is appealing to the majority of Turkish people and economic problems and diplomatic quarrels would not prevent him to rule Turkey with the new Presidential system he brought that was approved by Turkish people in the last year’s referendum. However, I should also admit that President Erdoğan’s victory would not solve Turkey’s problems immediately; since the country’s economic problems have deepened during the election process and concerning foreign policy also Turkey has serious problems and disagreements with its Western allies. Finally, I think Mr. Erdoğan’s alliance with Turkish nationalists (MHP) will continue after the election and Turkey’s military involvement into Syria and Iraq will further deepen simultaneously with the domestic reforms in order to install the new presidential system completely. Another unspoken problem on the other hand is the rising tensions in the Eastern Mediterranean and Cyprus which will make things difficult for President Erdoğan in the coming years. To end this piece, I must say that Turkey’s leftists and democrats need to prepare themselves very well for the next election by putting aside their prejudices against Kurds and Islamists.

Graphics and statistics are taken from NTV.