A small environmentalist protest that started on 28 May 2013 in order to protect one of the rare green areas in Taksim called “Gezi Park” surprisingly turned into a massive social movement in Turkey this week. Although the Turkish media -probably because of government’s pressures- did not seem willingly to publish news about the anti-government demonstrations in the early days, after a huge interest shown by the international media, demonstrations became very popular in the country and spread to all “metropolis” cities in Turkey including İstanbul, Ankara and İzmir. Nowadays, there are discussions in Turkish and international media about whether these peaceful and democratic demonstrations could turn into a “Turkish Spring” similar to Arab Spring movements. In this article, I would like to take a closer look to “Occupy Gezi” movement and analyze the reasons that gave birth to this event. 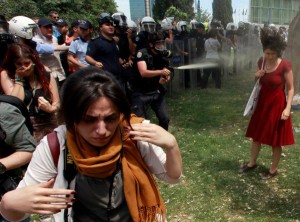 It all started with this frame showing police brutality towards environmentalists

When we take a closer look to events taking place in Turkey, it is not surprising to see that the driving force behind this social movement is the fear of secular-minded Turkish people towards the increasing Islamist, authoritarian and one-man based political practices of the ruling JDP (Justice and Development Party) government. Just two weeks ago, the government by using its majority in Turkish Grand National Assembly, passed a controversial law limiting the sale and the use of alcohol in the country. This was followed by Turkish Prime Minister Recep Tayyip Erdoğan’s statements defending this law with making reference to Islamic holy book Qur’an, a clear violation of secularism principle of the Turkish constitution. Maybe for the first time in Turkish political history, a politician defended his political positioning solely by religious reference, an unusual practice for secular Turks. In addition, Erdoğan blamed founders of secular Turkish Republic Mustafa Kemal Atatürk and İsmet İnönü as “two drunkards”, which created enormous anger among Westernized segments of the country towards the pro-Islamic Prime Minister. These events were perceived as government’s interference into private sphere and direct intervention to people’s lives. 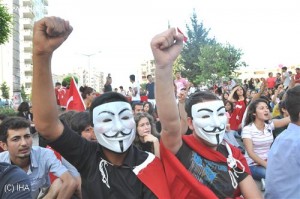 Second important reason behind massive social movement was the excessive use of force by Turkish policemen, a historical national habit for Turkish armed bureaucracy. Although in the early days, participation into demonstrations were very limited and ecology-based in its essence, harsh methods used by Turkish police towards peaceful demonstrations created anger among Turkish people especially among Turkish youth and transformed “Occupy Gezi” into a social revolutionary movement. 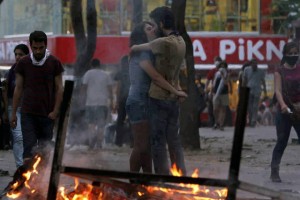 From Taksim with love

Thirdly, it is no coincidence to see that environmentalism and ecological issues are still seen very marginal and unimportant issues by the JDP government and generally by all Turkish political parties and politicians. However, Westernized and better-educated segments of the country have started to show increasing interest into environmentalist issues in the last years. Thus, Gezi Park is perceived as a last castle in Taksim Square and the government’s intention to destroy the park triggered environmentalist sensitivities. 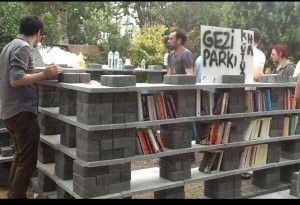 Fourthly, events were organized by young Turkish citizens using social media applications such as Facebook and Twitter, a modern youth having knowledge and conscience about Western standards of democracy and Turkey’s lack of having it. Technological revolution of the last decade became a convenient tool for suppressed groups to defend their views for radical democracy, as it was seen in the case of Jasmine and Egyptian revolutions of 2011 and 2012. The use of social media turned demonstrations into a protest youth organization reminding the 1968 generation and Woodstock festivals of the past. However, after Prime Minister Erdoğan’s statement describing Twitter as a “headache for countries”, yesterday Turkish police started to arrest students who use social media to organize these events. 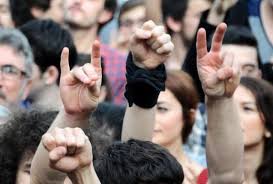 People from different ideologies unified against a common threat

Fifthly, Prime Minister Erdoğan’s arrogant response to protesters by saying “We took a decision and no matter what you do, we will remove this park from there” as well as “These are marginalized bandit groups” made the demonstrations even stronger. As Erdoğan spoke, the number of people who joined the demonstrations increased. Erdoğan, starting from the early days of his career, has always preferred a daily life language in his speeches in order to seem like a “leader coming out of people from the streets”, but his rude style of speech continues to irritate better educated people in the country. This time, the hatred towards Erdoğan’s Islamic populist style seems to reach the highest point among secular segments of the country. 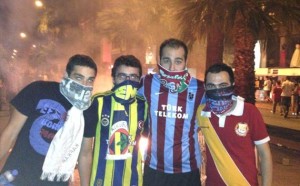 Gezi movement is even stronger than soccer fanaticism

These reasons led to a popular social movement and crowded demonstrations that gathered people from different identities (environmentalists, anti-capitalist leftist and Islamic groups, liberals, gay and lesbians, Kemalists, Kurds, nationalists, anarchists) together. Although this heterogeneous group does not possess a strict common ideology, one thing makes them unified; being against Erdoğan’s authoritarian and Islamist one-man rule. However, Prime Minister Erdoğan, instead of decreasing the tension, chose to insult young people and this social movement and proved once again that he is not a man of negotiations but of dictating. The demands of the protesters could be stated as the protection of Gezi Park, government’s respect and guarantee for different lifestyles, stopping of police brutality and resignation of Prime Minister Erdoğan. In fact, first three demands could be easily realized but Erdoğan probably won’t make such a thing because of his jihadist worldview that considers democratic negotiations and agreements as defeats. 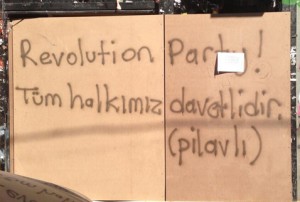 As a close observer of Erdoğan, I can say that although these demonstrations were promising for the future, the weakness of Turkey’s pro-secular political parties -namely social democratic Republican People’s Party and Turkish nationalist Nationalist Action Party- will probably make Erdoğan even more angry and authoritarian in the following days. Erdoğan clearly believes in Rousseau type of majoritarian democracy and he does not see any problem about Islamic and authoritarian transformation of the country as long as he wins in the elections. After the elimination of pro-secular Turkish Armed Forces in the recent years, Erdoğan will continue to use his majority in the Parliament to make the regime more Islamic and will leave little space for pluralism. No matter how hard he tries to cover it, Erdoğan is a radical Islamist who wants to establish an Islamic political system and he won’t stop until he is out of the scene. Erdoğan takes his power from uneducated masses and he is like a rock star for pious Turkish and Kurdish people. He has managed to survive until now, although his foreign policy with the aspirations of creating a new Ottoman Empire became troubled vis-a-vis Syrian crisis. Thus, dethroning “Sultan Erdoğan” does not seem easy for the opposition groups at least for the moment. In addition, Erdoğan is the mastermind of polarized politics and until now he has won 3 general (2002, 2007, 2011) and 2 local elections (2004, 2009), as well as 2 referendums by polarizing the society within the lines of secularist-Islamist dichotomy. That is why, these events may not weaken but consolidate Erdoğan’s regime.

The only barrier for Erdoğan could be the negative economic performance of the country in the near future, which could raise questions about the success of his regime. Establishment of a new liberal political party that could unify all these opposing groups and new social actors in the country could also be a chance for the deepening and more pessimistically for the survival of Turkish democracy. Finally, in my opinion what has been happening in Turkey is different from Arab Spring movements since Turkey has a flawed -but still- democracy. However, at the same time I also think that there is no mistake in calling this process as “Turkish Spring” since this is a new sociopolitical process driven by the politicization of Western lifestyles of modern Turkish youth with the use of new technological tools, which could help Turkey to deepen its democracy and get rid of Islamic authoritarianism in the future.