There is no denying that “energy politics” has become a significant part of the regional and global economy as well as geopolitics and international relations in the last decades. While energy policy is about the manner in which a given entity (often governmental) has decided to address issues of  energy development including energy production, distribution and consumption[1], energy politics refers to macro-political issues between states, international organizations and large energy companies about the security, transportation and the sale and pricing of energy resources. Finding clean, cheap, uninterrupted and diversified energy resources for ensuring the sustainable development has been one of the main principles of the countries in general in the last decades. The core of the industry is for sure the discovery of new energy resources. The energy and its efficient use is one of the indispensable factors that influence the economic and social development in today’s world. Within that framework, the reaching energy and continuously ironing out this need is a matter of security rather than a necessity.[2] Resources namely oil and natural gas come into forefront as the most demanded natural resources in the world. As Kısacık points out; in a rapidly globalized world, this has brought about the linking of supplier countries with the demand centers via several transportation ways above all the pipelines.[3]

Oil and gas exploration activities in deep waters have become much more evident in the second half of the 2000s, and the Greek Cypriots also decided to join this adventure. In this first period, although they have been flirting with many US-based energy companies, they did not achieve starting exploration activities as a result of Turkish pressure.[4] Greek Cyprus later has signed an agreement to delineate the Exclusive Economic Zone (EEZ) with Egypt and Israel with a view to exploiting any possible natural gas and oil reserves in its zone. A similar agreement has been signed with Lebanon but the Lebanese Parliament has not yet ratified the deal.[5] As the Greek side completed the necessary legal basis for drilling activities, the beginning of those activities has become possible with the inclusion of the Noble Energy Company[6] in this equation. Noble Energy as a growing energy company has become an important actor regarding recent activities in the Mediterranean market. The company wants to enhance its operations from Israel to Cyprus.

The Exclusive Economic Zone of Cyprus covers more than 70000 km2 and is divided between 13 exploration blocks. The process of the establishment of Cyprus, Israel and Lebanon Exclusive Economic Zones was held in Nicosia in 2010 with separate meetings between each country. Cyprus and Israel as part of their wider cooperation have agreed to start their gas explorations with a common American company, specifically Noble Energy. Cypriot and Israeli governments are discussing to export their natural gas through the shipping of compressed natural gas to Greece and then to the rest of Europe or through a subsea pipelines starting from Israel and then leading to Greece via Cyprus. According to some experts, the shipping of compressed natural gas will be too expensive in addition to the problems of safety that will be caused without Turkey’s support to the project.[7] Moreover, the United Kingdom also has a claim on part of the area resulting from its sovereignty over its two base areas (Akrotiri and Dhekelia) in Cyprus. The treaty establishing the Republic of Cyprus specifically excluded any Cypriot claim to the two maritime areas adjacent to the bases.[8] 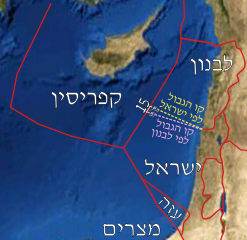 Exclusive economic zone between Israel and Cyprus as signed in Nicosia 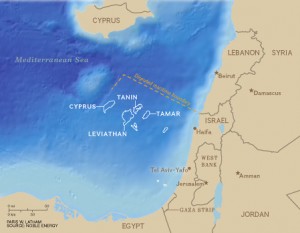 However, there are some problems related to the safe transportation of these resources mostly because of political problems came to be known as Cyprus Dispute. To summarize from Wikipedia[13], the Cyprus Dispute refers to the result of the ongoing conflict between the Republic of Cyprus and Turkey, over the Turkish controlled northern part of Cyprus. Initially, with the annexation of the island by the British Empire, the “Cyprus Dispute” was identified as the conflict between the people of Cyprus and the British Crown regarding the Cypriots’ demand for self-determination. The dispute however was finally shifted from a colonial dispute to an ethnic dispute between the Turkish and the Greek islanders. The international complications of the dispute stretch far beyond the boundaries of the island of Cyprus itself and involve the guarantor powers (Turkey, Greece, and the United Kingdom alike), along with the United States, the United Nations and the European Union. With Turkey’s intervention into the island (Cyprus Peace Operation)  in 1974 because of a fascist military coup in the island aiming the annexation of Cyprus with Greece and attacks towards Turkish Cypriots starting from 1963, Turkey occupied the northern part of the internationally recognized Republic of Cyprus, and later upon those territories the Turkish Cypriot community unilaterally declared independence forming the Turkish Republic of Northern Cyprus (TRNC) in 1983, a sovereign de facto state that lacks international recognition with the exception of Turkey, with which TRNC enjoys full diplomatic relations.[14] After the two communities and the guarantor countries have committed themselves in finding a peaceful solution over the dispute, the United Nations have since created and maintained a buffer zone (the “Green Line”) to avoid any further inter-communal tensions and hostilities. This zone separates the Greek Cypriot-controlled south from the Turkish Cypriot-controlled north.

In 2004, with a settlement plan for the unification of the island called the Annan Plan (It as prepared by UN Secretary General of the period Kofi Annan and thus was named after him), a new peace plan to revive the divided Cyprus Republic was put into referendum on both sides of the island. The United Kingdom (as a guarantor power) and the United States came out in favor of the plan. Turkey also clearly signaled its support for the plan. The Greek government decided to remain neutral. On 24 April, Turkish Cypriots endorsed the plan by a margin of almost two to one. However, the Greek Cypriots voted against the plan, by a margin of about three to one in a way to prove the difficulty of the problem because of ultra-nationalism.

On 1 May 2004, a week after the referendum, Cyprus Republic joined the European Union. Under the terms of accession the whole island is considered to be a member of the European Union. However, the terms of the acquis communautaire, the EU’s body of laws, have been suspended in the Northern Cyprus. After the referendum, in June 2004, Turkish Republic of Northern Cyprus became an “observer member” country in the Organization of Islamic Conference (OIC) under the name of Turkish Cypriot State. Despite initial hopes that a new process to modify the rejected plan would start by Autumn, most of the rest of 2004 was taken up with discussions over a proposal by the European Union to open up direct trade with the Turkish Cypriots and provide €259,000,000 in funds to help them upgrade their infrastructure. Promises given by the European Union were not met and this decreased the credibility of the Union.[15] In addition, Greek Cypriots with the name of Cyprus Republic began to represent the whole island in the EU and started to use this issue in order to block Turkey’s accession to EU.[16] In October 2012, TRNC became an “observer member” country of Economic Cooperation Organization again under the name of Turkish Cypriot State.

After the Presidential election in the south Cyprus in February 2013, a liberal politician who supported the Annan Plan in the past, Nikos Anastasiades (Anastasiadis) became the President of Cyprus Republic.[17] Hopes for the unification of the island further increased since last week pro-settlement social democratic Republican Turkish Party (CTP) has won the elections in TRNC.[18] Turkish Foreign Minister Ahmet Davutoğlu also recently made a statement and by making reference to the “either death or partition” slogan of Turkish nationalists in the past, he said “either solution or partition” showing Turkey’s positive approach for the solution of the problem although Turkish Cypriots faced with the unethical and unequal treatment of European Union in regards to the Cyprus Dispute only few years ago.[19]

Cyprus Dispute will be at the top of the agenda for the upcoming days while a peaceful settlement is not impossible to be realized due to the mutual political and monetary gain for both sides concerning the issue in regards to developing energy politics in the region.

–          Kısacık, Sina (2012), “An Analysis on the Rivalry between the Global and Regional Powers on the Transportation of Caucasia and Central Asian Hydrocarbon Resources”, Uluslararası Politika Akademisi, Retrieved on 31.07.2013 from http://politikaakademisi.org/an-analysis-on-the-rivalry-between-the-global-and-regional-powers-on-the-transportation-of-caucasia-and-central-asian-hydrocarbon-resources/.

[2] Sina Kısacık (2012), “An Analysis on the Rivalry between the Global and Regional Powers on the Transportation of Caucasia and Central Asian Hydrocarbon Resources”, Uluslararası Politika Akademisi, Retrieved on 31.07.2013 from http://politikaakademisi.org/an-analysis-on-the-rivalry-between-the-global-and-regional-powers-on-the-transportation-of-caucasia-and-central-asian-hydrocarbon-resources/.

[3] For details see; Sina Kısacık (2012), “An Analysis on the Rivalry between the Global and Regional Powers on the Transportation of Caucasia and Central Asian Hydrocarbon Resources”, Uluslararası Politika Akademisi, Retrieved on 31.07.2013 from http://politikaakademisi.org/an-analysis-on-the-rivalry-between-the-global-and-regional-powers-on-the-transportation-of-caucasia-and-central-asian-hydrocarbon-resources/.

[6] Noble Energy, Inc. of Houston, Texas, United States is the modern name of Noble Affiliates Inc., by which it was known through the 1990s, and it is now an oil and natural gas exploration and production company with almost US$3 billion in revenue at #660 on the 2007 Fortune 1000 list of the largest American companies. In 1985, Noble Affiliates spun off its subsidiary Noble Drilling Corporation to shareholders, and that company in turn went public by the early 1990s, and then became Noble Corporation, an S&P 500 company. In South America, the company operates in Argentina and Ecuador. In Africa, Noble Energy operates in Equatorial Guinea. And in Eurasia, it operates in the Mediterranean Sea, the North Sea and China. Noble is headquartered in the Greenspoint district and in Houston. For details see; “Noble Energy”, Wikipedia, Retrieved on 31.07.2013 from http://en.wikipedia.org/wiki/Noble_Energy. For company’s website see; http://www.nobleenergyinc.com.

[9] The Tamar gas field is a natural gas field in the Mediterranean Sea off the coast of Israel. The field is located in Israel’s exclusive economic zone, roughly 80 kilometres (50 mi) west of Haifa in waters 1,700 metres (5,600 ft) deep. While there have been small oil and gas discoveries in Israel over the decades, Tamar was the first large-scale hydrocarbon resource discovered in the country. It was also the first gas discovery made in geological layers dating back to the Oglio-Miocene era in the up-until-then little-explored Levant basin of the Eastern Mediterranean. Since Tamar’s discovery, large gas discoveries have been made in other analogous geological formations of the same age in the region. Since Tamar was the first such discovery, these gas containing formations have become collectively known as Tamar sands. For details see; “Tamar Gas Field”, Wikipedia, Retrieved on 31.07.2013 from http://en.wikipedia.org/wiki/Tamar_gas_field.

[19] “Davutoğlu: Ya Çözüm, Ya Taksim”, Uluslararası Politika Akademisi, Retrieved on 31.07.2013 from http://politikaakademisi.org/davutoglu-ya-cozum-ya-taksim/.

ARE GREECE AND TURKEY HEADING FOR A WAR?