Örmeci: Professor Pipes, it is a privilege to make an interview with you. Thank you for your humility and warm approach to UPA. I would like to begin with Egypt. How do you analyze the coup and the forthcoming days in Egypt? Why do you think Muslim Brotherhood and the elected President Morsi lost the support of international community?

Pipes: Thank you for the opportunity to address your readership.

Between its political divide and economic decline, Egypt is headed for very dark days. The key person is the strongman, Gen. Sisi. Will he move toward civil society and free markets or, more likely, maintain the police state and antique socialism or his predecessors? Morsi did not so much lose international support as Egyptian support; and this happened because he rapidly showed the true face of Islamism. 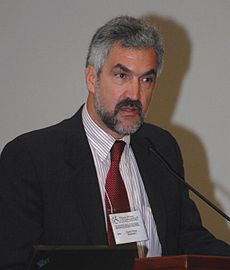 Örmeci: Professor Pipes, after the horrifying last scenes of a chemical attack towards civilians, there are signals coming from the West for a military operation towards Syria, where there has already been a civil war starting from 2011 between pro-regime supporters and Islamist opposition. What do you think for the future of Syria? Which side seems more radical and dangerous to you; pro-Iran Assad forces or radical Islamist al-Nusra front?

Pipes: I foresee a Western military attack on the Syrian government but one not serious enough to affect the outcome of the civil war. Syria will be divided into three parts – government, rebel, and Kurd – for some time to come unless a major and unexpected development takes place, such as the fall of the Islamic Republic of Iran or Russia switching sides. Horrible as the Assad forces are, I see the rebels as even more dangerous.

Örmeci: Professor Pipes, you’ve been an ardent critic of Islamist Justice and Development Party (JDP) in Turkey. You even wrote on June 12, 2011 that (http://www.danielpipes.org/blog/2011/06/turkey-last-free-election) 2011 elections could be the last free elections in Turkey. What do you think about Prime Minister Recep Tayyip Erdoğan and his party’s vision for Turkey? Do you think there is a difference between Middle-Eastern Islamists and Turkish Islamists?

Pipes: I have worried about Erdoğan and the AKP since 2002 and now see all my worries confirmed. Thanks to Gezi Park, I am less worried now about the AKP stealing future elections. Turkish Islamists are the most sophisticated in the world; there is no one elsewhere like Erdoğan, Gül, or Gülen.

Örmeci: Professor, do you think there is a difference between moderate Islamism and radical Islamism? If not, how do you think a Muslim-majority society could embrace Western democracy?

Pipes: There is a difference in tactics – one adapts to modernity more than the other (a symbolized by wearing neckties vs. wearing Arabian robes) but not in goals; all seek the same end. Indeed, because they are more effective, the non-violent Islamists pose a greater threat than the violent ones.

Örmeci: Professor Pipes, you recently wrote about the significance of Gezi Park riots in Turkey (http://www.danielpipes.org/13000/turkey-riots). Do you think there could be an important change in Turkish politics in the near future?

Pipes: I would not be at all surprised if the AKP did as the British Conservative Party did in 1990 with Margaret Thatcher and thanks Erdoğan for a splendid decade, then tells him it’s time to go. Someone like Gül or Bülent Arınç could then replace him and tone down the Islamism.

Pipes: The Islamic Republic of Iran’s leaders are completely devoted to building nuclear weapons and no economic sanctions will impede them. Rouhani’s election is nearly irrelevant to this process. It is relevant, however, in showing the alienation of the Iranian population from the ruling Islamist ideology.

Örmeci: Professor Pipes, what are your true feelings and opinions about Islam?

Pipes: I do not have opinions about religions. I have very strong views on Islamism, which I see as a barbaric ideology that, like fascism and communism, must be defeated and marginalized.

Örmeci: Professor Pipes, I don’t know if there is a specific reason but why your books are not translated into Turkish?

Pipes: But one of them is: see http://www.danielpipes.org/books/path.php for information on Tanrı Adına (Istanbul: Yaprak Yayınevi, 1991).

Örmeci: Lastly Professor, could you give us some Turkish academics or writers that you follow closely and take their views into consideration?

Örmeci: Professor Pipes, thank you for your time.