Turkish people went to polls for municipal elections yesterday. Early results show that the governing Justice and Development Party (JDP) and its authoritarian leader Recep Tayyip Erdoğan had their sixth consecutive victory.[1] Current results show that JDP has got something around 45 %, whereas the pro-secular main opposition Republican People’s Party (RPP) got approximately 29 %, Turkish nationalist Nationalist Action Party got 15 % and pro-Kurdish Peace and Democracy Party (PDP) around 6 %.[2] Elections were overshadowed by fraud claims coming from opposition parties. In many Turkish cities power cuts took place similar to 2009 local elections and this increased suspicions over the elections.[3] Although for the country’s capital Ankara both JDP and RPP claim victory[4], the results clearly show that Erdoğan somehow achieved to secure his place before the Presidential elections that will take place in this summer in the country first time by the direct popular vote. In this piece, I’ll try to analyze 2014 Turkish local elections. 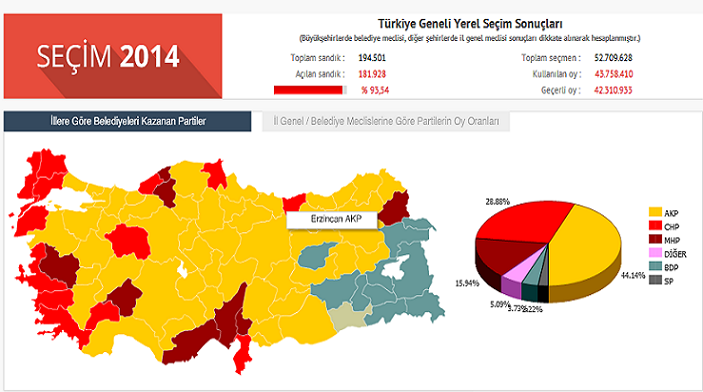 First of all, the turnout rate for the elections were very high according to earlier results though the official results are still undeclared. Prime Minister Erdoğan successfully turned the local elections into a vote of confidence for his pragmatic Islamist vision. It seems like corruption scandals before the elections did not affect conservative voters since JDP lost only 5-6 % of votes compared to 2011 general elections. One thing is for certain; without a center-right party that could challenge Erdoğan’s power, JDP will continue to win because RPP and other parties could not appeal to Turkish conservatives. Speaking from the balcony at his party’s headquarters in Ankara, Erdoğan thanked his supporters and said “You stood up for Turkey’s ideals… For politics, for your party and your Prime Minister”.[6] He also warned that he would “enter the lair” of enemies who had accused him of corruption and leaked state secrets and added “They will pay for this”.[7] Erdoğan now seems confident to become a candidate for Presidency although the opposition still seems to have chance to beat him in such an election in the second round[8] if they could find a good candidate. JDP won 49 municipalities out of 81 in total.

The main opposition RPP’s strategy for this elections seems to produce not good results although the party increased its votes 3 % compared to 2011 general elections. RPP was very assertive in metropolis cities like Ankara and İstanbul with new candidates such as Mustafa Sarıgül and Mansur Yavaş who could appeal to rightist segments in the country also. Both candidates increased party’s votes seriously (especially Yavaş performed very well) but it still seems not enough to win the elections. In Ankara, the dispute continues and Yavaş claims victory against JDP candidate Melih Gökçek. Votes are very close (44 % to 43 %) and probably until the official declaration by the Turkish Supreme Electoral Council (Yüksek Seçim Kurulu) there will not be a winner. Even though RPP wins in Ankara, the results are still far from being a success. Party leader Kemal Kılıçdaroğlu tried everything to increase his party’s votes but without a center-right party that could challenge JDP, he seems desperate. RPP totally won 13 cities out of 81 including the country’s third biggest city İzmir. 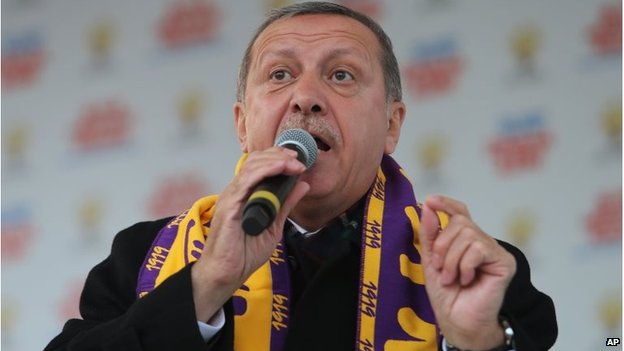 Another victory for Erdoğan

Nationalist Action Party performed well in some cities and got new municipalities although they lost votes in big cities like İstanbul and Ankara. They won 8 municipalities and in some cities lost with small differences against JDP. It shows that NAP could do much more and challenge JDP power especially in Central Anatolia if they could come up with good candidates. The party could also face with a new leadership race  within since reactions against the party chair Devlet Bahçeli are increasing.

Peace and Democracy Party won 11 municipalities all in south-eastern Anatolia, which shows that the Kurdish question in Turkey is now a localized problem centered around Kurdish populated cities in the south-east region. The good thing about the party is that they encourage women participation into politics and two of their new municipal leaders (Gültan Kışanak and Dilek Hatipoğlu) are female politicians.[9]

Although totally they lost votes compared to previous elections, JDP and Erdoğan are clear winners of this election. The results show that pro-secular RPP’s natural borders in Turkish context is around 30 % for the moment and JDP’s power could be challenged only by another rightist party (obviously NAP could not do this). Thus, after the Presidential elections, we can see new efforts to resurrect the liberal center-right tradition in the country against the Islamic authoritarian tradition of Erdoğan and JDP.

[8] RPP and NAP votes totally make 44 % which is nearly equal to JDP votes. But these two parties differ on certain policies since RPP comes from Kemalist tradition and tries to transform into a pro-European social democratic party whereas NAP has always been a Turkish nationalist party.