Matus Jevcak is a PhD student from Masaryk University’s department of Political Science. Jevcak also works at the Strategic Policy Institute in Slovakia as a researcher. He does research in Terrorism, Counter-Insurgency, Foreign Policy, and International Security. He has been visiting Turkey since 2013 and making research about Extreme Leftist Movements and Groups in Turkey.

Dr. Ozan Örmeci: Dear Matus, thank you for accepting our interview proposal. Could you please tell us how your interest in Turkey began and developed in time?

Matus Jevcak: Dear Dr. Örmeci, thank you for inviting me. Regarding your question – it is a long story and it goes back to my first visit of Turkey, back in 2013. As a young student of International Relations, I decided to hitchhike through Turkey for a month, together with my brother. It was an amazing journey; full of history, amazing nature, and most importantly, we met the kindest people in the world during our trip. Since then, I was thinking about focusing on Turkey also in my professional career, just to find the excuse to visit the country as often as possible 😊. Then the story continues with me vising Istanbul and other parts of Turkey multiple times as a student, researcher or just a regular tourist enjoying the hospitality of the local people.

Dr. Ozan Örmeci: Your research focus is about the extreme left in Turkey. Could you please tell us the situation of extreme leftist movements in Turkey after the 12 September 1980 military coup?

Matus Jevcak: It is definitely one of the topics that I do focus on. That is, however, a very broad question. In general, the 1980 coup destroyed much of what we could consider as the extreme left at the time and this part of the political spectrum has never been able to completely recover (with the only exception being the PKK, but that is a slightly different story). Over 40,000 people were accused of being terrorists or supporting terrorism in any form, most of them members of left-wing groups. The coup was a complete shock, as many members of the radical left-wing groups had actually been expecting a civil war that would lead to revolution and a complete overhaul of the political system in the country. The overhaul happened, just not the one that they had envisioned. However, I do believe that the biggest blow to the extreme left in Turkey came a bit later, with the rise of Turgut Özal and his policies. The introduction of proper capitalism together with the economic growth, marginalization of workers as a social and political force and the creation of the stronger middle class – all of that effectively limited the capability of the left to attract wider support in the Turkish society, unlike in 1960s or 1970s. In combination with the collapse of the Soviet Union, effect of the Turkish-Islamic synthesis – it led to a paralysis of the extreme left that is struggling to survive up until today. 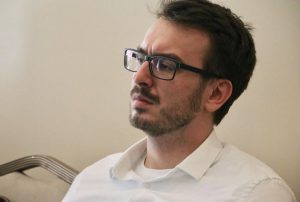 Dr. Ozan Örmeci: As a European, how would you consider life in Turkey? Are there any resemblances or striking differences between living in Europe and living in Turkey?

Matus Jevcak: It is hard to compare with Europe in general, but I can definitely compare it with life in Slovakia – the country that I am coming from. I would say that Slovaks are more reserved, especially when meeting a stranger for the first time. Turks are also much more social, spending much of their free time with their friends or family. Unlike people in Slovakia who like to complain a lot about life in general but do nothing to change their situation, Turks are willing to express their opinions and fight for their rights. Actually, one thing I like to say half-jokingly about Turkey is that it is a country of extremes – everybody has (usually) a very strong opinion about something he likes or hates. There is often no room for a compromise or middle ground 😊. I also see the difference in the way how people communicate – in Slovakia it is quite straightforward and direct (and it is even more in countries like Austria or Germany), while the Turkish culture is definitely more high-context. Of course, this is all one big generalization, but these are some of my observations.

Dr. Ozan Örmeci: In your view, what are the biggest problems of Turkish political life?

Matus Jevcak: Well, most of it is similar to what we can see in other countries all around the world. For me, the biggest problem right now is probably the level of political polarization in the Turkish society. This is a phenomenon that could threaten the cohesion of the society and in the worst case scenario even result in a civil war. Unfortunately, some elements of the political life are trying to exploit it for their own benefit and are deliberately deepening the rifts between the various segments of the society.

Dr. Ozan Örmeci: Matus, can we expect a positive agenda for Turkey-European Union relations in the near future in the midst of Russian-Ukranian War?

Matus Jevcak: There is definitely a window of opportunity widened by the Russian-Ukrainian war. Both Brussels and Ankara seem to understand the importance of each other and are somehow willing to show a positive attitude. However, I do not believe that we can expect any major breakthrough in Turkey-EU relations before the presidential and parliamentary elections in Turkey planned for 2023. Moreover, I believe that the EU has been gradually losing a part of its charm in the region, mainly due to its inability or unwillingness to act according to the values it promotes.

Dr. Ozan Örmeci: Thank you very much for your time.