Mr. Talat was present as a speaker at the panel talk, at which the US ambassador to Cyprus, high level Greek Cypriot officials, academics and officials from the European Commission were also present.[1] Around 100 members of far right party ELAM disrupted the event by shouting slogans and trying to attack the former President of the Republic.[2] According to Cyprus daily Cyprus Mail, “The group was pushed back by police and the event went ahead as scheduled. Reports said police arrested 3 people. An ELAM spokesman said it was a protest against the presence of Talat. US Ambassador to Cyprus John Koenig was also present at the event, organised by the technical university, TEPAK, Europe Direct, the EU representation, and Limassol citizens initiative for reunification.”[3] 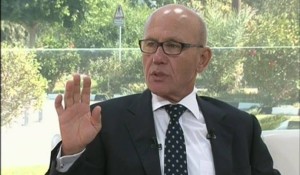 After the shock, Talat said, “We should fight against fanaticism everywhere and we should win this fight. Because if they win, the peace process in the island would be impossible”.[4] Current President of the Republic of TRNC, Dr. Derviş Eroğlu comdamned the attack by adding that “all actors who are in favor of peace should be against such attacks”[5]. The Cyprus Republic government also comdemned the attack. Government spokesman Christos Stylianides said, “We will not allow similar incidents, that bring shame upon us all, to happen again. No one will terrorise democracy and the expression of views.”[6]

ELAM, The National Popular Front, is a far right political party that was established in 2011 in Cyprus.[7] The party has been the subject of controversy in the Cypriot media and the broader political scene. It has been repeatedly accused of promoting racism and being involved in some acts of violence.[8] Although not having any success at Parliamentary or Presidential elections, ELAM represents the popular anti-settlement view in the southern Cyprus and thus appeals to a larger audience emotionally.[9] ELAM is similar to other European far right parties which seem to increase their votes constantly in elections.

The recent attack is a serious slap to settlement process in the island and shows that the process will not be easy. The problem originates back to European Union’s double-standard practice towards Turkish Cypriots who voted in favour of the Annan Plan, but were punished by the EU with the membership of southern Cyprus to the organization.

Recent discovery of hydrocarbon resources in Israel and south Cyprus and EU’s search for alternative energy resources due to its high energy dependency on Russia, made Cyprus Dispute again an important matter. Negotiation talks for settlement were started again on this February.[10] The attack could be considered as an attack to settlement process and shows that creating peace would be really difficult with groups using violence as a mean to make political propaganda. The failure of the process on the other hand, may lead to search for alternatives for the safe transportation of hydrocarbon resources of Israel and Cyprus to Europe.