Although Turkish-Israeli relations seem to have hit the bottom in the recent years[1] -especially after the “one minute”[2] and “low seat”[3] crises as well as the Mavi Marmara incident[4]-, in fact recent news in the Turkish media might be early signals of a Turkish-Israeli rapprochement in the near future. The turbulence in the Middle East due to Syrian civil war and the existence of jihadist groups in Syria and the newly discovered energy resources in the East Mediterranean as well as the Western confrontation with Russia in Ukraine and Caucasian in general shows that there is a comfortable ground for such rapprochement.

Turkish Deputy Prime Minister Bülent Arınç today announced that -thanks to efforts of American President Barack Obama-, Turkish-Israeli relations will get normalized after the local elections that will be made in Turkey on this Sunday.[5] Arınç added that after the normalization, the ambassadors in both countries may start to work normally.[6] Israeli unions on the other hand, recently announced that they removed their boycott decision for touristic visits for Turkey and the number of Israeli tourists coming to Turkey might reach its previous number in a few years.[7] These two news might not be that coincidental and might be the earlier signs of a rapprochement in the near future mainly because of the energy politics.

Newly discovered energy resources in the East Mediterranean close to south Cyprus and Israel may be the triggering reason for such rapprochement and new negotiations for the solution of Cyprus Dispute. In fact, East Mediterranean has always been thought to be a rich region in terms of hydrocarbon resources but because of the presence of resources in ultra-deep waters with more than 2 kilometers, efforts to discover these resources started in the early 21st century thanks to technological developments and the high prices in the industry which necessitates the discovery of alternative resources.[8] The first significant discovery was made by Shell Company in Egypt’s Nile Delta region in 2003.[9] The second important discovery was made by Israel in 2009 in the Tamar 1 and Dalit 1 sites. In 2010, a giant field in the Leviathan block was discovered by a consortium comprising Noble Energy, Delek Drilling, Avner Oil and Ratio Oil.[10] The huge natural gas reserves of Tamar gas field[11] near Israel was discovered in 2009. Apart from the 235 billion m3 of gas reserves in that field, Leviathan is one of the biggest natural gas oil fields which have recently been discovered, with its 450 billion m3 of gas reserves also having increased the appetite of Noble Energy toward the region.[12] Some even claim that with further seismic research, the East Mediterranean region can possibly be the second Caspian basin. Moreover, according to U.S. Geological Survey predictions, there would be 3.5 trillion m3 of gas reserves equivalent to 20 billion barrels of oil in the East Mediterranean.[13] 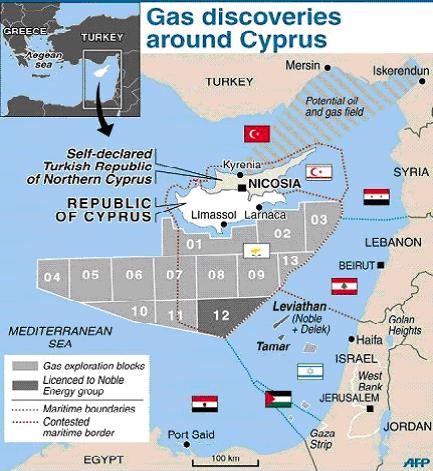 Cypriot and Israeli governments are discussing to export their natural gas through the shipping of compressed natural gas to Greece and then to the rest of Europe or through a sub-sea pipelines starting from Israel and then leading to Greece via Cyprus. According to some experts, the shipping of compressed natural gas will be too expensive in addition to the problems of safety that will be caused without Turkey’s support to the project.[14] Thus, energy politics might necessitate these two countries as well as Cyprus and Greece to work together to provide a new energy rotation to the European Union which seems to be in a serious search for alternatives to Russian natural gas due to Russian aggression in Crimea.

More recently, an Israeli daily reported that it was at least 10 companies, including two Turkish energy firms, have presented offers in the tender for the exporting of natural gas from Israel’s Leviathan gas field to Turkey through a pipeline. Bidders include Turkey’s Zorlu Group, which already holds an indirect stake in an Israeli power plant, and a joint bid by Turcas Petrol and German electricity utility RWE,  according to Israeli daily Globes.[15] The daily cited unnamed sources as saying the bids for the natural gas ranged between 7 billion cubic meters (bcm) a year and 10 bcm, “amounts that could generate $22-31 billion revenue, assuming a 15-year gas supply contract at $6 per million British Thermal Units [mmBTU], the price of natural gas in Israel’s domestic market.”[16]

Another important motivation for Turkey and Israel to cooperate might be the security risks related to the civil war in Syria and the presence of radical groups near Turkish-Syrian border. Recent terror attack in Turkey[17] shows that radical organizations in the region pose a great threat towards not only to Syrian government, but also towards Israel and Turkey. Turkey and Israel might consider a counter-terrorist cooperation in the months to come because of these safety risks targeting them.

A third motivation could be the American pressure on two governments. American President Obama was the one who achieved to restart the dialogue between two Prime Ministers Recep Tayyip Erdoğan and Benjamin Netanyahu previously. Geopolitical risks caused by Russia in Caucasian region force NATO members and Western allies to get rid of their problems and to work together on certain issues. As an ally to both countries for many decades, United States is the most disadvantaged country because of Turkish-Israeli conflict in the recent years.

However, Turkish-Israeli rapprochement might not be that easy because of certain reasons. The first reason is obviously Turkish Prime Minister Erdoğan’s harsh rhetoric towards Israel. Erdoğan uses anti-Israeli and sometimes even anti-Jewish sentiments as a way to increase his legitimacy in the Islamist groups within Turkey and outside. With Erdoğan in the picture, such rapprochement could be really difficult. However, a leftist party’s rapprochement with Israel also might not be that legitimate in the eyes of Turkish conservatives. Thus, a leadership change within the ruling Justice and Development Party (all signals point out President Abdullah Gül) or the emergence of a new center-right party which would appeal to Turkish conservatives might create a smoother transition. With Republican People’s Party (a pro-European social democratic party known with its sensitivity of secularism and Turkey’s Western orientation) at the government, this transition could still be successful but more efforts will be needed. A coalition government between RPP and Nationalist Action Party (NAP) could also work since NAP is known to be nationalist-conservative party having no prejudices against Israel.

Secondly, a change in the policy of Israel towards Palestine will also be needed for such a transition since Turkish people are really offended by the Israeli aggression towards Palestine. A leftist government or a coalition led by Israeli Labor Party could be advantageous in that case. In any scenario, the US help and involvement is crucial and absolutely needed.

[1] For an analysis see; Kısacık, Sina (2012), “The Turkish Foreign Policy and in Justice and Development Party Era and the ‘Axis Shift’ Debate”, Uluslararası Politika Akademisi, Retrieved on 25.03.2014 from http://politikaakademisi.org/the-turkish-foreign-policy-in-justice-and-development-party-era-and-the-axis-shift-debate/.

[2] In early 2009, Turkish Prime Minister Recep Tayyip Erdoğan caused a distraction with tough walk against Israel in Brussels and a walk-off from the stage in the World Economic Forum in Davos known as “one minute” crisis.

[3] On January 12th, 2010, “low seat” crisis occurred between Turkey and Israel. In a meeting between Vice Foreign Affairs Minister Danny Ayalon and Turkey’s ambassador to Tel Aviv, Oğuz Çelikkol, Ayalon did not shake the hands of Mr. Çelikkol and gave him a lower seat. After this event, Turkey called his ambassador in Tel-Aviv back.

[4] On May 31st, 2010, a serious crisis happened between Turkey and Israel. An international aid flotilla led by Humanitarian Aid Foundation (IHH) trying to get attention the embargo in Gaza was stopped by Israeli army in the international waters. The Israeli army harshly intervened in the Mavi Marmara ship and killed 9 citizens and wounded 24 people. Turkey has been demanding an apology from Turkey before the public opinion, the acceptance of an independent investigation on the attacks toward the ships and the end of blockade in Gaza from Israel.

[11] The Tamar gas field is a natural gas field in the Mediterranean Sea off the coast of Israel. The field is located in Israel’s exclusive economic zone, roughly 80 kilometres (50 mi) west of Haifa in waters 1,700 metres (5,600 ft) deep. While there have been small oil and gas discoveries in Israel over the decades, Tamar was the first large-scale hydrocarbon resource discovered in the country. It was also the first gas discovery made in geological layers dating back to the Oglio-Miocene era in the up-until-then little-explored Levant basin of the Eastern Mediterranean. Since Tamar’s discovery, large gas discoveries have been made in other analogous geological formations of the same age in the region. Since Tamar was the first such discovery, these gas containing formations have become collectively known as Tamar sands. For details see; “Tamar Gas Field”, Wikipedia, Retrieved on 31.07.2013 from http://en.wikipedia.org/wiki/Tamar_gas_field.